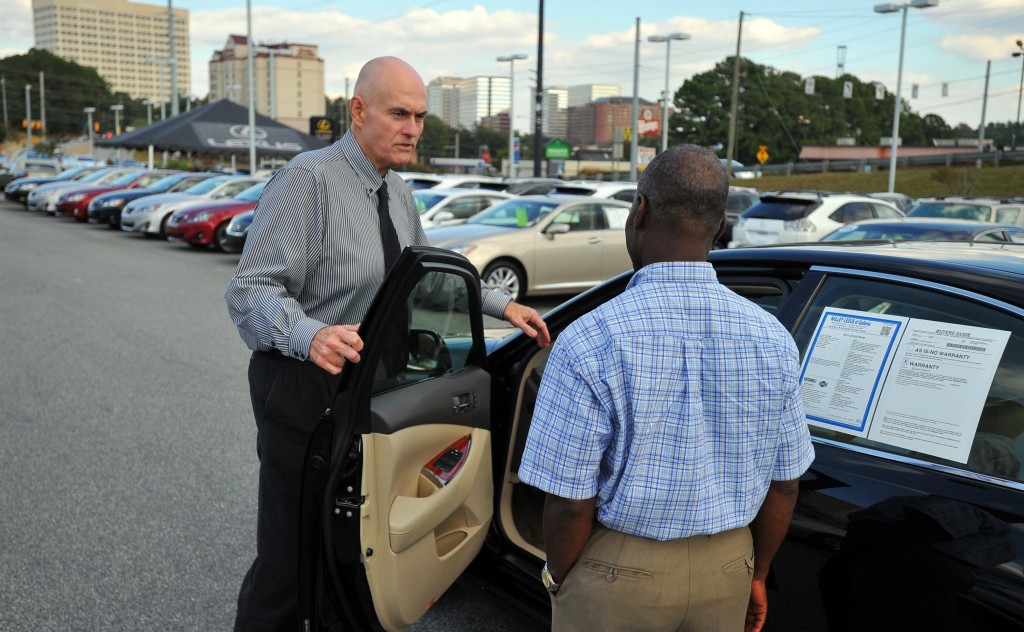 When Jennifer Williams walked into the Nalley Lexus dealership in Cobb County, Ga., on a recent afternoon, all she needed was a salesperson to provide her a good deal on her trade-in, the keys to her RX 350 SUV and a happy wave goodbye.

Williams had done research ahead of time, and already knew what cars were available on the lot, their features, price and even ownership and mileage records. She also pre-investigated available interest rates, her credit score and, most importantly, what Nalley’s competitors were offering.

“I just needed to know what you’re going to give me for my trade, talk interest rates and see if they could take a little bit off the car,” she said.

Williams is the epitome of the new car shopper, industry experts say. Unlike a decade ago, today’s car buyers walk in the door with almost as much knowledge about what’s on a lot as the sales staff. And they don’t want to spend hours negotiating or being wooed into costly upgrades.

That has made it more difficult for dealerships to make the same profits as in past years, and has pushed some to change how they compensate employees. Lexus South Atlanta, for instance, switched from paying staff a traditional commission to an hourly salary plus incentives.

“The opportunity to negotiate has almost been eliminated,” Sid Barron, general manager at Lexus South, said, emphasizing that this is especially true among young car buyers who don’t even understand the concept of negotiating. “You have to build value.”

But the industry is making up the lost revenue through stronger volume – car sales have surged since 2009 – and by capturing more of the service business. Today’s cars have become so technologically complicated that independent mechanics are being cut out because they either lack the skills to repair the vehicles or cannot afford the necessary diagnostic machinery, said Rick Nelson, an analyst for research firm Stephens.

“Dealers are also getting more aggressive on pricing, such as oil changes,” Nelson said. “They also throw in loaner cars of the quality that customers expect.”

Car buyers also should first consider their banks or credit unions for financing, she said. Some dealerships get a cut of the revenue if customers agree to go through dealer-aligned loan institutions, which often charge higher interest rates.

“That is often completely invisible to the consumer,” she said.

It’s all a far cry from the days when salespeople of all brands – from Lexus to Honda to Ford – had the upper hand. They would walk a buyer around a lot and point out different variations of a particular model, with the hope of convincing the customer to purchase a higher-priced make. The pressure would continue in the sales office, with add-ons such as undercoating and interior scotch guarding.

But that era ended when dealerships realized they could improve one-on-one relationships with customers through the internet as mobile technology allowed Americans to be online all the time. The average consumer spends 19 hours researching before a purchase, with 11.4 hours (60 percent) spent online, according to a JD Powers study.

Like all other industries, dealers accumulated email lists to blast out news of bargains, new shipments and updated models to past and interested car buyers. Service departments became savvier about updating motorists on scheduled maintenance through emails.

And dealerships’ efforts to gain an edge over their competitors led to more transparency about inventory and pricing, giving consumers more information than they had in the past.

As a consequence, online car shopping has almost eliminated the need to go from lot to lot searching for the right vehicle.

“Prior to 2006, customers visited an average of 4.1 dealerships before purchasing a vehicle,” said Craig Monaghan, president and chief executive officer of Duluth, Minn.-based Asbury Automotive Group, the nation’s fifth-largest public car dealership franchise and owner of the Nalley Automotive Group.

“Now, customers only visit an average of 1.3 dealerships prior to purchasing a vehicle,” he said. “The reduction in dealership visits makes it more important than ever to meet the consumer’s needs and expectations well in advance of them visiting our stores.”

What consumers can’t get online, they can request through email. But dealerships have to act fast. In a world where almost everyone has a smartphone and expects instant communication, a dealership’s failure to respond quickly is almost the equivalent of showing a lack of interest, experts said.

“You have to get back to them in an hour, or better, less than an hour,” said Steve Mader, owner and general manager of SouthTowne, a General Motors dealership in Newnan, Ga. “And you need to get back with a transaction price that is realistic, and other options in case you need them.”

Despite taking a hit to profits, car lot owners said they like the new, more informed customer.

“Asbury believes this upfront education is good for both the dealership and the consumer,” Monaghan said. “It allows us to build an open, honest, long-term relationship. Another benefit to such an extensive amount of research beforehand is that it can lead to a quicker purchasing process, which is mutually beneficial.”

Jennifer Williams agreed. Williams, who said she loves cars, said she improved her understanding of how the industry negotiates deals because she was burned in past purchases. Now, she often knows more than the salespeople and has little patience for staff who try to pressure her.

“I like to leave thinking that I got a good deal and that they didn’t lose money,” she said.