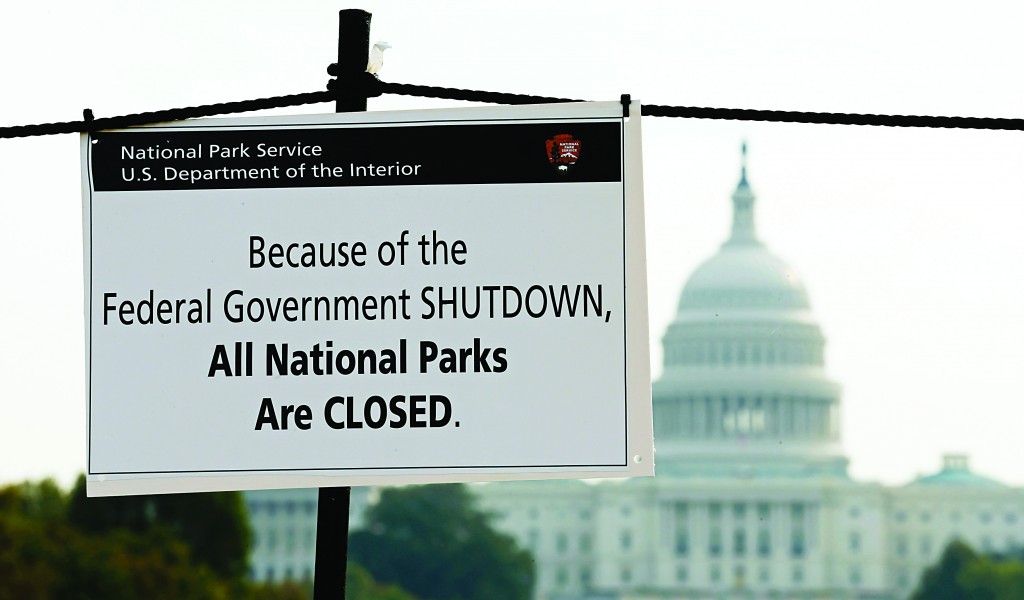 Urgent efforts to prevent an economy-tanking national default rose and then retreated with astonishing swiftness on Thursday, as House Republicans softened their long-standing demands and the White House appeared agreeable to a compromise, only for Senate Democrats to declare it unacceptable.

“Not going to happen,” declared Majority Leader Harry Reid, standing outside the White House after he and fellow Democrats met with President Obama. Reid referred to a Republican plan to leave the 10-day partial government shutdown in place while raising the nation’s $16.7 trillion debt limit and triggering negotiations between the GOP and Obama over spending cuts and other issues.

Heartened by any hint of progress, Wall Street chose to accentuate the positive. After days of decline, the Dow Jones industrial average soared 323 points on hope that the divided government was taking steps to avoid a default. Reid’s dismissive comments at the White House came at the end of the trading day.

And despite Reid’s comments, some Republicans said they might look to him to add a provision reopening the government to any debt-limit increase the House passed.

The up-and-down day coincided with a dour warning from Treasury Secretary Jack Lew, who told lawmakers that the prospect of default had already caused interest rates to rise, and that worse lay ahead.

Appearing before the Senate Finance Committee, Lew said the Treasury must pay Social Security and veterans’ benefits as well as salaries to active-duty military troops during the second half of this month. He said failure to raise the debt limit by Oct. 17 “could put timely payment of all of these at risk.”

House Speaker John Boehner led a delegation of fellow Republicans to the White House for a late-afternoon meeting with Obama, where the two sides groped for a way out of the latest in a string of crises.

“I would hope the president would look at this as an opportunity and a good-faith effort on our part to move halfway, halfway to what he’s demanded, in order to have these conversations begin,” Boehner (R-Ohio) told reporters earlier in the day.

He spoke after informing his rank-and-file that he intends to bring legislation to the floor as early as Friday to let the Treasury borrow freely until Nov. 22, contingent on Obama’s agreement to start talks on legislation to reopen the government and discuss other pressing issues.

That would leave in effect the partial government shutdown, in its 10th day Thursday, which has idled 350,000 federal workers but so far has not produced the type of widespread economic hardship that a default might mean.

Some tea party-aligned lawmakers claimed partial credit for the GOP retreat, casting it as a way of finessing one problem so they could quickly resume their own campaign to deny operating funds for the national health-care overhaul known as “Obamacare.”

At the White House, spokesman Jay Carney told reporters the president would “likely sign” a short-term extension to the debt ceiling, and did not rule out his doing so even if it left the shutdown intact.

The shutdown began on Oct. 1 after Obama ruled out any concessions that would defund, delay or otherwise change the new health-care law. He said he would be willing to negotiate on a range of issues, but only after the shutdown was ended and the debt limit raised.

For their part, Republicans drafted a long list of demands to accompany any increase in the debt limit, including some that would raise the cost of Medicare for better-off beneficiaries, make changes to the health-care law and roll back several environmental regulations.

In recent days, the focus has shifted from the shutdown to the threat of default, and Republicans have spoken less and less frequently about insisting on concessions in the health-care law.

Meanwhile, the Senate gave final congressional approval to a bill ensuring that families of fallen troops be paid death benefits, which have been halted during the shutdown.

In addition, the House voted 249-175 to finance border security and customs personnel through Dec. 15, the latest of the House GOP’s bills aimed at reviving selected programs during the shutdown.

The Senate has ignored most of the measures, saying the entire government must be restarted.