The abduction was brief but still audacious: Gunmen from one of Libya’s many militias stormed a hotel where the prime minister has a residence and held him for several hours Thursday — apparently in retaliation for his government’s alleged collusion with the U.S. in a raid last weekend that captured an al-Qaida suspect.

The brazen seizure of Prime Minister Ali Zidan heightened the alarm over the power of unruly militias that hold the weak central government virtually hostage. Many of the militias include Islamic terrorists and have ideologies similar to al-Qaida’s. The armed bands regularly use violence to intimidate officials to sway policies, gunning down security officials and kidnapping their relatives.

At the same time, the state relies on militias to act as security forces, since the police and military remain in disarray after dictator Muammar Gadhafi was overthrown and killed in 2011. The militias are rooted in the brigades that fought in the uprising and are often referred to as “revolutionaries.”

Many militias are paid by the Defense or Interior ministries —which are in charge of the military and police respectively — although the ministries are still unable to control them.

Not only was Zidan abducted by militiamen who officially work in a state body, it took other militias to rescue him by storming the site where he was held in the capital.

“The abduction is like the shock that awakened Libyans. Facts on the ground now are clearer than never before: Libya is ruled by militias,” said prominent rights campaigner Hassan al-Amin.

Zidan’s abduction came before dawn Thursday, when about 150 gunmen in pickup trucks stormed the luxury Corinthia Hotel in downtown Tripoli, witnesses told The Associated Press. They swarmed into the lobby and some charged up to Zidan’s residence on the 21st floor. 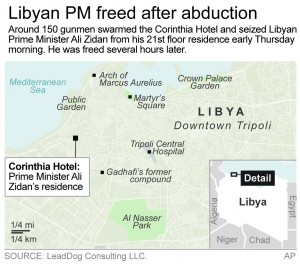 The gunmen scuffled with Zidan’s guards before they seized him and led him out at around 5:15 a.m., said the witnesses, speaking on condition of anonymity because they feared for their own safety. They said Zidan offered no resistance.

In the afternoon, government spokesman Mohammed Kaabar told the LANA news agency that Zidan had been “set free.”

Zidan later appeared at a Cabinet session that was broadcast live. He thanked those who helped free him but gave no details and avoided blaming those behind the abduction.

“We hope this matter will be treated with wisdom and rationality, far from tension,” he said. “There are many things that need dealing with.”

The motive for the abduction was not immediately known, but it came after many militias and Islamic terrorists expressed outrage over the U.S. Delta Force raid Saturday that seized al-Qaida suspect Nazih Abdul-Hamed al-Ruqai, known by his alias Abu Anas al-Libi, from the street outside his home in Tripoli.

This article appeared in print on page 2 of the October 11th, 2013 edition of Hamodia.