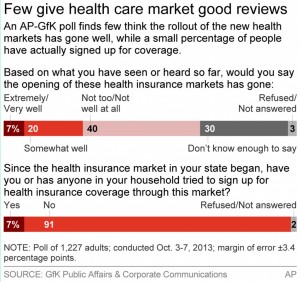 The debut of the government’s health insurance marketplaces drew a huge audience — and underwhelming reviews.

Just 7 percent of Americans say the rollout of the health exchanges has gone extremely well or very well, according to an AP-GfK poll.

The reaction was somewhat better among supporters of the new health-care law, but still middling; 19 percent said the rollout went extremely well or very well.

Among the uninsured — a key audience for the health exchanges — 42 percent said they didn’t know enough to judge how well the rollout had gone, suggesting an ongoing lack of awareness about the program in its early days.

Despite the bumpy rollout, plenty of Americans are giving the system a try.

Seven percent of Americans reported that somebody in their household has tried to sign up for insurance through the health-care exchanges, according to the poll. While that’s a small percentage, it could represent more than 20 million people.

Three-fourths of those who tried to sign up reported problems, though, and that’s reflected in the poor reviews.

George Spinner, 60, a retired government worker from Ruther Glen, Va., said he managed to create an online account and password before he got stuck. “It kept telling me there was an error,” he said.

Reynol Rodriguez, a computer technician from San Antonio, said he was able to do some comparison shopping online but computer glitches kept him from signing up.

Count Janice Brown, a semi-retired travel agent from Prather, Calif., was among those who had a positive experience.

After some initial trouble on the site, she got through to a help line and downloaded an application to buy a plan for $1,500 a month for herself and her husband. That’s $1,000 less than her current private plan.

Among those who have actually tested out the system, only about 1 in 10 succeeded in buying health insurance, the poll found. A quarter of those who tried to buy coverage weren’t sure whether they’d succeeded.

White House senior communications adviser Tara McGuinness said the administration is working around the clock “to improve the consumer experience,” and she stressed that the poll was taken just six days into a campaign over the coming months to educate people about their options.

This article appeared in print on page 3 of the October 11th, 2013 edition of Hamodia.