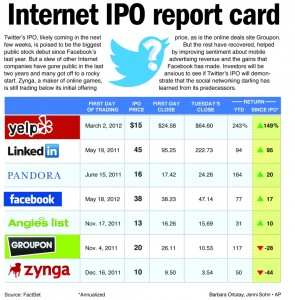 Twitter’s stock debut is the biggest coming-out party since Facebook, and Wall Street’s largest exchanges are fighting to host it.

The company has yet to announce an exchange, but when its shares go public – most likely before Thanksgiving – Twitter executives could either ring the opening bell on the floor of the New York Stock Exchange or sign Nasdaq Stock Exchange’s digital screen.

Either way, the initial public offering is much more than a photo op for the winner. Listing Twitter’s shares and overseeing their trading means adding revenue at a time when NYSE and Nasdaq are losing business and struggling to keep up with changes in trading technologies. Hosting this year’s hottest tech debut also gives the winner an edge when it tries to lure other IPOs, especially in the fertile area of social media.

Both Nasdaq and NYSE are courting Twitter heavily. Bloggers, traders and the mainstream financial media are buzzing with rumors about Twitter’s choice. On Friday, CNBC reported that Nasdaq’s CEO was visiting Twitter’s headquarters. Earlier reports said the micro blogging service was leaning toward NYSE.

Adding Twitter would be another trophy for NYSE as it continues to grab more of Nasdaq’s traditional turf in technology IPOs. Keeping Twitter from NYSE would offer Nasdaq some redemption after its disastrous job hosting Facebook’s IPO in May 2012, which resulted in lawsuits and a marred reputation.

“I’d be shocked if Twitter went to the Nasdaq,” says Kevin Landis, a portfolio manager with Firsthand Funds, who owns shares in Twitter. “The guys at Twitter want to do it as differently from Facebook as they possibly can, and that boils down to even what exchange … to trade on.”

Both exchanges are certain they’re the better candidate.

“We feel very confident in our positioning, and we would hope we have a great shot at Twitter,” says Bruce Aust, executive vice president at Nasdaq OMX Group, the parent company of the exchange. Aust made the comments at Bloomberg’s Next Big Thing Summit last month.

U.S. publicly traded companies list their stock with either Nasdaq or the NYSE, but neither exchange is guaranteed the stream of revenue it once earned. That’s because listing as a NYSE or Nasdaq company doesn’t mean traders will actually buy and sell stock on those exchanges.

For years, traders have been shifting their business from the major exchanges to smaller, more low-cost systems like Direct Edge or BATS. Both exchanges also have lost trading to what’s known as “dark pools.” These less-regulated trading platforms are run by investment banks and allow large customers to fill large trading orders without alerting the broader market.

The average number of shares traded on the NYSE last month was around 3.1 billion a day, compared with the roughly 6.3 billion shares traded this time five years ago. The Nasdaq has seen similar volume declines.

Every time a share trades, the exchange where the company is listed charges various, extremely small fees. Some of these fees are a fraction of a penny, but when there are billions of shares traded every day, those pennies add up. If a listed share trades somewhere else, the fees are lower.

NYSE’s parent company made $2.3 billion in transaction and clearing fees in 2012, while the Nasdaq made $2.56 billion off similar services last year.

Other money-makers for exchanges include investor-relations software packages and networking events, which can also influence where a company decides to debut.

Picking Nasdaq or NYSE is like choosing an elite fraternity, says Leslie Pfrang, a principal with Class V Group, an advisory firm that specializes in helping companies through IPOs. Each exchange offers events with their other listed companies, a prime way to drum up business.

“It’s almost like joining an organization or club where you need to feel a part of it,” Pfrang says.

Pfrang believes the two exchanges are equally appealing. It boils down to whether Twitter wants to be associated with its tech counterparts or if it wants to trade among its customers, often consumer brands.

The choice used to be clearer for a company. The NYSE was home to bigger companies, typically in industries like consumer products and industrials. Nasdaq was home to more tech and biotechnology companies.

The way the two exchanges conducted trading used to be different as well. The NYSE used to have specialists, human beings whose primary job was to maintain an orderly market for a particular stock. At Nasdaq, banks used computer programs to perform a similar role to specialists on the floor of the NYSE.

Now, the human-centric NYSE has embraced electronic trading and the Nasdaq has hired staff to put a human touch on the world’s first all-electronic stock exchange. Nasdaq market observers can now step in and help reduce volatility.

Even the most basic distinction between the exchanges – the ticker symbols companies once used – has blurred. NYSE companies had tickers up to three letters, and Nasdaq had four-letter symbols. The NYSE now allows four-letter tickers.

While NYSE wants Twitter to help increase its share of technology IPOs, Nasdaq may be looking for redemption.

Nasdaq’s Facebook IPO was marred by a series of costly technical problems. Trading orders failed to go through and initial trading of Facebook’s shares was delayed. As a result, the Securities and Exchange Commission in May fined the exchange $10 million, the largest ever levied against an exchange.

“Think of it this way,” says Pfrang. “If all your friends are joining a particular club, you would want to join that club as well.”