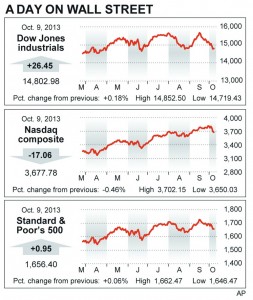 Signs that lawmakers are making moves to end a stalemate in Washington and avert a U.S. government debt default halted a slump on the stock market Wednesday.

President Barack Obama is making plans to talk with Republican lawmakers at the White House in the coming days as pressure builds on both sides to resolve their deadlock over the federal debt limit and the partial government shutdown before the U.S. Treasury’s borrowing authority is exhausted next week.

The S&P 500 index gained 0.95 points, or 0.1 percent, to 1,656.40. The index lost 2 percent in the first two days of this week as concerns grew that politicians would fail to reach a deal before the government hits its debt ceiling on Oct. 17.

The pace of companies reporting third-quarter earnings is also picking up this week, giving investors better insight into how corporate America is doing.

Yum Brands, the owner of KFC, Taco Bell and Pizza Hut, was the biggest decliner in the S&P 500 index after its earnings fell short of Wall Street’s expectations. The discount retailer Family Dollar also slumped after giving a cautious earnings forecast for next year.

“It looks like there has been some disappointment in the early earnings already,” said Colleen Supran, a principal at San Francisco-based Bingham, Osborn & Scarborough, an investment adviser and asset management company.

In a move that many investors regarded as a positive for stocks, the White House nominated Federal Reserve Vice Chair Janet Yellen for the top position at the central bank.

Yellen’s appointment “does add certainty, in the absence of certainty for stocks,” said Jim Russell, a regional investment director at U.S. Bank. “It perhaps keeps a little bit of a safety net under equities for the near, or intermittent, term.”

The Federal Reserve is buying $85 billion of bonds a month to hold down long-term interest rates and bolster the economy. The central bank’s stimulus has been a crucial support for a stock market rally that began more than four years ago.

Investors also got more insight into the Fed’s thinking Wednesday after the central bank published minutes from its September meeting Wednesday.

Nearly every member of the Federal Reserve thought the central bank should see more economic data before slowing its bond purchases. But worries about whether a delay would confuse markets made the decision a close call. Many expected policy maker to start cutting stimulus.

In government bond trading, the yield on the 10-year Treasury note rose to 2.67 percent from 2.63 percent.

Much of the concern about a potential default by the government bond has been concentrated in short-term government securities known as T-bills.

Portfolio managers at Fidelity Investments have been selling their short-term government debt holdings over the last couple of weeks. The nation’s largest manager of money market mutual funds said Wednesday that it no longer holds any U.S. government debt that comes due around the time the nation could hit its borrowing limit.

The dollar rose against the euro and Japanese yen.

This article appeared in print on page 8 of the October 10th, 2013 edition of Hamodia.