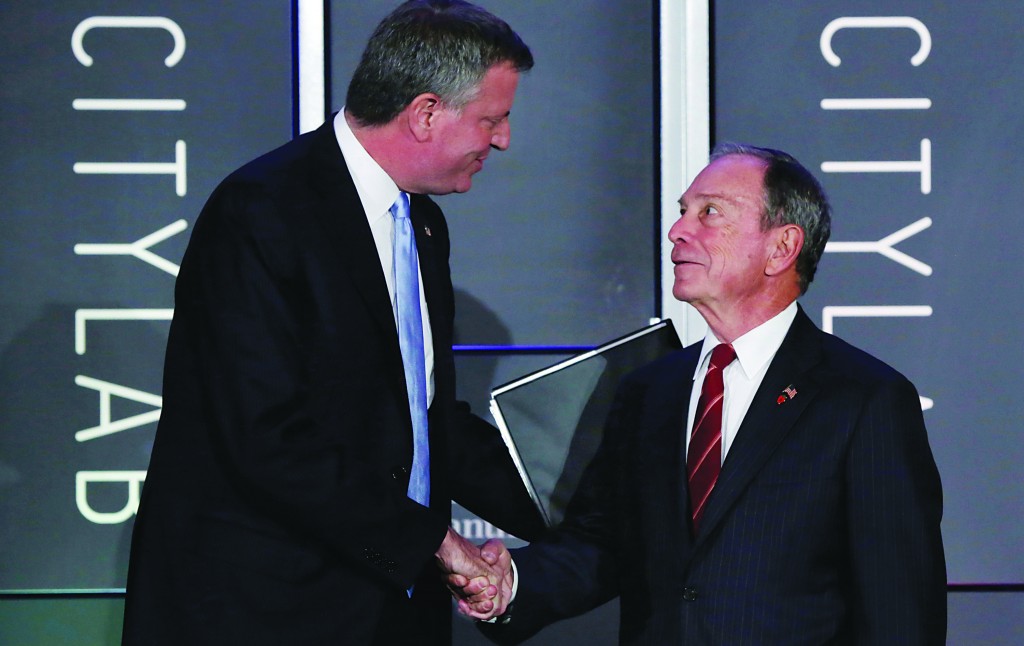 Though the city’s overall crime rates have plunged dramatically during outgoing Mayor Michael Bloomberg’s three terms, Lhota suggested a recent spike in crimes could foreshadow what would happen if de Blasio is elected.

He denounced the shooting death of a one-year-old Brooklyn boy last month, a stabbing spree in a Manhattan park, and the violence that erupted last week when a motorcycle gang attacked an SUV driver who had his wife and toddler in the car.

“An entire nation, if not the entire world,” Lhota told the Association for a Better New York, “was stunned, as a man who was just trying to celebrate his wedding anniversary was brutally beaten by a biker gang — a wilding by bikers — in front of his family, on the West Side Highway.”

Lhota’s use of the highly charged word “wilding” evoked an infamous 1989 case in which a jogger was brutally attacked in Central Park. Five teenagers were convicted in the assault, which was dubbed a wilding in the media. The convictions were overturned, but the sense of lawlessness that surrounded the city during that period helped propel Lhota’s old boss Rudy Giuliani’s election four years later. 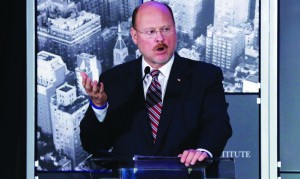 The pro-business Association is generally friendly territory for Republicans, and Lhota was warmly cheered at the speech’s end. However, the turnout was half the size that heard de Blasio, who leads Lhota by 50 percentage points, last week.

Lhota repeatedly assailed his rival’s positions on charter schools, tax increases, and the liberal Democrat’s claim last week that he was a “progressive activist fiscal conservative.”

“I’m going to start with a confession — my name is Joe Lhota, and I am a fiscal conservative,” is how the former head of the city’s transit agency opened his speech.

Lhota repeated many of those same themes hours later during a speech at City Lab, an urban policy conference in part sponsored by Bloomberg’s philanthropic organization. He noted that his current deficit in the polls “reminds me of the Grand Canyon” but pledged that the gap would close during a trio of upcoming debates.

The two were warmly introduced by Bloomberg.

In papers filed Tuesday with the state Board of Elections, former Rep. Bob Turner (R-N.Y.) said he only lost a party election to take over the Queens Republican party since the county called a snap election in middle of a workday, and being Simchas Torah, denied Orthodox Jews the opportunity to vote.

Incumbent Chairman Phil Ragusa held on to his seat in the face of an ouster movement led by a longtime foe, Councilman Eric Ulrich. The southern Queens lawmaker had sought to install a new chairman for three terms already, losing each time. But this time, with Turner, who stunned the nation in 2011 by winning a Democratic seat in a special election, he decided to fight back.

Turner wrote in the filing he believes the election was “stolen.”

Having won the Democratic primary and runoff for New York City public advocate with no Republican foe in the general election, Councilwoman Letitia James said Tuesday she will not ask for public matching funds in her race against two unknown and underfunded candidates.

“It’s not necessary, and I recognize that the individuals who are running for this office have raised little if any funds,” said James, who is poised to become the first African American woman to hold citywide office. “And so I think we should return those funds to the taxpayers in the city of New York.”

James, who last week defeated state Sen. Daniel Squadron in a bitterly contested runoff, said she is taking the election seriously, despite the fact that six out of seven of her challengers have yet to raise any campaign funds.

“We still have an election to get through,” she said. “I really don’t want to take that for granted.”

Were James to have accepted the $150,000 in taxpayer funds, it would have created a stir among good government groups, who were already seething at the $13 million cost to hold the runoff for the $2.2 million a year public advocate position. Polls show that most New Yorkers are unfamiliar with the post or what it does, and feel it replicates the job of city councilmen or the 311 call center.

If Bill de Blasio would become the city’s next mayor, warned Republican state chairman Edward Cox on Tuesday, he would be positioned for a future presidential run from the far left wing of the Democratic Party.

“If he were elected, he will very quickly become a candidate for president,” Cox said in a radio interview.

Cox appears to be seeking to scare the city’s moderate Democrats into supporting his preferred candidate, Republican Joe Lhota.

Thousands of charter school supporters marched Tuesday across the Brooklyn Bridge in a show of strength directed at Bill de Blasio, a Democrat who has said he would charge rent to some charter school operators that now get space in public school buildings for free.

“I’m a firm believer that we need to reward excellence, not punish it by having us pay rent for our schools,” said Sulma Arzu-Brown, the mother of a fourth-grader at Girls Prep Bronx, an all-girls charter school.

In addition to charging rent, de Blasio favors a moratorium on forcing traditional public schools to share their buildings with charter schools. A spokesman said Tuesday that the candidate “will work with all our schools, but he believes that well-resourced charter networks should pay for the use of school space, as charter schools do across the country, and he’ll put a moratorium on co-locations until we can better assess their impact.”

In a sharply worded statement later Tuesday, Lhota charged that de Blasio’s opposition to charter schools came from his efforts to gain support from the teachers’ union.

“The UFT has bought and paid for Bill de Blasio, as New York City school kids are sold down the river,” Lhota said.

The statement cited a news report that the United Federation of Teachers joined other unions to form a super-PAC slated to raise $2 million in support of de Blasio.

“Bill de Blasio and his special interest friends will do anything to protect the status quo that is failing our children,” Lhota said. “You are not a progressive if you oppose charter schools. Charter schools are the most progressive thing happening in public education right now.”

Marchers chanted “No rent!” as they marched from Brooklyn to City Hall. Organizers with Families for Excellent Schools said more than 10,000 people participated.

Some charter schools, including the Success Academy chain founded by former City Council member Eva Moskowitz, closed for the morning so students and teachers could participate.

Brooklyn charter school parent Christal Buxton told a news conference outside City Hall that she marched “because we want parent choices to be respected and protected by the next mayoral administration.”

With just a month to go until voters choose Mayor Michael Bloomberg’s successor, the two leading candidates have adopted decidedly different campaign strategies. It’s become a battle of running out the clock versus hogging the mic.

Democrat Bill de Blasio, who enjoys a comfortable lead in the polls, seems content to do very little actual politicking, even dodging the media. His Republican rival, Joe Lhota, has chosen not to play up his managerial experience as the city heads toward a fiscal crisis. Rather, he has been attacking de Blasio for a trip he made to Nicaragua in the 1980s to support the left-wing Sandinistas.

From a frenetic primary schedule with four or five campaign events crammed into the day, since de Blasio was nominated the maximum number of events he held in a day was two, and he only did that twice. On five days he held no events at all. And his sessions with reporters have become shorter and less frequent.

“I have never seen a Rose Garden strategy work,” Lhota said, referring to the tactic of staying within the White House Rose Garden to campaign, a practice some attribute to President Jimmy Carter. “What will win this election is when voters understand his vision for New York, which he’s not talking about, and my vision for New York, which I am talking about day in and day out. Let’s make this a real campaign.”

Political observers are split on whether the less-is-more strategy makes sense for the race’s front-runner.

“He’s going to run out the clock and make sure the other guy can’t get any yardage,” said Hank Sheinkopf, a Democratic consultant unaffiliated with de Blasio’s campaign. “With these polls, all he has to do is show up on Election Day. Don’t say a word. If he says a word and gets in trouble, he makes it interesting.”

David Birdsell, dean of the School of Public Affairs at Baruch College, says the strategy “means the only news is your opponent’s news. And if he’s a deft candidate, he can take advantage.”

But Lhota’s tactical campaign decisions have been puzzling to many observers, including GOP insiders. Lhota has downplayed his managerial resume, seizing instead on a media report about de Blasio’s time as a Sandinistas sympathizer. He also claimed that de Blasio’s campaign theme of “a tale of two cities” was “directly out of the Marxist playbook.”

That line of attack appeared to go nowhere in a liberal city where Democrats outnumber Republicans 6 to 1, as de Blasio’s lead in the polls increased from around 40 percent to 50 percent in the week after the Sandinistas story appeared.

“The problem is that Lhota doesn’t have the resources, so if he gets a hook from the press, that’s a plus for him, and considering the polls, he needs any free press he can get,” said Republican pollster John McLaughlin.