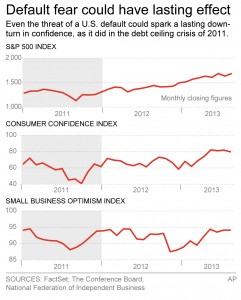 Here’s the scariest thing about the looming deadline to raise the U.S. government’s borrowing limit: No one knows precisely what would happen if the limit is breached.

The possible consequences are dizzyingly complex. But they’re all bad. Most ominously, the government might fail to make interest payments on its debt. Any missed payment would trigger a default.

Financial markets would sink. Banks would slash lending. Social Security checks would be delayed. Eventually, the economy would almost surely slip into another financial crisis and recession.

Even if the government managed to make its interest payments, fears about a default would likely cause investors to dump Treasurys and send U.S. borrowing rates soaring.

The financial world is holding out hope that that grim scenario will compel Congress to raise the debt limit and avert a default. Here are questions and answers about the government’s borrowing limit:

Q. What exactly is it?

Q. How close are we to the limit?

A. The national debt actually reached the limit in May. Since then, Treasury Secretary Jacob Lew has made accounting moves to continue financing the government without further borrowing. But Lew says those measures will be exhausted by Oct. 17. The government will then have to pay all its bills from its cash on hand – an estimated $30 billion – and tax revenue. The cash and tax revenue aren’t likely to be enough. Lew has said the government’s daily spending can run as high as $60 billion.

A. The government could pay all its bills for a few days, according to the nonpartisan Congressional Budget Office. But sometime between Oct. 22 and Oct. 31, the $30 billion would run out. The date isn’t exact because it’s impossible to foresee precisely how much revenue the government will receive and when.

Q. When it runs out of cash, does the government default?

Many experts think that to avoid a default, Treasury would make payments on the debt its top priority. The House has approved a bill to require such “prioritization.” The Senate hasn’t passed it, though. And President Barack Obama has threatened to veto it.

In any case, making some payments and not others is harder than it might sound. Treasury makes roughly 100 million payments a month. Nearly all are automated. Without any cash in reserve, a minor glitch could cause Treasury to miss a debt payment – and default.

“Treasury would do everything in their power to not miss a debt payment,” says Donald Marron, an economist at the Urban Institute and a former economic adviser to President George W. Bush. “But when you’re in untested waters under a great deal of stress, bad things happen.”

Even if the government managed to stay current on its debts, it would fall behind on other bills. These include Social Security benefits, federal employees’ pay and payments to contractors.

There are legal and political obstacles, too. The government is legally obligated to pay contractors. If not, they could sue for non-payment. And how long would members of Congress stand by as bondholders in China and Japan were paid interest while Social Security and veterans’ benefits were delayed?

Treasury officials looked into such prioritization during the last showdown over the borrowing limit, in 2011. Their conclusion: “There is no fair or sensible way to pick and choose among the many bills that come due every day,” according to a report by Treasury’s inspector general.

A. No. The Federal Reserve, an independent agency, is responsible for creating money. The government funds itself through tax revenue and borrowing.

Q. What else could Treasury do?

A. It could make its interest payments first – then delay all other payments until it collects enough tax revenue to make a full day’s payments. That would avoid choosing among competing obligations.

But that would lead most other payments to be delayed. Example: Social Security benefit payments worth about $12 billion, scheduled to be paid Oct. 23, would be delayed for two days, according to an estimate by the Bipartisan Policy Center. Tax refunds slated for Oct. 24 would probably be delayed until Oct. 28.

And on Nov. 1, nearly $60 billion in Social Security benefits, Medicare payments and military paychecks are due. With no increase in the borrowing limit, those payments would likely be delayed, possibly for up to two weeks.

Q. Would that avoid a default?

A. Impossible to say. One problem is that the government would likely have to pay higher interest on new debt. Consider: On Oct. 24, the government must redeem $93 billion in short-term debt. Normally, it sells new debt to pay off old debt. This step doesn’t increase total debt, so it would still be allowed even if the borrowing limit wasn’t raised. Yet given the risk of a default, investors would demand higher rates on new U.S. debt. Short of cash, the government might be unable to pay off its maturing debt. The result: a default.

Q. Could the president just ignore the debt limit?

A. Some experts say he could. The 14th Amendment to the Constitution says, “The validity of the public debt of the United States, authorized by law … shall not be questioned.” But the White House has said its own lawyers don’t think he has the authority to do so. Nor is it clear that many investors would buy bonds issued without congressional approval.

Q. Are global investors panicking yet?

A. The stock market has drifted lower over the past couple of weeks. But investors aren’t panicking. And long-term Treasury yields have been mostly unchanged. Stocks could sink further just before Oct. 17 if the government remains partially shut and no sign of a deal on the debt limit seems near. Investors would likely also dump Treasurys.

“There would be a rush to the door,” predicts Steve Bell, an analyst at Bipartisan Policy Center.

Interest rates on some short-term Treasurys have risen slightly in the past week. That shows that the deadline might be making some investors nervous. Bell’s group estimates that the 2011 fight over the debt limit inflated federal borrowing costs by $1.3 billion, or about 0.5 percent, that year. Over 10 years, the estimated cost comes to nearly $19 billion.

Q. What would the economic impact of all this be?

A. Many foresee a nightmare. No longer able to borrow, the government could spend only from its revenue from taxes and fees. This would force an immediate spending cut of 32 percent, the Bipartisan Policy Center estimates.

If the debt limit wasn’t raised through November, Goldman Sachs estimates that government spending would be cut $175 billion. That’s equivalent to about 1 percent of the economy.

On top of that, stock markets would likely fall. Household wealth would shrink. Consumer confidence could plunge. Americans would cut back on spending. Higher rates on government debt would raise other borrowing costs, including mortgage rates.

Q. Isn’t the fight over the debt limit about an out-of-control budget deficit? Doesn’t government spending need to be cut?

A. This year’s deficit will likely be the smallest in five years, thanks to higher tax revenue and government spending cuts. The CBO projects that the deficit will be $642 billion for the budget year that ended Sept. 30. Though still large by historical standards, that compares with the four previous years of $1 trillion deficits. Many economists think it’s healthier for spending cuts to be made gradually – rather than from a huge and immediate cut of the kind that would follow a breached debt limit.

Q. Why is it potentially catastrophic for the government to miss a payment on its debt and default?

A. In part because the repercussions would be felt worldwide by a global economy that still isn’t at full health. Banks in the United States and overseas use Treasurys as collateral when they borrow from each other. If Treasurys were no longer seen as risk-free, it would disrupt borrowing and jolt credit markets. A financial crisis like the one in 2008 could follow.

Banks also hold much of their capital reserves in Treasurys. If they fell in value after a default, banks would have to cut back on lending.

“A default is an unacceptable event,” says Judd Gregg, CEO of SIFMA, a Wall Street lobbying group, and a former Republican senator. “It will have an incredibly negative effect on the markets and …everyday Americans.”