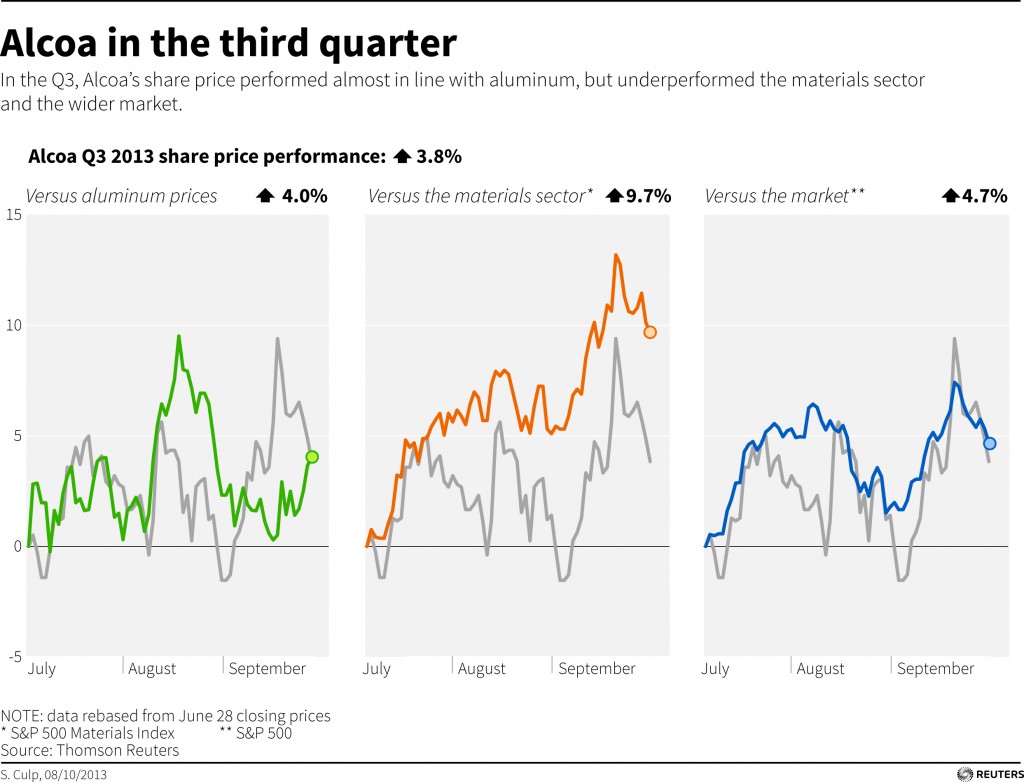 Alcoa swung to a third-quarter profit despite lower aluminum prices, as it was lifted by demand from auto makers and by cost-cutting.

The results beat expectations, and the shares climbed in after-hours trading.

With the world awash in aluminum, Alcoa has been idling plants to cut smelting capacity. That helped the company cut its production costs by 9 percent, more than enough to offset a 7 percent drop in the cash price of the metal on the London market.

The company said that excluding $96 million in restructuring and other one-time costs and gains, it would have earned 11 cents per share. Analysts forecast profit of 5 cents per share, according to FactSet.

Alcoa credited higher productivity and strong results in its engineered-products and rolled-aluminum units, which now account for more than half its revenue. The company sells rolled aluminum sheets to car makers, a business that it expects will grow rapidly as manufacturers boost fuel mileage by producing lighter vehicles. Alcoa is expanding a rolling mill in Tennessee that serves the auto market.

The company said that the commodity end of its business – mining and smelting – performed better in a tough market.

“Our performance this quarter shows our repositioning of the company is on the right path,” Chairman and CEO Klaus Kleinfeld said in a statement.

Alcoa used to be considered the leadoff company for earnings season because it was the first member of the Dow Jones Industrial Average to report results each quarter. But the Dow index operators dropped Alcoa last month, due partly to its sagging stock price.

Still, investors are likely to keep watching Alcoa for hints about demand for aluminum, a key material in airplanes, automobiles and many consumer products.

The company stood by its forecast of a 7 percent increase in worldwide aluminum demand this year.

Last week, Deutsche Bank downgraded the stock to “Sell” from “Neutral” and suggested that the shares could lose nearly one-third of their value over the next year. The bank’s analyst cited a deteriorating outlook for Alcoa’s aluminum business.