President Barack Obama turned up the political pressure on Republicans on Tuesday, saying he would be willing to negotiate on budget issues only after they agree to re-open the federal government and raise the debt limit with no conditions.

At a news conference, an unbending Obama said he would not hold talks on ways to end the fiscal impasse under threat from “more extreme parts of the Republican Party.”

“If reasonable Republicans want to talk about these things again, I’m ready to head up to the Hill and try,” Obama told reporters.

“But I’m not gonna do it until the more extreme parts of the Republican Party stop forcing (House Speaker) John Boehner to issue threats about our economy. We can’t make extortion routine as part of our democracy.”

Obama’s comments followed an earlier phone call to Boehner, who had adopted a slightly more conciliatory tone in comments to reporters after a meeting with House Republicans.

“There are no boundaries here. There’s nothing on the table, there’s nothing off the table,” Boehner said, making no mention of his recent demands to delay parts of Obama’s healthcare law in return for approving funds to end the government shutdown.

House Republicans emerged from their meeting saying they would insist on deficit-reduction talks with Obama as a condition for raising the federal debt limit, but some signaled they might pass short-term legislation to avert a default in exchange for immediate talks.

“If we have a negotiation and a framework set up, we can probably reach a way to raise the debt ceiling while the negotiation is in progress. But nobody is going to raise it before there is a negotiion,” Representative Tom Cole of Oklahoma said.

The bitter fiscal stalemate has shut down the federal government for eight days and threatens to prevent the raising of the country’s $16.7 trillion borrowing limit before an October 17 deadline identified by Treasury Secretary Jack Lew.

The possibility the government could default on its debt sparked fears of potential global economic havoc, with foreign creditors and the International Monetary Fund’s chief economist warning of the potential consequences.

“I think what could be said is if there was a problem lifting the debt ceiling, it could well be that what is now a recovery would turn into a recession or even worse,” IMF chief economist Olivier Blanchard said.

Obama said he did not think the crisis would create lasting international damage. “As I said, if we deal with this the way we should, then, you know, folks around the world will attribute this to the usual messy process of American democracy but it doesn’t do lasting damage.”

Investors remain skeptical the parties are ready to resolve the standoff and are exhibiting increasing anxiety as the deadline for raising the debt ceiling approaches.

One of the stock market’s most closely watched measures of investor nervousness, the Chicago Board Options Exchange Volatility Index, on Tuesday surged to its highest level since late June. The Standard & Poor’s 500 index was down 1.2 percent in late afternoon trading.

In the U.S. Treasury market, the sale of $30 billion of 1-month bills maturing November 7 — not long after the government could run out of cash unless the debt ceiling is raised — met with weak demand that pushed bill interest rates to a five-year high.

Japan’s finance minister said a failure by the United States to quickly resolve its political deadlock over government finances could damage the global economy.

“The U.S. must avoid a situation where it cannot pay (for its debt) and its triple-A ranking plunges all of a sudden,” Japanese Finance Minister Taro Aso told reporters after a cabinet meeting.

“The U.S. must be fully aware that if that happens, the U.S. would fall into fiscal crisis,” he said in the latest sign that Japan and China, the biggest foreign creditors to the United States, are worried the fiscal crisis could harm their trillions of dollars of investments in U.S. Treasury bonds.

The U.S. Chamber of Commerce, a traditional supporter of pro-business Republicans, also warned about further delays in reopening the federal government and raising Treasury’s borrowing authority.

“The debt ceiling specifically must pass on a timely basis to avoid inflicting substantial and enduring damage on the U.S. economy,” said Bruce Josten, the group’s executive vice president.

Polls show growing public concern over the impasse, with Republicans getting slightly more of the blame.

A Reuters/Ipsos poll on Tuesday found the percentage of Americans concerned about the shutdown rose to 75 percent from 66 percent last week. Blame for Republicans grew to 30 percent from 26 percent, with the level of blame for Obama and Democrats at 19 percent, up from 18 percent.

Meanwhile, Republican leaders unveiled a proposal for a 20-member committee to make recommendations on a debt limit increase and look at ways to rein in the country’s deficits, but Democrats quickly rejected the idea.

Under the legislation, the Republican House would name 10 members to the panel while the Democratic-led Senate would name the other 10. The panel would also make recommendations on a measure to fund the government for the 2014 fiscal year, ending the shutdown.

The plan is reminiscent of a failed 2011 “supercommittee” of Republicans and Democrats from the House and Senate that was asked to find trillions of new budget savings.

Obama was among the skeptics: “I don’t know that we need to set up a new committee for a process like that to move forward.”

Despite widespread warnings about failing to raise the debt limit, some House Republicans dismissed the prospect of a first-ever default.

“There’s no way to default. There is enough money coming into the Treasury to pay interest and roll over principal,” said Representative Justin Amash of Michigan, a favorite of the smaller-government tea-party wing of the Republican Party.

Asked about warnings of catastrophic consequences if the debt limit is not increased, Amash told reporters: “I say it’s patently not true what they are saying.”

A Democratic aide said Democrats were hopeful they could get 60 votes needed to overcome procedural hurdles in the 100-member Senate and pass the debt ceiling bill with no strings attached. 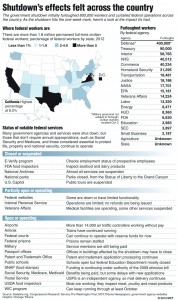 This article appeared in print on page 1 of the October 9th, 2013 edition of Hamodia.