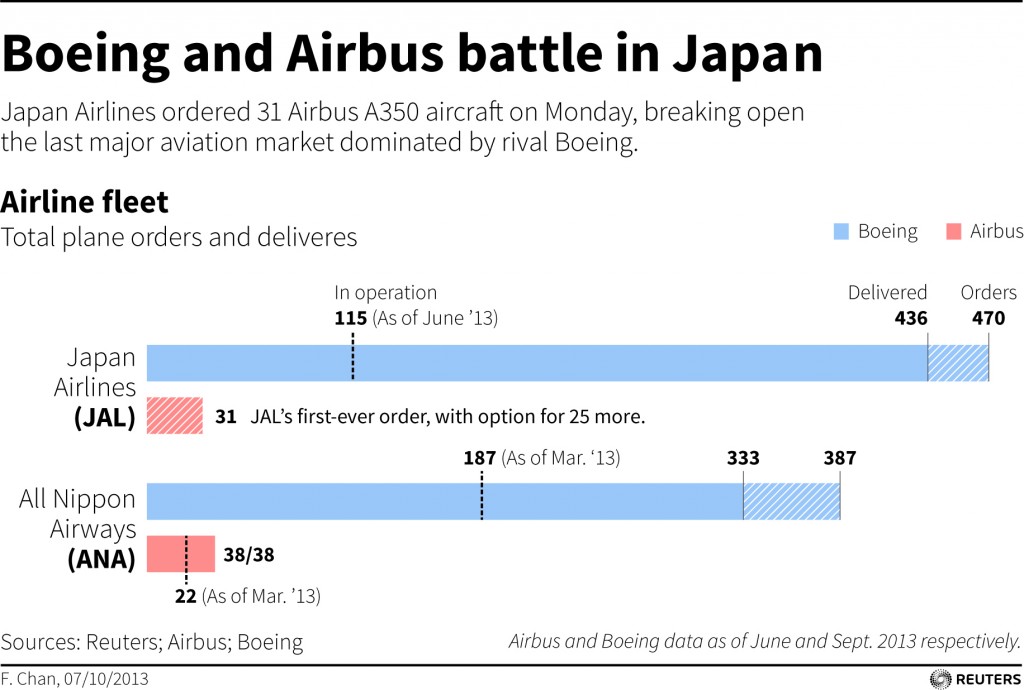 Usually, when Japanese airlines need to buy a big plane, they go to Boeing. But not this time.

Monday’s deal is the first for the A350 in Japan, and marks a big change in policy for JAL. Boeing had been the airline’s major supplier for decades, and has dominated Japan’s aviation market for decades.

“If there’s one place Boeing could have regarded as a secure market, it was Japan,” said aerospace consultant Richard Aboulafia of the Teal Group.

The order is worth 950 billion yen ($9.5 billion) at list prices, although discounts are common. Some analysts even think that JAL may be getting the planes for below cost as Airbus looks to make inroads in Boeing’s domain.

The U.S. and Japan have been big trading partners since the end of World War II. And to strengthen its ties with Japanese airlines, Chicago-based Boeing has been shifting more and more work over the years to Japanese suppliers. About one-third of its new 787 is built in Japan.

Choosing suppliers that give Boeing “a market access advantage” is an “important consideration,” said Kent Fisher, Boeing’s supply chain chief, at a presentation in May. “We’re not going to shy away from that. That is an issue that we consider in the process, but it’s not the only issue.”

Boeing will have the right planes to compete with the A350, but it’s taking too long to finalize their designs so they can book firm orders, Aboulafia said. It plans updates for its large, long-haul 777, as well as a longer version of its new long-range 787, but neither design has been finalized to the point that Boeing can take orders.

“If this isn’t a wake-up call, why not just stay in bed, because you’ve just been hitting the snooze button over and over again,” Aboulafia said.

JAL and Japan’s other big airline, All Nippon Airways, both had to wait through long delays before Boeing delivered 787s in 2011. More 787s fly with Japanese airlines than anywhere else, so the impact of the 787’s grounding for battery problems this year was worst for the Japanese airlines.

But JAL president Yoshiharu Ueki said the grounding wasn’t a factor in buying the Airbus plane. He repeatedly said the long-range, twin-engine wide-body A350 was chosen because it was the “best match for our needs.”

Although ANA flies some smaller Airbus planes, the long-haul fleets at both airlines have been Boeing-only. Airbus has been eager to break into the Japanese market.

Will Horton, senior analyst at CAPA Centre for Aviation, thinks JAL likely got a good discount from Airbus, perhaps buying the planes at or below cost.

JAL has wanted an aircraft like the A350, which is smaller than Boeing’s 747 jumbo jets but slightly bigger than the 787, Horton said.

The new A350s are due to arrive in 2019. Ueki declined to give the specific flight routes where these jets will be used, but said they will basically take over the routes of retiring 777s.

Boeing said Monday’s deal did not hurt its relationship with JAL.

“Although we are disappointed with the selection, we will continue to provide the most efficient and innovative products and services that meet longer-term fleet requirements for Japan Airlines,” it said in a statement. “We have built a strong relationship with Japan Airlines over the last 50 years and we look to continue our partnership going forward.”

JAL is a special kind of carrier in Japan, because of its close ties with the government. But Ueki said JAL did not consult the government or other parties in making its decision.

JAL fell into bankruptcy three years ago. It emerged last year in one of the biggest IPOs in Japanese history, following a government bailout and a wide-ranging restructuring.

The carrier was long the symbol of Japan’s economic rise. However, in recent decades, it was hobbled by a bloated workforce, unpopular routes and safety lapses.