A Call to Action

By Judah I. Septimus, Esq., cpa 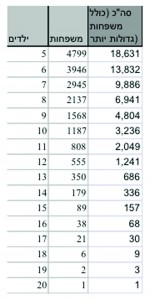 Two weeks ago this newspaper published an article titled “What Should We Do?” It described the current devastating crisis in Israel: Families who don’t know how to put bread on the table; children going to sleep hungry; parents at a loss to help them; a government that ignores the human toll of its misguided policies.

The article ended: “Let’s share ideas and pool our thoughts and resources to prevent an unspeakable tragedy in Israel.”

The response was overwhelming. Some of it was published in the “Letters” section of last week’s Hamodia. All agreed that now is the time to act! But what should we do?

Here is our answer. It’s not a theory. It’s a thought-out, structured program that is ready to go!

What Is the Goal?

There are currently over 30,000 families with five children or more — including kollel, working, and unemployed families — whose child support has been cut by at least $2,000 a year. This money must be replaced. We will not discriminate among families; we must help them all. Any large family whose child support was cut will receive our funds.

My father, z”l, taught me a very powerful lesson in life: “Yeder Yid is ta’yer — Every single Jew is precious!”

Many years ago, on a frigid winter morning in Yerushalayim, David Leib Cohen approached me after davening at a Kosel vasikin minyan. He wanted to show me a shocking scene. He took me to see a Sephardic family with many children, all living in a one-bedroom apartment without heat! He asked me to contribute an electric heater. Of course I did. Who wouldn’t?

Since then, David Leib Cohen, together with Rabbi Chaim Goldberg and their colleagues, have built a powerful chessed network reaching every needy community in Israel. Their integrity and efficiency have become legendary. We will be working through them to assure that these families and their children will not go hungry.

I have been guaranteed that every penny of our donations will go directly to the 30,000 families, without any money being taken off for administrative or other expenses. This will be audited and verified. In addition, all applicants will be vetted to assure that they are in genuine need. Mr. Cohen has given us a list of 30,000 families with five or more children whose child support has been reduced by $2,000 a year. The list has four points:

Teudat Zehut (the Israeli equivalent of our Social Security number)

They are ready and able to implement this assistance immediately. With our help, none of these children will go to bed hungry.

This week a special IRS tax-exempt organization was established solely for this fund. The name of the organization is Am Yisroel Fund — “Ma’Aynei Hayeshua;” tax exempt # 37-6420351. This fund will recruit a board of governors from Jewish communities throughout the Diaspora — from the East Coast to the West Coast, from Brazil to Canada, France, England, Australia and South Africa. The governors will elect a board of trustees which will implement best practice governances. The board of trustees will select an audit committee which will engage professional people to insure transparency and non-conflict of interests.

On Simchas Torah, I was talking about these issues to the major fundraiser of the largest yeshivah in Yerushalayim. He told me his Rosh Yeshivah was against complaining about the Israeli government, because “the government did give so much money in the past.” The fact is that they no longer have the zechus (merit) — and we do. Let each of us adopt a family in the pristine fashion of mattan b’seiser. Let this new undertaking become a resounding kiddush Hashem of the highest order in which all segments of Klal Yisrael are involved.

We seek responsible individuals to join our board of governors so that our trustees can be selected. The trustees will serve for six-year terms with two trustees being replaced each year. Proper governance is of the utmost importance to assure transparency so that the public can trace all donations and fund stipends.

Speed is of the essence. Children are going hungry. Parents feel helpless. We have the resources to prevent them from going over the brink, Rachmana litzlan. We dare not delay.

All queries and comments should be emailed to  comments@hamodia.com

All checks can be made out to Am Yisroel Fund — Ma’Aynei Hayeshua c/o Judah Septimus, Esq., CPA

This article appeared in print on page 35 of the October 9th, 2013 edition of Hamodia.