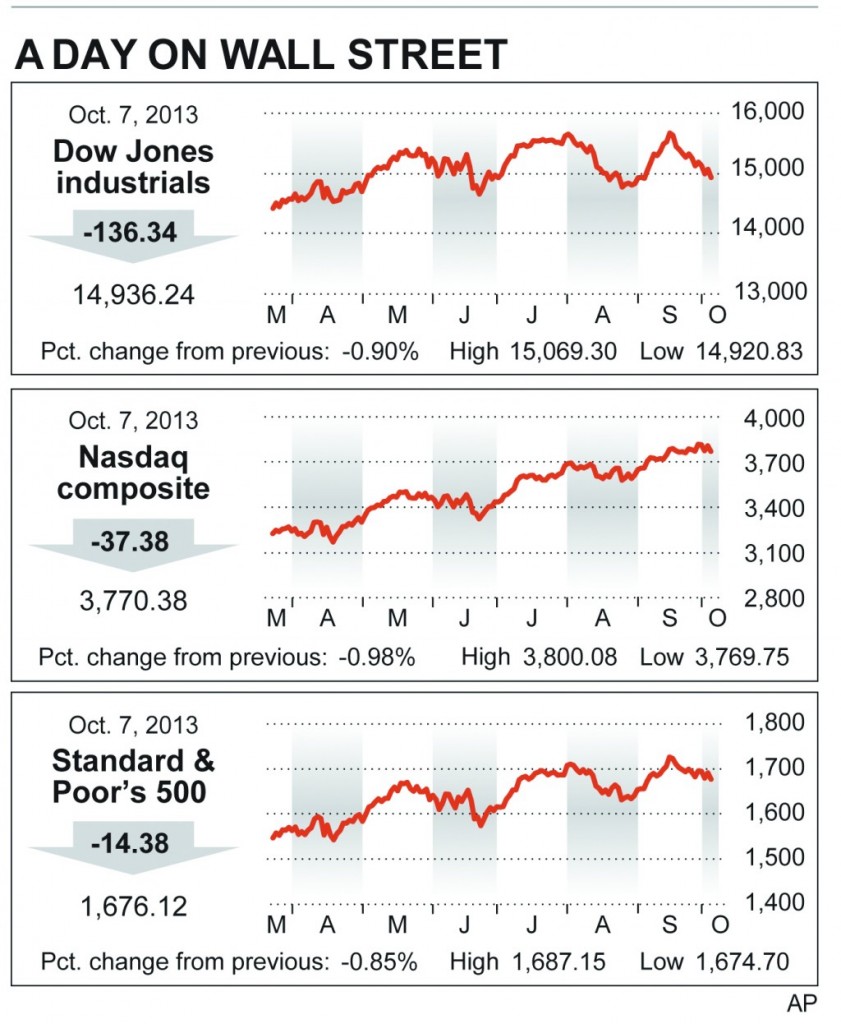 Investors sent the Standard & Poor’s 500 index to its lowest close in a month Monday as few signs emerged of a deal to end the U.S. government shutdown and raise the nation’s borrowing limit.

Senate Democrats moved to introduce legislation to raise the nation’s debt limit without the unrelated conditions Republicans have said they are seeking. The White House signaled it would accept even a brief extension in borrowing authority to prevent an unprecedented default by the United States.

Lawmakers have until Oct. 17 to reach a deal on increasing the nation’s debt ceiling. Failure to strike a deal could cause the United States to miss payments on its debt. The Treasury warned last week that a default could push the economy into a downturn even worse than the Great Recession.

The losses were broad. Nine of the 10 industry groups in the S&P 500 dropped. Phone companies were the only sector to advance.

Until now, the stock market has mostly moved sideways since the shutdown began at the start of the month, indicating that investors still expect lawmakers to come up with a deal. The S&P 500 is down 0.3 percent in October.

In government bond trading, the yield on the 10-year Treasury note fell to 2.63 percent from 2.65 percent. The yield has fallen close to its lowest in two months. Investors have bought Treasurys on concern that U.S. economic growth will slow as the budget impasse drags on.

There were also other signs that investors are getting gradually more nervous about the debt ceiling deadline.

The VIX index, which rises when investors are getting more concerned about stock fluctuations, rose to its highest in more than three months.

The dollar fell against the euro and the Japanese yen. The dollar index, which measures the strength of the dollar against other currencies, fell for the seventh day in nine. The gauge is close to its lowest since February.

One of the reasons stocks haven’t fallen more is that some investors see the current stall as a blip rather than a change in the long-term trend. The Federal Reserve continues to keep up its unprecedented stimulus of the economy, a strategy that has helped support a four-year surge in stocks.

The stock market climbed to record levels in September after the Fed said it would keep buying $85 billion of bonds a month to support the U.S. economy. Many investors had expected the central bank to start reducing its stimulus.

Minutes from the September meeting will be published Wednesday, giving investors insight into the central bank’s thinking.

“We would encourage investors with a long-time horizon to think of this as a buying opportunity,” said Kristina Hooper, U.S. Head of Investment and Client Strategies at Allianz Global Investors. Many investors, who bought bonds after the financial crisis and the Great Recession, still hold too many bonds in their investment portfolios, she said.

Investors will also be keeping an eye on earnings reports. Companies start releasing financial results for the third quarter this week. S&P 500 companies are projected to report slowing earnings growth for the fourth straight quarter, according to data from S&P Capital IQ.

The data provider predicts that earnings in the July-through-September period rose 3.1 percent, compared with growth of 4.9 percent in the previous quarter.