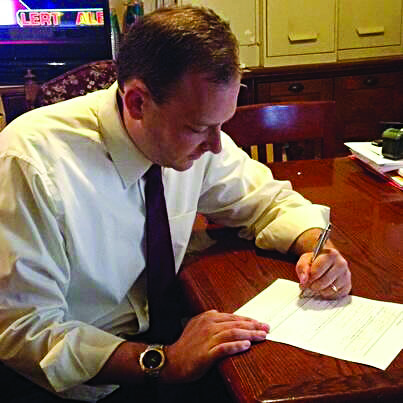 A Republican state senator from eastern Long Island said Monday he is running for Congress next year against Democratic incumbent Timothy Bishop.

Lee Zeldin, a two-term Jewish senator, major in the U.S. Army Reserves and an Iraq war veteran, said that “the best way to end the dysfunction is to change the people we send there.”

“Aren’t you tired of the way Washington is failing to represent us?” Zeldin asks in an introductory video. “I’m running for Congress because it’s time for new leadership, a louder voice and a fresh perspective.”

Bishop, who won the last two elections with cliffhanger victories, said that he “didn’t expect to run unopposed.”

Zeldin’s Senate district covers about half of the congressional district.

George Demos, who lost a GOP primary three years ago, has also just declared his candidacy. But the state party reacted much more enthusiastically to Zeldin’s announcement, trumpeting his announcement in a press release.

John Jay LaValle, Suffolk Republican chairman, called him an “ideal candidate” and said Bishop for the first time will face an elected official and not someone unknown to the public. “This is going to shape up to be the most closely watched race in the country,” he said.

If he wins, the GOP’s tenuous hold on the Senate majority, and leadership, may be imperiled. Republicans share the majority with a four-member Democratic breakaway caucus.