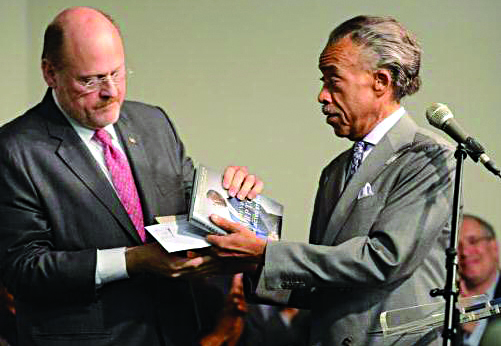 A look at the latest poll released Friday show that voters agree with Republican mayoral candidate Joe Lhota on wanting to keep Police Commissioner Raymond Kelly on the job and continue the stop-and-frisk tactic. Yet, the 68 to 19 percent margin of support goes to Democrat Bill de Blasio, a 50 point margin similar to a Quinnipiac poll out the day before.

De Blasio, who most vociferously opposed Kelly and the controversial police method in the primaries, appears unstoppable in the NYT/Siena poll. His lead cuts across every category: he led among voters regardless of age, race, gender, and income and education level.

But several snippets give Lhota the benefit of the doubt for not throwing in the towel.

More than 40 percent of likely voters, for one, say they do not know enough about Lhota to form an opinion, a much larger number than the 25 percent who say the same about de Blasio.

Lhota’s strategy of countering this extraordinarily harsh atmosphere is by emphasizing the similarities he shares with de Blasio, such as in social issues and moral values, while homing in on the values that separate them — cutting taxes.

The NYT poll, however, shows that many voters like de Blasio specifically for his tax hike proposal. Voters said that rather than focusing on cutting taxes, they want the next mayor to prioritize reducing the gap between rich and poor, a task embraced by de Blasio with his rhetoric of a “tale of two New Yorks.”

New Yorkers, the poll finds, trust de Blasio more on issues from education to jobs and the economy. One surprise is the nearly two to one lead the Democrat has on the question over who would do a better job protecting the city from crime or a terrorist attack. Lhota is staking his campaign on his position as a deputy mayor under Rudy Giuliani, and his leadership during the Sept. 11, 2001 attacks.

“[Lhota]’s got a lot of problems, let’s face it,” said Donald Levy, director of the Siena Research Institute. “It’s time for him to pull out whatever he thinks is his best stuff at this point: his biography, his toughness, his ability to respond to disasters, his ability to keep New Yorkers safe from a terrorist attack and make difficult decisions.”

One issue for Lhota to make himself heard is on education. Voters favored creating more charter schools, which are publicly funded but privately run. A study released last week shows that charter schools cost the city more than $3,000 less per student than regular public schools. Lhota supports them but de Blasio has proposed charging charter schools rent when they congregate in public schools.

On Sunday, Lhota blasted “Hypocrite Bill” for opposing charter schools while himself having attended a “quasi-independent” high school which operated outside the regular public school system. His children, Lhota charged, also attend a “specialized public school.”

“The real tale of two cities is the one Bill de Blasio wants for himself and his powerful friends and the one where everyday New Yorkers are struggling under his harmful policies,” Lhota said. “His war on charter schools is carrying the water of the unions at the expense of our children’s future.”

David Chen, the NYT reporter who analyzed the poll results, said that while things look bleak for Lhota, the small print in the poll shows “some reasons for Mr. Lhota to keep his chin up and for Mr. de Blasio to guard against complacency. The only thing that is certain, for now, is that the election will be held on Nov. 5, and that the race will intensify in the days to come.”

Democrat Bill de Blasio on Friday entered what he last year called the “lion’s den,” outlining at a conference for New York City’s business leaders his plan to raise taxes on the wealthy and enforce paid sick leave, both issues strongly opposed by the hosting Association for a Better New York.

De Blasio surprised the group by praising Mayor Michael Bloomberg and by pronouncing himself a “fiscal conservative” — a pronouncement he retracted the next day at a birthday reception for black civil rights activist Al Sharpton.

De Blasio’s remark spawned a series of mocking releases from Lhota’s camp, who welcomed reporters to “another episode of … Pandering Bill. He’ll say anything to anyone to get elected. … Cue the laugh track.”

“I have to absorb this for a second,” Lhota said when told of de Blasio’s claim. “He is not a fiscal conservative. No matter how many times he says it or tries to say it again, it’s just not true.”

De Blasio later retracted his remark, saying his “progressive” plan “begins with balancing the budget.” By law, the city is required to balance its budget and does so each year.

De Blasio’s ascension has created a sense of nervousness within some corners of the business community, which prospered during Bloomberg’s 12-year reign and is fearful of more liberal policies emanating from City Hall.

“I’m depressed at the thought that someone else will be mayor,” Shaun Osher, a real estate brokerage president, told the New York Post. “I wish we could change term limits again.”

“Look. I know not everyone in this room agrees with every part of my plan,” de Blasio said. “Today let’s go forth together and resolve that the tale of two cities will be in our past and that building one city will be our future.”

Lhota is expected to receive a much warmer reception when he addresses the same business group on Tuesday. But de Blasio’s welcome was more cordial than the one he got last year, when the mayoral aspirant was polling in the single digits, with a plan to tax the rich, and rhetoric placing the group firmly in a different orbit than his target constituency.

Now the Democratic nominee with a huge lead in the polls, the crowd that packed a Times Square hotel ballroom greeted him with a standing ovation.

“We all benefit when the middle class is growing and more of our fellow citizens are lifted out of poverty,” de Blasio said. “Over the course of this past year, our case has only grown stronger.”

Both mayoral rivals addressed a standing-room-only birthday party for controversial Rev. Al Sharpton on Friday at the House of Justice, where de Blasio was greeted with roaring applause.

“The voices that speak so passionately about addressing inequality head-on are in fact the greatest patriots in our nation, and none greater than Rev. Sharpton,” de Blasio said.

Lhota, whose old boss Rudy Giuliani had an icy relationship with Sharpton, also received a warm response, both from the audience and from Sharpton.

Sharpton, who many Jews consider responsible for stirring up the Crown Heights riots in 1991 which ended in the murder of Yankel Rosenbaum, Hy”d, today is a leader in the African-American community, host of a national political show and a close confidant of President Barack Obama.

He joked about the fact that he and Lhota were born the same year, just 96 hours apart.

“You can tell looking at us the difference that can happen in a short span of time,” Sharpton said, zeroing in on Lhota’s balding head. “I’m talkin’ about his hairstyle and my hairstyle.”

In his remarks, Lhota promised to listen to all communities. Sharpton thanked him for showing up.

“He knows it is unlikely I’m going to endorse him,” Sharpton said. “But it is also unlikely that we can move in this country if we all are not talking and at least understanding where we agree and disagree.”

James is almost certain to be the first African-American woman to hold citywide office since the Republicans are not fielding a candidate in the general election. James and de Blasio showed a united front Saturday, but the public advocate post, designed to be a thorn in the mayor’s side, may drive them apart in the likely scenario that both are elected.

De Blasio’s huge polling advantage is carrying over to fundraising as well, though not by the same 70-20 margin.

The Democrat collected $635,000 in campaign contributions during the last two weeks of September, a sizable fundraising haul for such a short period of time. Republican Joe Lhota raised $280,000 over the same period. The report leaves de Blasio with about $1.6 million in the bank, compared with Lhota’s $788,000.

The filing shows the cash flow is directly affected by poll numbers. In the week before the first poll, showing de Blasio’s blowout lead, came out on Sept. 16, both candidates raised roughly the same amount, $156,000 for de Blasio and $153,000 for Lhota. That changed after the first public polls found de Blasio with a staggering 40-point lead.

“Race to City Hall 2013” is a daily Hamodia column focusing on the New York City mayoral race, ahead of the general election on Nov. 5. It is culled from reports from AP, Politicker, NY Post, NY Times, Daily News, City & State, Capital New York and others.