No Movement in Budget Standoff, Some Hints at an End

Neither side in the standoff over the federal budget showed signs of movement Sunday as the shutdown of government agencies moved toward its second week, although both hinted at some aspects of what a potential deal eventually could look like.

Republicans and Democrats have deadlocked over two related issues — funds to keep government agencies running and the need by Oct. 17 to raise the limit on the government’s ability to borrow money.

The shutdown of government agencies, which began Oct. 1, has so far had limited impact on the economy, but economists have warned that the damage will mount as the closures drag on. This week, the shutdown is expected to begin hitting mortgage markets, for example. Real estate industry officials have said that home buyers could start seeing delays or loan cancellations because the IRS and other government agencies cannot respond to requests for documentation and other paperwork needed to close on loans.

Whatever the impact, however, the shutdown seems unlikely to end for at least several more days — and quite likely another week — as Congress and the White House try to resolve the separate standoff over the government’s borrowing limit. That deadline has far more severe consequences. If Congress does not vote to increase the debt ceiling, the government could quickly be unable to pay its debts. Most economists and business leaders say such a default could trigger another financial crisis. 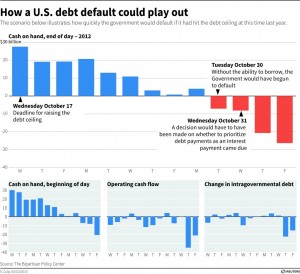 In interviews on the Sunday morning talk shows, both sides stuck to talking points that they have carefully honed over the past several days: Republicans said they tried to entice President Barack Obama into negotiations, similar to those that took place in 2011, over what he would give them in exchange for ending the shutdown and raising the debt ceiling. Democrats insisted that the GOP tactic, which they liken to hostage-taking, is illegitimate and that the House must allow government agencies to reopen and pass a debt ceiling increase before serious negotiations can begin.

Currently, “the path we’re on” leads to a default on the government’s debts, House Speaker John A. Boehner (R-Ohio), told  ABC.

Although some conservative Republicans have downplayed the impact of a default, Boehner told interviewer George Stephanopoulos that he agreed a default could cause an economic crisis worse than that of 2008.

Boehner sought to lay the blame for the deadlock on Obama. “The American people expect in Washington, when we have a crisis like this, that the leaders will sit down and have a conversation,” he said. “I told my members the other day, there may be a back room somewhere, but there’s nobody in it.”

On the Democratic side, Treasury Secretary Jack Lew, appearing on several shows, repeated the administration’s position that the precedent set in 2011, of one side being willing to risk a government default to win a policy argument, was “a very dangerous turn in the political debate” that the White House is determined not to repeat.

“Congress needs to do its job. They need to open the government; they need to make us so we can pay our bills. And then we need to negotiate,” Lew said on CNN.

The Republican position is “dangerous” and “reckless,” Lew said.

For now, each side is testing the other’s resolve and also trying to gauge public reaction. In addition, Boehner has the difficult task of finding a solution that doesn’t widen an already-deep split within Republican ranks between the tea party-driven faction that pushed the party into the current standoff and less fervent members who fear the consequences.

In the ABC interview, Boehner hinted at one step that some other Republicans have said is likely — an end, for now, to the party’s demands for changes in Obama’s healthcare law. Boehner conceded on the program that he had not wanted to make Obamacare the focus of the spending debate, but had been dragged into the fight by the party’s tea party wing.

“I’m not going to raise the debt limit without a serious conversation about dealing with problems that are driving the debt up. It would be irresponsible of me to do this,” he said. In detailing those problems, he skipped any mention of the health law, focusing instead, on Medicare and Social Security, the programs that he had sought to cut back on during previous, unsuccessful “grand bargain” negotiations.

“Let’s look at what’s driving the problem — 10,000 baby-boomers like me retiring, every single day. 70,000 this week. 3.5 million this year. And it’s not like there’s money in Social Security or Medicare,” he said. “We know these programs are important to tens of millions of Americans. But if we don’t address the underlying problems, they are not sustainable.”

In the budget he offered to Congress this year, Obama suggested trims in both programs that he would accept, but only in exchange for ending some tax preferences for upper-income Americans that the White House calls loopholes. Republicans have refused to accept any new tax increases.

Whether that set of issues provides an easier path for compromise remains unclear. Previous negotiations on those issues have gone nowhere. But, as Sen. John Cornyn (R-Texas), noted on CBS, although neither side has moved so far, once talks start, “things can move quickly.”

This article appeared in print on page 1 of the October 7th, 2013 edition of Hamodia.