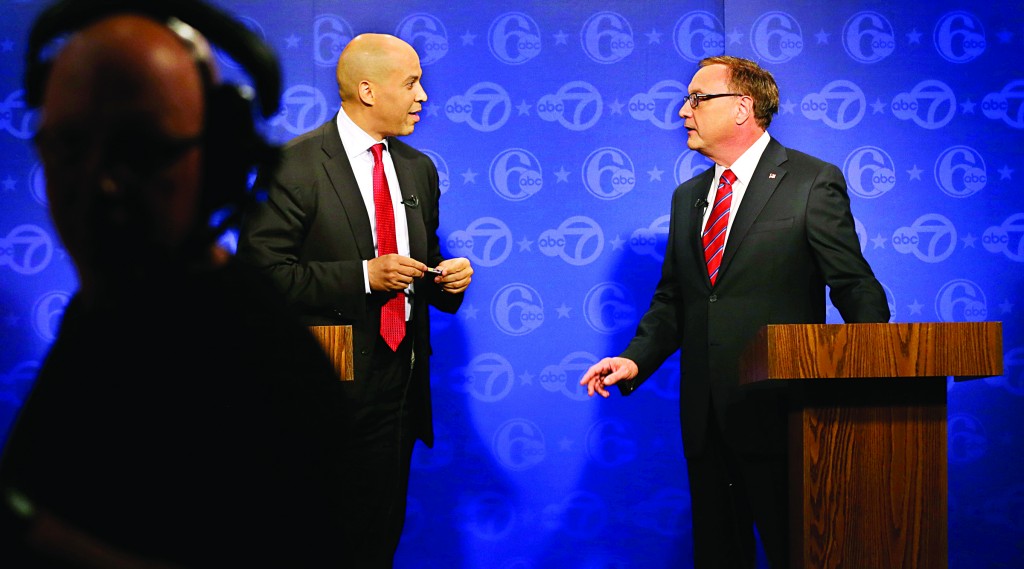 In the first face-to-face showdown of their U.S. Senate campaign, Democrat Cory Booker repeatedly characterized his opponent’s positions as “tea party-extremism,” while Republican Steve Lonegan frequently referred to Booker as a “left-wing liberal” and protegé of President Barack Obama.

The two attacked each other’s positions on issues ranging from the government shutdown to morality in a lively one-hour debate ahead of the Oct. 16 special election.

“New Jersey needs a leader, not a tweeter,” Lonegan, 57, said, a reference to Booker’s prolific use of social media. Booker, 44, invoked Lonegan’s association with what he called the “tea party fringe” throughout the debate, a group he blamed for “hijacking” the federal government over Obamacare implementation.

“If you listen to his rhetoric, it seems obvious that if he goes down to Washington, he’ll make what’s wrong with Washington worse,” said Booker, mayor of Newark, the state’s largest city.

Gov. Chris Christie endorsed fellow Republican Lonegan, but it was Booker who dropped the governor’s name when asked who he’s compromised with politically.

Lonegan questioned how Booker’s former law firm, which has paid him $700,000 since he became mayor, won $2 million worth of work with the city’s housing authority and watershed.

“Mayor, you’ve made your entire fortune as mayor of Newark,” Lonegan said. “The only example of economic growth in the city of Newark is you lining your pockets.”

Booker said the payments were compensation for his stake in a law firm he helped create.