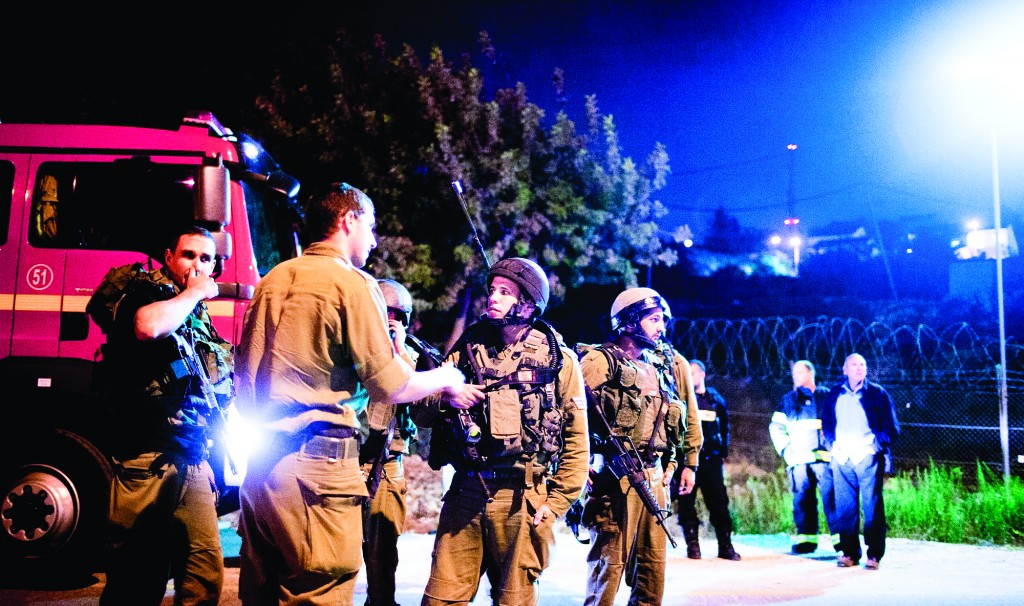 A nine-year-old Israeli girl was shot and wounded in the neck on Motzoei Shabbos in the community of Psagot, near Ramallah, in what appeared to be a Palestinian terrorist attack.

At the start of the weekly cabinet meeting on Sunday, Prime Minister Binyamin Netanyahu condemned the incident as “a heinous attack,” and pointed an accusing finger at the Palestinian Authority.

“I must say that the Palestinian Authority cannot shirk its responsibility for these kinds of incidents as long as incitement there continues,” the prime minister said. “The murderers must understand that this won’t help them.”

Israel Glick, father of the girl who was wounded, recounted the horrifying experience in an interview with Army Radio:

“We went outside and found Noam standing and she told me ‘father there’s an Arab here.’ I realized that this was a security incident and a nightmare, this is the scariest thing that could happen to a family, that a terrorist wants to break inside our home, then I pulled Noam into the house. Noam surprised the terrorist and actually scared him so that instead of entering our house — he shot her.”

The girl, shot in the upper part of her body, was rushed to the Shaare Zedek Medical Center for treatment.

Shlomo Petroburg, who heads Magen David Adom’s Yerushalayim District, resides in Psagot and arrived with an ambulance at the scene of the shooting. Petroberg said he realized his neighbor had been shot and rushed to provide emergency aid.

“I sat her down and began providing her with medical attention. She was fully conscious and I could communicate with her. Within a short period of time a Magen David Adom ambulance crew arrived and evacuated her,” Petroberg said.

A second paramedic on the scene, Yoni Hacohen, said the girl was frightened and in pain. “She spoke to us on the way the whole time. She was a real hero and we told her so,” he said.

The IDF found a hole in the perimeter fence of Psagot which they believe the gunman used to escape through, they told The Jerusalem Post on Sunday morning.

The shooting was not an isolated incident.

“This past year has been the quietest in over a decade, but lately we have noticed an increase in the number of terrorist attacks,” Netanyahu said.

“The events of the past month may lead to an escalation in Yehudah and Shomron,” former IDF Central Command chief Gadi Shamni Shamni told Army Radio. “It’s very difficult to determine if this is the start of an intifada,” he continued.

“However, we have here the evidence of three separate events. We need to look at them. They may not be related to each other, but I have no doubt that once events such as these occur, this can encourage all sorts of people who might not have acted, to act.”

Shamni was referring to the kidnapping and killing of soldier Tomer Hazan by a Palestinian co-worker recently and the shooting of Givati infantry soldier Gavriel Kobi in Chevron, both of which occurred three weeks ago, and this latest attack in Psagot.

“This is a result of the Palestinian Authority’s system of incitement and two-faced policy. On the one hand, they say they want peace, and on the other hand they incite against Israel.”

Minister of Energy and Water Silvan Shalom (Likud) told Israel Radio on Sunday that more attacks like this could result in cancellation of the agreement to release 104 Palestinian terrorists from Israeli jails.

“The ministerial committee is not a rubber stamp committee, and it has the power to rescind the release of more prisoners,” Shalom said.

Construction and Housing Minister Uri Ariel (Jewish Home) vowed on Sunday, in an interview with Arutz Sheva, that in response, his ministry will strengthen and expand the community.