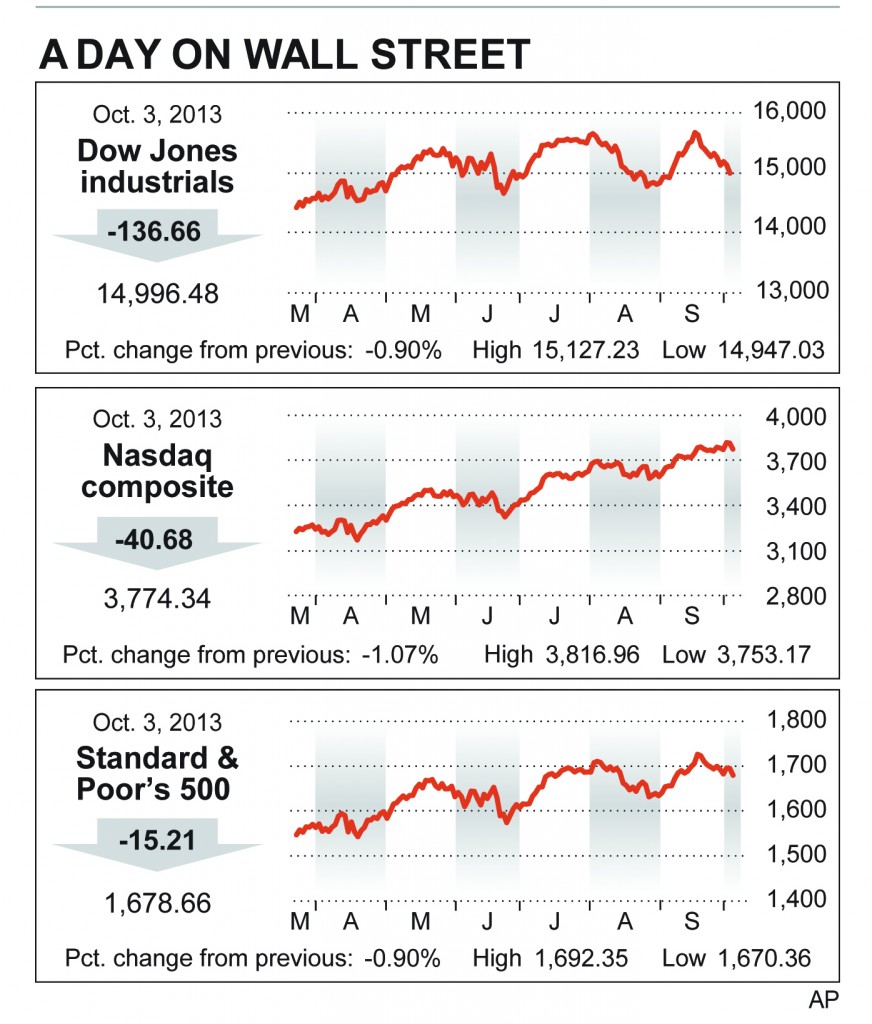 Investors sold stocks across the board Thursday as a U.S. government shutdown dragged into a third day and the U.S. inched toward a deadline on raising the nation’s borrowing limit.

The Dow Jones industrial average fell close to 200 points by late morning as Republicans and Democrats appeared no closer to ending the budget impasse. In speech President Barack Obama said there was only one way out of the shutdown: “Congress has to pass a budget that funds our government with no partisan strings attached.”

Investors also got some disappointing economic news on Thursday.

The stock market losses on Thursday marked an acceleration of gradual declines over the last two weeks. Stocks have fallen eight of the last 10 days as investors anticipated that negotiations over the federal budget would fail. If the shutdown persists, the weak economic recovery could falter.

Republicans in the House of Representatives, pushed by a core of tea party conservatives, are insisting that Obama accept changes to the health care law he pushed through three years ago as part of a budget bill. Obama refuses to consider any deal linking the health care law to routine legislation needed to extend government funding.

The U.S. Treasury Department said Thursday that the economy could plunge into a downturn worse than the Great Recession if Congress failed to raise the debt ceiling and the country defaulted on its debt obligations.

The U.S. missing a debt payment could cause credit markets to freeze, the value of the dollar to plummet and U.S. interest rates to skyrocket, according to the Treasury report.

A default “would be so catastrophic and such a self-inflicted wound that you can’t imagine we would let it happen,” said Maury Fertig, chief investment officer of Relative Value Partners. “But the fact is that every day we get closer to it the possibility increases, even though it’s remote.”

Stocks pared some of their losses in afternoon trading after The New York Times reported that the Republican House Speaker John Boehner had told his party that wouldn’t let the nation default.

Lawmakers must periodically raise the nation’s borrowing limit to keep U.S. funds flowing, but the once-routine matter has become a bargaining chip in battles over the federal budget deficit. Failure to raise the limit could cause the U.S. to miss payments on its debt.

Stocks also dipped briefly in afternoon trading on news that shots had been fired at the Capitol.

Defense companies, which rely on government contracts for much of their revenue, fell. Lockheed Martin dropped $2.25, or 1.8 percent, to $122.80. The stock has fallen 5.4 percent in the last five trading days.

Despite the slump during the last two weeks, stocks are still close to the record levels they reached last month. The S&P 500 is up 17 percent so far this year, having climbed as much as 21 percent by Sept. 18.

A four-year bull-market for stocks has been sustained by a recovery in the housing market, improving hiring and
resilient corporate earnings. Unprecedented economic stimulus from the Federal Reserve has also supported the market.

Some analysts said that investors should take advantage of any decline further price declines and add to their holdings of stocks.

“While the chances are not zero, the probability of the debt ceiling not being raised and the probability of the U.S. defaulting are about as close to zero as you can possibly get,” said Scott Wren, a senior equity strategist at Wells Fargo Advisors. “I hope the market takes the bait and we get more of a sell-off here, it’s just an opportunity.”

The dollar dropped against the euro and the Japanese yen, continuing a recent slide. The dollar index, which measures the U.S. currency against a group of other major currencies, has declined for five days.

The Labor Department said Thursday it will not release the highly anticipated September jobs report on Friday because the government remains partly shut down.

In government bond trading, the yield on the 10-year Treasury note fell to 2.61 percent from 2.62 percent Wednesday.

— Tesla Motors fell $7.64, or 4.2 percent, to $173.31 after the electric car company had a rare downgrade from a financial analyst and on news of a fire involving one of its cars.