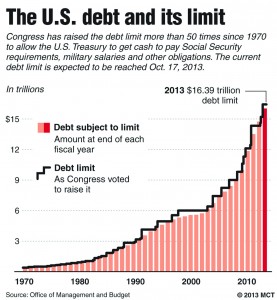 Efforts to resolve the government shutdown were at a standstill Thursday as President Barack Obama and House Speaker John Boehner traded barbs and the Treasury warned of a dire risk to the economy ahead if politicians don’t act. At one point, debate in the Capitol was stopped because of a police chase and gunfire on a street nearby.

As the shutdown dragged into its third day, worries deepened that it would escalate into a damaging political stalemate over the nation’s borrowing authority. The Treasury Department warned on Thursday that a deadlock over raising the nation’s debt limit could touch off a new recession even worse than the last one, from which Americans are still recovering.

And the showdown grew more personal as Obama singled out Boehner for criticism.

Speaking at a construction company in Washington’s Maryland suburbs, Obama cast the House speaker as a captive of a small band of conservative Republicans who want to extract concessions in exchange for passing a short-term spending bill that would restart the partially shuttered government.

“The only thing preventing people from going back to work, and basic research starting back up and farmers and small business owners getting their loans, the only thing that is preventing all that from happening right now, today, in the next five minutes is that Speaker John Boehner won’t even let the bill get a yes or no vote because he doesn’t want to anger the extremists in his party,” Obama said.

Boehner answered by batting blame back toward Obama and his “my-way-or-the-highway approach.” Boehner said that if the president would negotiate to fix flaws in “Obamacare,” the shutdown could end.

“The president’s insistence on steamrolling ahead with this flawed program is irresponsible,” said Boehner (R-Ohio).

The House was taking up shutdown bills Thursday afternoon when lawmakers were forced into a lockdown after police chased a car along a street near the Capitol. A woman driving a black Infiniti with a young child inside tried to ram through a White House barricade Thursday, then led police on a chase toward the Capitol, where police shot and killed her, witnesses and officials said. Police described it as an isolated event and saw no indications of terrorism.

Lawmakers resumed their work about an hour after the Capitol complex was locked down.

Majority Leader Eric Cantor said the House was pursuing separate bills to remedy “situations that are in critical stages” because of the partial government shutdown that began Tuesday.

The first, to provide pay for National Guard and Reserve troops, passed 265-160, before the House session was interrupted.

House leaders also planned a vote on restoring money to veterans programs, and officials said legislation to help Head Start and possibly the Women, Infants and Children, or WIC, program could soon be drafted as well.

Senate Democrats made clear they will not agree to reopen the government on a piecemeal basis. “You can’t fall for that legislative blackmail or it will get worse and worse and worse,” said Sen. Chuck Schumer of New York.

Senate Democrats and Obama said the House must send them a measure that would restart all of government with no strings attached.

“Take a vote,” Obama urged Boehner in his speech. “Stop this farce and end this shutdown right now.”

It might not be so simple, however. Moderate Republicans have said they think they could provide enough votes to join with minority Democrats and push a bill through the House reopening the government with no restrictions on the health care law.

But under pressure from House GOP leaders, they failed to join Democratic efforts on Wednesday aimed at forcing the chamber to consider such legislation.

In the Senate, GOP Leader Mitch McConnell of Kentucky said the problem was “Democrats’ refusal to apply simple fairness when it comes to Obamacare.”

Democratic and Republican leaders in the Senate blocked each other’s proposals for addressing the stalemate Thursday. Democrats rejected GOP proposals to reopen the national parks, speed up processing of veterans’ claims and restart some medical research that’s been put on hold. Republicans stymied a Democratic plan to bring the entire government back to work.

Republicans who initially sought to defund the health care law in exchange for funding the rest of government have scaled back their demand but say they need some sort of offer from Obama.

A meeting between Obama and congressional leaders at the White House Wednesday evening offered no glimmer of progress.

“All we’re asking for here is a discussion and fairness for the American people under Obamacare,” Boehner said after the meeting.

The White House said Obama would be happy to talk about health care — but only after Congress moves to reopen the government.

If the shutdown dispute persists it could become entangled with the even more consequential battle over the debt limit. The Obama administration has said Congress must renew the government’s authority to borrow money by Oct. 17 or risk a first-ever federal default, which many economists say would dangerously jangle the world economy.

Treasury’s report Thursday said defaulting on the nation’s debts could cause the nation’s credit markets to freeze, the value of the dollar to plummet and U.S. interest rates to skyrocket.

This article appeared in print on page 1 of the October 4th, 2013 edition of Hamodia.