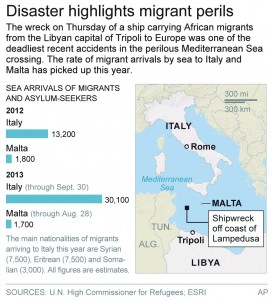 The rickety fishing boat was the third of the night to head toward the tiny Italian island of Lampedusa, overloaded with African migrants seeking a better life in Europe. Most never reached shore.

After the boat started taking on water, someone on board set a fire to get the attention of passing ships. The flames spread, and panicked passengers surged to one side to avoid the fire. The vessel capsized; hundreds of men, women and children who didn’t know how to swim were flung into the Mediterranean Sea.

At least 114 died and some 200 were still unaccounted for late Thursday, Italian officials said.

It was one of the deadliest accidents in the perilous crossing thousands make each year seeking a new life in the prosperous European Union. Smugglers charge thousands of dollars a head for the journey aboard overcrowded, barely seaworthy boats that lack life vests.

Lampedusa, 70 miles off Tunisia and closer to Africa than the Italian mainland, has been at the center of wave after wave of illegal immigration.

Between 450 and 500 were believed to be on board; the ship set sail from the Libyan capital, Tripoli, and capsized about a half-mile from Lampedusa. Health commissioner Antonio Candela said only 159 were rescued.

Bartolo initially put the death toll at 94 but said it would certainly rise as search operations continued. The deaths of so many may have come down to the lack of a cellphone.

Migrants who arrive in Lampedusa are processed in centers, screened for asylum and often sent back home. Some slip into the general public and make their way to northern Europe, seeking to blend into larger immigrant communities. In Italy, migrants can work legally only if they have a work permit and a contract before they arrive — a policy pushed through by Italy’s anti-immigrant Northern League party.

Thursday’s disaster was the second shipwreck this week off Italy. On Monday, 13 men drowned while trying to reach southern Sicily, when their ship ran aground just a few yards from shore.

A host of Italian officials demanded the 28-nation European Union do more to combat smuggling operations and help countries like Italy cope.

“Let us hope that the European Union realizes this isn’t an Italian problem but a European one,” Alfano said as he headed to Lampedusa to oversee the recovery operation.

Hundreds of migrants reach Italy’s shores every day, particularly during the summer, when seas are usually calmer. According to the U.N. refugee agency, 8,400 migrants landed in Italy and Malta in the first six months of this year, almost double the 4,500 who arrived during the first half of 2012. The numbers have spiked in recent weeks, particularly from Syria.

Still, that is a far cry from the tens of thousands who flooded to Italy — many through Lampedusa — during the Arab Spring of 2011.

This article appeared in print on page 2 of the October 4th, 2013 edition of Hamodia.