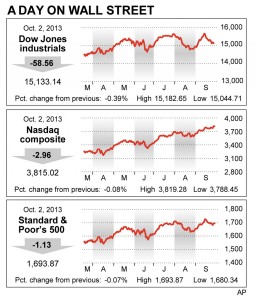 Wall Street to Washington: end the shutdown and move on.

Wall Street made it clear on that the longer the budget fight drags on, the more its bankers worry about significant damage to the economy and the possibility that Congress won’t allow the government to borrow more. The financial market sees that as a disastrous move that could send the U.S. into recession.

“I’m not going out there and beating my chest and saying the world is coming to an end here,” said Brad McMillan, the Chief Investment Officer at Commonwealth Financial, an investment adviser. “But we face the possibility for significantly greater disruptions than the market is currently pricing in.”

On Wednesday, the major indexes opened sharply lower, with U.S. lawmakers appearing unwilling to yield in their entrenched positions. After Obama summoned Congressional leaders to the White House later in the morning, the market started to recoup some of its losses, but the recovery faded throughout the afternoon.

“The markets are sending a loud message to Washington lawmakers to get their act together and resolve the budget crisis,” said Peter Cardillo, chief market economist at Rockwell Global Capital.

Earlier, European Central Bank head Mario Draghi said that the partial U.S. government shutdown was a risk to economic recoveries in the U.S. and globally.

Chief executives from the nation’s biggest financial firms met with Obama for more than an hour Wednesday. Referring to the potential showdown over raising the government’s borrowing limit, Lloyd Blankfein, CEO of Goldman Sachs, said: “We shouldn’t use threats of causing the U.S. to fail … as a cudgel.”

Treasury Secretary Jacob Lew told Congress that unless lawmakers act in time, he will run out of money to pay the nation’s bills by Oct. 17. Congress must periodically raise the limit on government borrowing to keep U.S. funds flowing, a once-routine matter that has become locked in battles over the federal budget deficit.

The last time there was an impasse over the borrowing limit, in August 2011, it led to a downgrade of the United States’ credit rating by Standard & Poor’s and a plunge in the stock market.

The government shutdown is ill-timed because the U.S. economic recovery is still on shaky foundations.

“It’s clear that the economy hasn’t picked up steam like people were anticipating,” said Kate Warne, and investment strategist at Edward Jones, an investment adviser. “Especially with the government shutdown, there’s not a lot that is going to help it do so over the next couple of months.”

About 800,000 federal workers were staying home again Wednesday on the second day of the shutdown, the first since the winter of 1995-96.

Six of 10 industry sectors in the S&P 500 fell. Declines were led by the makers of consumer staples and industrial companies.

The market for some of the world’s safest investments — U.S. government bonds — was mostly calm Wednesday.

The yield on the U.S. 10-year Treasury note, where global investors put their money when they want minimal risk, was little changed. It traded at 2.63 percent late Wednesday, compared with 2.65 percent the day before.

But there were signs of nervousness in the market for short-term U.S. debt.

Investors have been selling off one-month T-bills that mature around the time the U.S. government is expected to hit the debt ceiling.

In mid-September, the yield on a one month was between zero and 0.01 percent. On Tuesday, the yield had jumped up to 0.1 percent. The difference between 0.01 percent and 0.1 percent may seem trivial to the average American, but in the giant world of bond investing, it raises eyebrows.

Bond market watchers said the move is because portfolio managers of money market funds, those who most often buy T-bills with extremely short maturities, don’t want to be caught holding U.S. government debt that matures around the time the federal government hits the debt ceiling, and therefore cannot pay its bills.

This article appeared in print on page 8 of the October 3rd, 2013 edition of Hamodia.