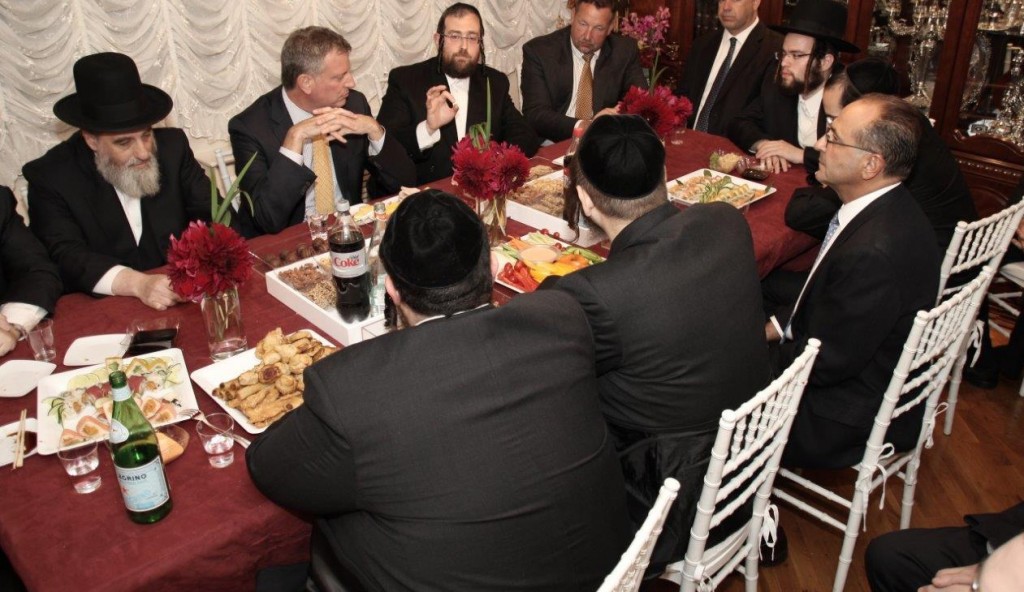 Lhota Tries to Outflank de Blasio From the Left

Republican mayoral candidate Joe Lhota is starting to refer to himself as the true “progressive” in the race, attempting to lure Democrats away from Democrat Bill de Blasio to take a look at his own experience.

De Blasio, Lhota’s campaign manager Jake Menges posted Wednesday, is “not progressive [and is] too extreme to govern. [Lhota is] progressive and ready to lead on day one.”

De Blasio’s campaign responded by trying to link Lhota to the tea party and the partial government shutdown currently in effect.

“Joe Lhota’s tea party friends have shut down the government. This includes shutting down the Statue of Liberty,” reads one message from the campaign.

Lhota responded sharply, saying, “If I’m tied to the tea party, so is Andrew Cuomo.”

The governor, who nominated Lhota to run the MTA and worked closely with him during Hurricane Sandy, called him a “professional” last month.

“What is happening in Washington is a disgrace,” Lhota said. “Leadership means putting the interest of the people you serve ahead of political gamesmanship. This has been the cornerstone of my professional career and campaign, and a stark contrast between me and Bill de Blasio. Agendas driven by extremists on either side never result in responsible governing.”

Lhota’s deputy political director Nick Iacono sent out an email to supporters Wednesday, asking them to each reach out to five registered Democrats in order to give Lhota a chance in a city where Democrats outnumber Republicans by a six-to-one ratio.

“Joe Lhota managed our city after 9/11 and he got our subway and public transit system up-and-running in less than 72 hours after Superstorm Sandy,” the email reads. “The largest thing Bill de Blasio has ever managed is his current campaign for Mayor. Bill de Blasio is NOT ready to be our mayor. Joe Lhota is.”

Joe Lhota has “top secret status” from the federal government as a result of his leadership of New York’s transit authority, the Republican mayoral candidate said Monday during a telephone town hall meeting with Democratic voters.

The special clearance came up when a caller asked about NYPD Commissioner Ray Kelly having said before the Sept. 10 primary that none of the mayoral candidates had approached him for a briefing about the city’s anti-terror activities.

“I have had the briefings. I am aware of anti-terrorism,” Lhota said. “I have a certain top secret status from the federal government, as well from my days at the MTA.”

Jessica Proud, Lhota’s campaign spokeswoman, said that Lhota needed the security clearance in order to be briefed by the federal government as part of his MTA job, and it was never taken away.

Such clearances “last a certain period of time and then [need] to be re-upped, which they would only do if you’re still in the position,” Proud said. “They don’t take it away. It’s granted for a specific amount of time. He only worked there for a year … so it may very well still be in place. He would have to check the paperwork to know for sure.”

MTA spokesman Adam Lisberg said he didn’t know the specifics of Lhota’s claim or status, but “like all high-level state officials, he had to undergo a state police background check” to lead the agency.

“Considering that transit systems have been high-profile targets around the world, it wouldn’t surprise me if he had some sort of security clearance in order to effectively manage security issues,” Lisberg said.

During the town-hall call, Lhota, a smoker, said that the city has no place deciding where and if a person could smoke.

“I don’t think the government should come in and flat-out say, especially in a building that, in your personal property or your personal space, you can’t do what you want to do,” he said.

Internal Polling Has Lonegan Creeping Up on Booker

The powerful head of the state Board of Regents deplored Bill de Blasio’s plan to charge rent to charter schools, saying she’s concerned that the added expense could stymie growth and innovation.

“Anything that you do that makes it prohibitive for charter schools to grow and thrive in New York City is not a great way to proceed,” Chancellor Merryl Tisch said. “I’m sure charter school operators are paying attention to campaign rhetoric.”

Charter schools are publicly funded but run privately. Mayor Michael Bloomberg has provided free space to most of the 183 charters, serving 70,000 students, allowing the schools to operate in city buildings alongside traditional public schools.

That has triggered a backlash from the teachers’ union and parents from regular public schools, who claim the charters are taking away needed classrooms. Most charter schools are non-union.

De Blasio has said he would charge rent to charters on a sliding scale.

“It would depend on the resources of the charter school or charter network,” de Blasio told WNYC. “Some are clearly very, very well resourced and have incredible wealthy backers. Others don’t. So my simple point was that programs that can afford to pay rent should be paying rent.”

Tisch was a campaign chairwoman for Democrat Bill Thompson’s primary bid until his loss to de Blasio last month.

De Blasio wants to raise taxes on the wealthy, but Wall Street heavyweights are donating to his mayoral campaign in large amounts.

In the second event this week, a breakfast for de Blasio on Wednesday at The Yale Club has drawn support from such top Wall Street moneymen as Evercore Chairman Roger Altman, the former deputy treasury secretary under Bill Clinton.

Orin Kramer, a top democratic fundraiser for President Obama during both his presidential campaigns who runs hedge fund Boston Provident, is another chair of the event.

Other chairs — those promising to raise at least $10,000 — include Blair Effron, the former UBS vice chairman whose new firm is Centerview Partners, and Michael Schlein of Accion International, a micro-finance lender.

Catsimatidis Spent $419 Per Vote in Primary

Billionaire magnate John Catsimatidis spent a whopping $419 per vote in last month’s Republican primary — more than double what Mayor Michael Bloomberg spent in his 2009 reelection race — only to lose to Joe Lhota, who spent a mere $119 per vote, according to the candidates’ filings so far with the Campaign Finance Board.

The other big per-vote spender was former Rep. Anthony Weiner, who laid out more than $190 a vote, or $6.5 million, in coming in fifth in the Democratic race.

In comparison, Lhota spent a total of $3.8 million, compared with Catsimatidis’s $10.4 million. Bill de Blasio captured the Democratic nomination by spending $24 a vote, or $6.8 million.

In 1989, Ronald Lauder spent about $350 a vote, losing to Rudy Giuliani in the Republican mayoral primary.