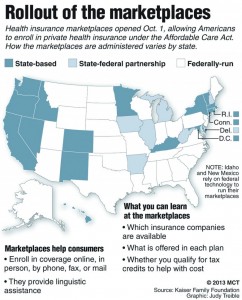 The pressure is on for the federal government and states running their own health insurance exchanges to get the systems up and running after overloaded websites and jammed phone lines frustrated consumers for a second day as they tried to sign up for coverage using the new marketplaces.

In California, home to 15 percent of the nation’s uninsured, officials pulled the enrollment portion of the Covered California site down overnight for emergency upgrades. It was restored midmorning Wednesday, and 7,770 people had started applications by then, spokesman Roy Kennedy said.

California is one of a handful of mostly Democratic states that opted to set up their own exchanges rather than let the federal government do it for them. In the 36 states being operated by the federal Department of Health and Human Services, consumer patience was still being tested.

Agency spokeswoman Joanne Peters said many Americans successfully enrolled in health insurance on the first day, but she declined to put a number on it. She said the delays were due to “overwhelming interest” and high volume.

It’s not as if nobody warned them. Just three months ago, the congressional Government Accountability Office said a smooth and timely rollout could not be guaranteed because the online system was still getting finishing touches and had not been fully tested.

The Obama administration shrugged off the evaluation.

The bumpy debut has the hallmarks of a technology project that may have rushed to meet the Oct. 1 deadline, said Bill Curtis, chief scientist at CAST, a software quality analysis firm, and director of the Consortium for IT Software Quality, which develops standards.

“When you are in a rush, you typically make a lot of mistakes and you don’t have time to test them all out,” he said.

The Obama administration hopes to sign up 7 million people during the first year and aims to eventually sign up at least half of the nearly 50 million Americans who are uninsured through an expansion of Medicaid or government-subsidized plans.

This article appeared in print on page 2 of the October 3rd, 2013 edition of Hamodia.