Israel Netanyahu to U.N.: ‘If Forced, We Will Stand Alone’
Israel 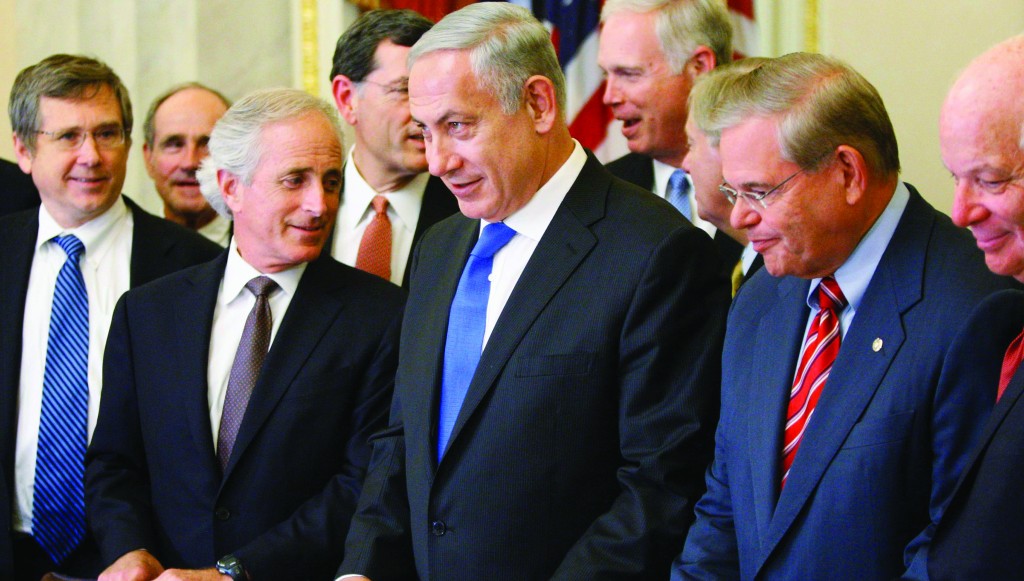 This time, Israeli Prime Minister Binyamin Netanyahu did not bring with him to the U.N. General Assembly any visual aids to show the world how much time was left in the ticking nuclear bomb in Iran.

Instead, he brought with him a blunt, unadorned speech in which he accused the Iranian Prime Minister Hassan Rouhani of perpetrating “a ruse” to calm the world while his country finishes building its bomb.

Contrasting Rouhani with his predecessor, former Iranian President Mahmoud Ahmedinejad, whom he described as “a wolf in wolf’s clothing,” Rouhani,” he said, “is a wolf in sheep’s clothing.”

Netanyahu noted that this is not the Iranian leader’s first charm offensive aimed at preserving his country’s nuclear weapons program. He cited Rouhani’s record of putting up a diplomatic façade while Iranian nuclear scientists continued their work.

He recalled that Rouhani was Iran’s chief nuclear negotiator between 2003 and 2005. “He masterminded the strategy which enabled Iran to advance its nuclear weapons program behind a smokescreen of diplomatic engagement and very soothing rhetoric.

“He thinks he can get away with it, because he did it before,” quoting from the Iranian leader’s own words about earlier negotiations over Iran’s nuclear program, boasting of how “by creating a calm environment, we were able to make progress at [the nuclear facilithy in] Isfahan.”

Referring to the compacted yellow uranium powder used in the nuclear process, Netanyahu said, “he thinks he can have his yellow cake and eat it too.”

Though he did not mention the name Munich, the speech had Munich written all over it, warning the world that the belligerent Iranian rhetoric — including threats to wipe Israel off the map — could not be disregarded or downplayed as mere “rhetoric for domestic consumption,” as some would like to do.

The “central lesson of the 20th century,” is that “when a radical regime with global ambitions gets awesome power, sooner or later its appetite for aggression knows no bounds,” he said. “The world may have forgotten this lesson, but the Jewish people have not forgotten.”

Netanyahu also drew a parallel to North Korea, which, he noted, also claimed to be developing atomic power for peaceful purposes only. He recalled that in 2005, the deal reached with Pyongyang was welcomed in the West as a peaceful solution to the problem. And like North Korea, which a year later exploded its first nuclear device, the Iranian promises will prove to be “empty promises for  sanctions release.”

But, he warned, the Iranian peril is far greater, “like 50 North Koreas.” It would enable Iran to gain a chokehold on the supply of oil from the Mideast, and would make it the first nuclear terrorist state.

The Israeli prime minister quoted President Barack Obama who said on Monday that he would settle only for “meaningful” changes in Iran before easing sanctions, and then stipulated that “the only diplomatic solution that will work is one that requires Iran to fully dismantle its nuclear program and prevent it in the future.”

Netanyahu reviewed his recently stated four points that must be met before sanctions should be lifted: that Iran cease uranium enrichment, remove to outside its borders its existing stockpiles of enriched uranium, dismantle all infrastructure for nuclear breakout capability, and stop all work at its heavy water reactor aimed at producing plutonium.

“Keep up the sanctions,” urged Netanyahu. “If they advance their program during negotiations, the west should strengthen them. And no agreement to a ‘partial deal for cosmetic concessions that would take only weeks to reverse,’ after it took so long to implement the current sanctions, which could not so easily be be put back in place.”

Paraphrasing President Ronald Reagan’s formula for dealing with Soviet arms, “trust but verify,” Netanyahu said that in the case of Iran, the watchwords must be “distrust, dismantle and verify.”

In his summing-up, Netanyahu left no doubt that Israel would act to stop Iran if the rest of the world allowed itself to be duped by false concessions.

“Israel will never allow a rogue regime that threatens to wipe it off the map to acquire nuclear weapons. It will defend itself. If forced to stand alone, we will stand alone.

“But if so, we will be defending many, many others, as well.”

Only at the end of his 33-minute address, did Netanyahu turn briefly to the talks with the Palestinians. He repeated his willingness to make “painful concessions” for peace while noting that, to date, the Palestinian leaders have demonstrated no reciprocal willingness.

He stipulated that the Palestinians must recognize the state of Israel as a Jewish state, and accept that theirs will be demilitarized, adding that he would never compromise on Israel’s security.

“The people of Israel have come home, never to be uprooted again,” he concluded.

Although the Iranian and Iraqi delegations boycotted Netanyahu’s appearance, leaving empty seats by their countries’ place cards, they were obviously listening in. Khodadad Seifi, Iran’s deputy ambassador to the U.N., later responded by calling Netanyahu’s speech inflammatory, and denying that Iran was building a nuclear arsenal.

Regarding the threat of military intervention, “the Israeli Prime Minister better not even think about attacking Iran, let alone planning for that,” The New York Times, quoted the Iranian diplomat as saying.

Meanwhile, President Shimon Peres gave a speech in the Dutch parliament on Tuesday in which he said that “a responsible coalition of peaceful countries must prevent Iran from realizing its dangerous aspirations to nuclear weapons.”

“The reality today in Iran is completely different than Rohani’s speech,” Peres added. “The development of a nuclear bomb is a proven fact, not just words. Development of long-range missiles which carry nuclear warheads continues, and it’s a danger to the whole world. No one in the world is threatening Iran’s existence,” he said.