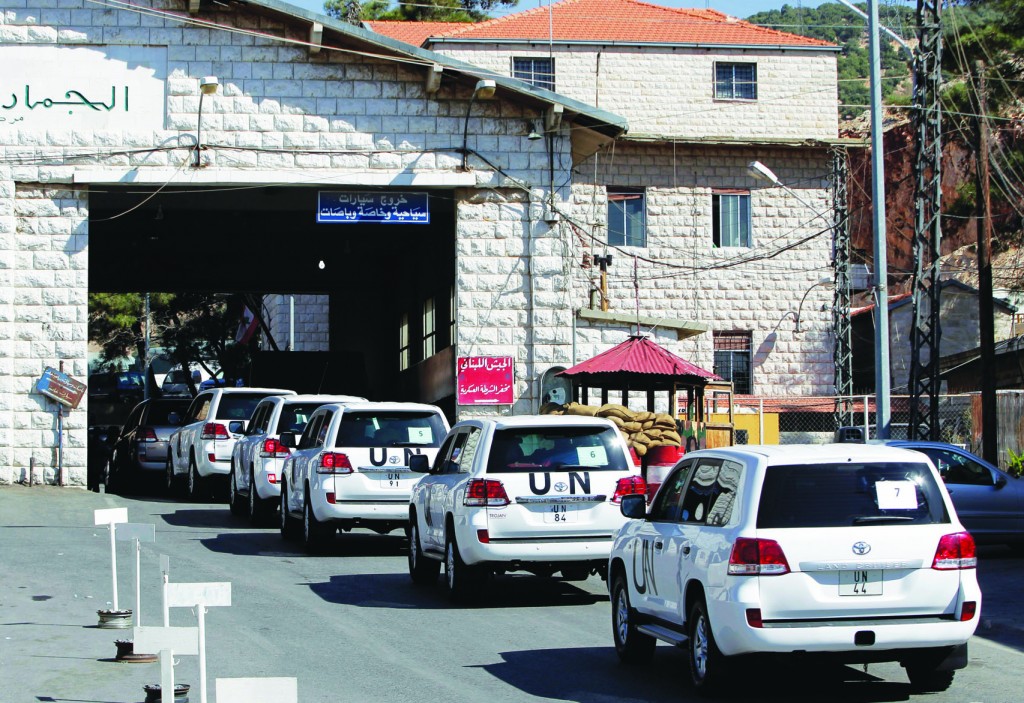 Wading into the world spotlight, international inspectors arrived in Damascus on Tuesday to begin the monumental task of overseeing the destruction of Syria’s chemical weapons in the middle of a civil war.

The inspectors from a Netherlands-based chemical weapons watchdog have around nine months to complete their mission that calls for finding, dismantling and eliminating President Bashar Assad’s estimated 1,000-ton arsenal.

Their task has been endorsed by a U.N. Security Council resolution that calls for Syria’s chemical stockpile to be scrapped by
mid-2014. The deadline is the tightest that the experts from the Organization for the Prohibition of Chemical Weapons have ever faced.

An advance team of 19 inspectors and 14 U.N. staff members arrived in Damascus late Tuesday afternoon in a 19-vehicle convoy escorted from the Lebanese border by two Syrian Foreign Ministry representatives. The experts set up a logistics base for its immediate work, the U.N. said in a statement.

Experts at The Hague, where the OPCW is based, said Sunday the inspectors’ priority is to reach the first milestone of helping Syria scrap its ability to manufacture chemical weapons by a Nov. 1 deadline, using every means possible.

The destruction mission could include smashing mixing equipment with sledgehammers, blowing up delivery missiles, driving tanks over empty shells or filling them with concrete, and running machines without lubricant so they seize up and become inoperable.

Some of the inspectors will be double-checking Syria’s initial disclosure of what weapons and chemical precursors it has and where they are located. Others will begin planning the logistics for visits to every site where chemicals or weapons are reported to be stored.

Within a week, a second group of inspectors is scheduled to arrive and form teams that will fan out to individual locations.

The inspectors’ mission was born out of a deadly chemical attack on opposition-held suburbs of Damascus on Aug. 21. The U.S. and its allies accuse the Syrian government of being responsible, while Damascus blames the rebels.

The chemical attack prompted the Obama administration to threaten punitive missile strikes against the Assad regime, touching off weeks of frantic diplomacy that ended with Friday’s U.N. resolution.

The resolution also endorsed a roadmap for political transition in Syria adopted by key nations in June 2012, and it called for an international peace conference in Geneva to be convened “as soon as possible” to implement it.

The Geneva negotiations have been repeatedly delayed for months, with neither the Syrian regime nor the opposition showing much interest in attending as long as the war remains deadlocked. Disagreements also have flared repeatedly over who should take part in the talks.

Efforts to bring the sides to the table received another blow over the weekend when Syria’s foreign minister said the government won’t talk with the main Western-backed opposition group, the Syrian National Coalition.

The rebel movement on the ground also is riven by fissures that have burst to the fore in recent months, as Islamic extremist rebel brigades associated with al-Qaida battle more mainstream rebel factions nominally linked to the Western-backed Free Syrian Army.

Also Tuesday, a Syrian activist group that tracks the conflict said more than 115,000 people have been killed in the revolt. The tally from the Britain-based Syrian Observatory for Human Rights includes around 29,000 regime troops, 18,000 pro-government militiamen, and some 23,000 rebels.

In July, the U.N. put the Syrian death toll at more than 100,000, but it has not updated its numbers since then.