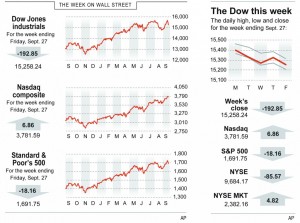 The budget fight may be happening in Washington, but it’s investors on Wall Street who keep getting smacked.

Stocks fell Friday for the sixth day out of the last seven, and ended the week with a decline. Investors focused on the risk that the government could shut down on Tuesday unless Congress agrees to a new spending bill. And even if that hurdle is cleared, the dispute is poised to continue into the middle of October as legislators debate raising the nation’s borrowing limit.

There were a lot of moving parts for investors to keep track of on Friday. The U.S. Senate approved a spending bill that is already considered dead in the House of Representatives, where Republicans want changes to President Barack Obama’s health-care law.

Stocks moved little as Obama spoke during the final minutes of trading. He reiterated a previous vow not to negotiate with Congress under the threat of a shutdown.

Still, the indexes are off only about 1 percent for the week, and the S&P 500 is just 2 percent below its record high set Sept. 18.

On Friday, a government report showed that incomes and consumer spending grew slightly last month. The increases suggest anemic growth that is not strong enough to accelerate the economic recovery.

A survey showed that consumer confidence declined this month as Americans worried about the possible government shutdown and their own finances. The survey found that half of households expect no pay increase in the coming year.

“If you keep saying things are bad, even if things are good, people are going to believe they’re bad, and they’re going to act accordingly,” he said.

Eight out of 10 industry groups in the S&P 500 index fell. Health care and consumer discretionary stocks had small gains.

J.C. Penney Co. shares slid $1.37, or 13 percent, to $9.05, after the struggling retailer said it would raise about $811 million through a stock offering. The shares fell as investors noted that the new shares are priced at $9.65, less than J.C. Penney’s closing price of $10.42 on Thursday. Also, the growing pool of shares means investors’ current stakes in the company will shrink.

Lumber Liquidators dropped $5.83, or 5 percent, to $107.13, after it disclosed that federal authorities searched its corporate offices in an action related to imports of wood flooring products.

Nike shares jumped $3.30, or 5 percent, to $73.64, after it reported a quarterly profit that was higher than analysts expected.

This article appeared in print on page 8 of the September 30th, 2013 edition of Hamodia.