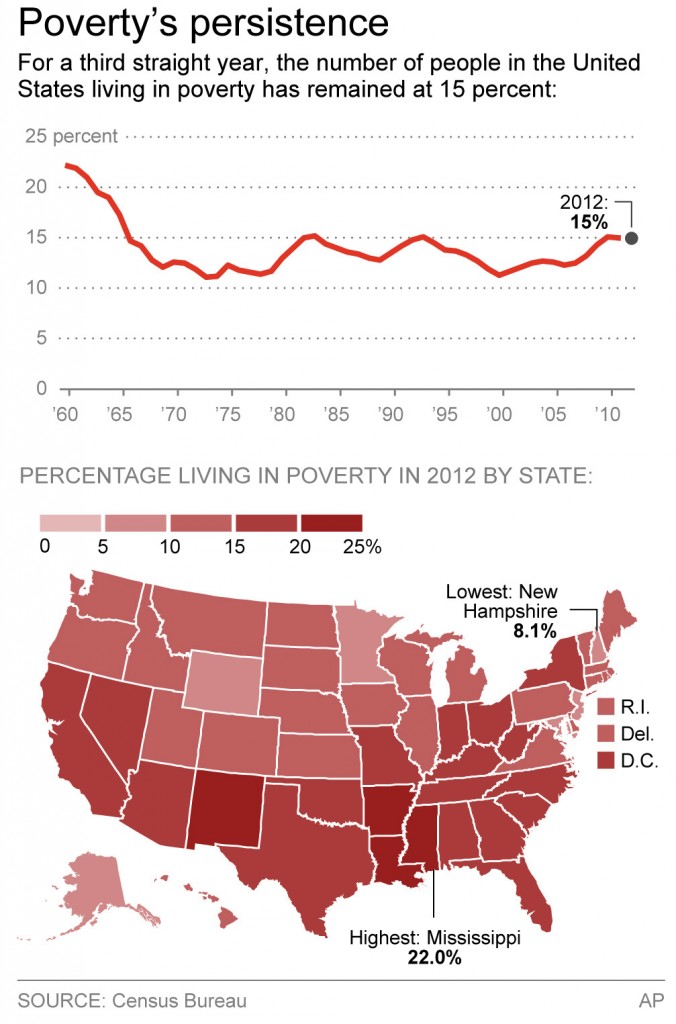 More than one in seven Americans were living in poverty, not statistically different from the 46.2 million of 2011, and the sixth straight year the rate had failed to improve, the Census Bureau reported Tuesday. Median income for the nation’s households was $51,017, also unchanged from the previous year after two consecutive annual declines. The share of people without health insurance did improve, but only a bit, from 15.7 percent to 15.4 percent.

“We’re in the doldrums, with high poverty and inequality as the new normal for the foreseeable future,” said Timothy Smeeding, an economics professor at the University of Wisconsin-Madison, who specializes in income inequality. “The fact we’ve seen no real recovery in employment and wages means we’ve just flatlined.”

Mississippi had the highest share of its residents in poverty, at 22 percent, according to rough calculations by the Census Bureau. It was followed by Louisiana, New Mexico and Arkansas. On the other end of the scale, New Hampshire had the lowest share, at 8.1 percent.

The last significant decline in the national poverty rate came in 2006, during the Bush administration and before the housing bubble burst and the recession hit. In 2011, the rate dipped to 15 percent from 15.1 percent, but census officials said that change was statistically insignificant.

For the past year, the official poverty line was an annual income of $23,492 for a family of four.

The Census Bureau’s annual report offers a snapshot of the economic well-being of U.S. households for 2012, when the unemployment rate averaged 8.1 percent, after reaching an average high of 9.6 percent in 2010. Typically, the poverty rate tends to move in a similar direction as the unemployment rate, so many analysts had been expecting a modest decline in poverty.

The latest census data shows that the gap between rich and poor was largely unchanged over the past year, having widened since 2007 to historic highs.

On Monday, Obama called attention to what he described as economic improvements — the nation’s gross domestic product did rise by 2.8 percent last year — and said congressional Republicans would reverse recent gains if they took uncompromising stands in connection with looming budget deadlines.

Some GOP conservatives have been demanding a delay of Obama’s new health care law, as the price for supporting continued federal government spending. The House is also expected to consider a bill this week that would cut food stamps for the poor by an estimated $4 billion annually — 10 times the size of cuts passed by the Democratic Senate — and allow states to put broad new work requirements in place for recipients.

“This lack of improvement in poverty is disappointing and discouraging,” said John Iceland, a former Census Bureau Chief of the poverty and health statistics branch, who is now a Penn State sociology professor. “This lack of progress in poverty indicates that these small improvements in the economy are not yet being equally shared by all.”

Ron Haskins, a senior fellow at the Brookings Institution who specializes in poverty, agreed.

“Everything’s on hold, but at a bad level; poverty and income did not change much in 2012,” he said. “So child poverty is still too high and family income is still too low. The recession may be over, but try telling that to these struggling families. Don’t expect things to change until the American economy begins to generate more jobs.”

The official poverty level is based on a government calculation that includes only income before tax deductions. It excludes capital gains or accumulated wealth, such as home ownership.

As a result, the rate takes into account the effects of some government benefits, such as unemployment compensation. It does not factor in noncash government aid, such as tax credits and food stamps.

If non-cash government aid were counted in the official formula, the earned income tax credit would have lifted another 5.5 million people above the poverty threshold. Counting food stamps would have boosted four million people, lowering the poverty rate to 13.7 percent.

The slight dip in Americans without health coverage meant 48 million people were without insurance. The drop was due mostly to increases in government coverage, such as Medicaid and Medicare. The number of people covered by employer-provided health insurance remained flat.

The decline in the uninsured was modest, compared to a bigger drop in 2011, which occurred due to increased coverage for young adults under the new health care law.

Because the main provisions of the Affordable Care Act don’t take effect until 2014, the latest census numbers offer a baseline number of uninsured, by which increased coverage and effectiveness of the law will be measured. Many conservative Republicans remain committed to repealing the law.

Starting next year, the government will offer tax credits for people without access to job-based health insurance, to buy private coverage through new markets, called exchanges, in each state. Open enrollment starts Oct 1. The new health care law also expands Medicaid to cover millions more low-income people, but so far only 24 states, plus Washington, D.C., have gone along with the expansion.

The Congressional Budget Office estimates that by next year, the health law will reduce the number of uninsured in the U.S. by about 25 percent. By 2017, it is projected that 92 percent of eligible Americans will have health insurance, a 10 percentage point increase from today’s level.