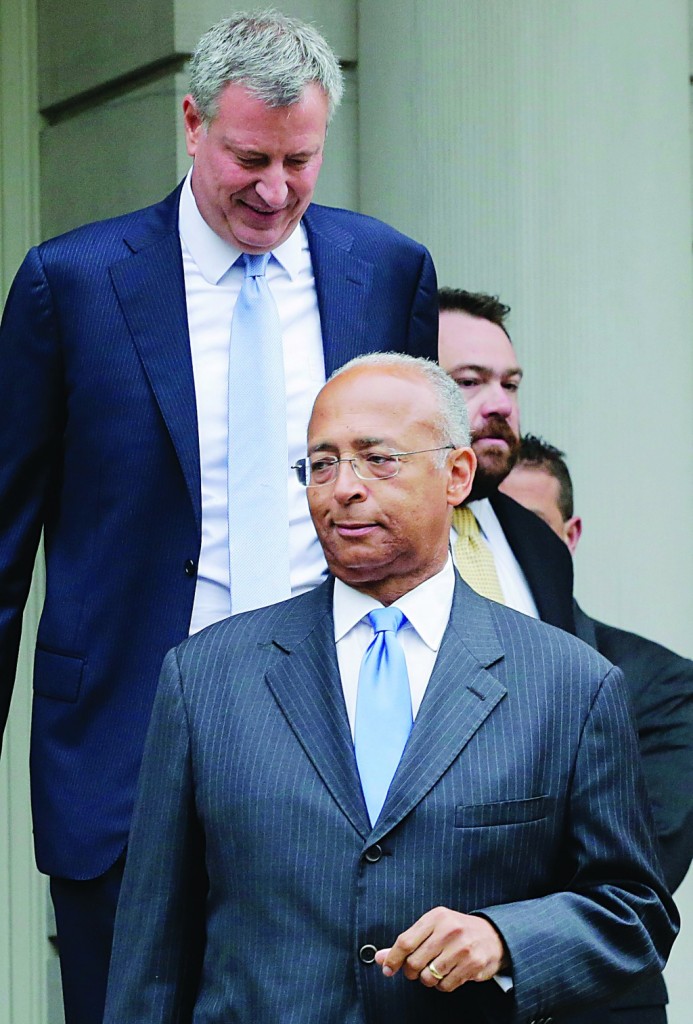 With the last of his primary opponents falling in line behind his unlikely mayoral candidacy, Bill de Blasio on Monday used his inauguration into the general election to reiterate his progressive “tale of two cities” to his broadest audience yet.

Even as Board of Elections workers continue to tally up the primary ballots from last week to see if de Blasio, the city’s public advocate, reached the required 40 percent needed to avoid a runoff, his chief rival conceded the race to him in a speech aimed at unifying a bruised party ahead of the general election in just two months.

In a carefully choreographed press conference on the steps of City Hall, Bill Thompson, flanked by de Blasio and Gov. Andrew Cuomo, said that he was throwing his “full support” behind de Blasio in order “to return a progressive to City Hall.”

“The path to getting there begins with Bill de Blasio walking through these doors as the next mayor of the city of New York,” Thompson said.

In a statement emailed to the press Monday, Joe Lhota, the Republican nominee, welcomed de Blasio into the race while blasting him for his unabashed liberalism.

“Dividing our city, increasing job-killing taxes and handcuffing our police is not the direction we need to take our city,” said Lhota, a deputy mayor in the Giuliani administration.

Although Democrats outnumber Republicans five to one in the Big Apple, Democrats have not elected one of their own as mayor since 1989. But 2013 is shaping up to be the year when they retake Gracie Mansion.

Tough-on-crime Giuliani campaigned in the context of a city with a murder rate that had just spiked to more than 2,000 a year, and Mayor Michael Bloomberg, taking office months after the Sept. 11, 2001, terrorist attacks devastated lower Manhattan, touted the hugely popular Giuliani’s endorsement and his experience as a business executive. None of those dynamics are currently present.

Monday’s concession brought an end to a seven-person Democratic primary, with its share of characters that Cuomo termed “doozies” on Monday.

The former city comptroller who lost to Bloomberg in 2009 attracted the majority of endorsements, including unions and leaders of the growing Hispanic community. And as the only African-American in the race, he was supposed to have snapped up that community’s vote.

Yet, Thompson, who also had significant support in the Orthodox community, fell short at the ballot box. He received about 26 percent of the vote, compared to de Blasio’s 40 percent.

Cuomo played a role in brokering the deal, according to comments by de Blasio at the press conference alluding to the governor’s “leadership” in keeping Democrats united in the mayoral race.

“New York will be an even greater city under the leadership of Mayor Bill de Blasio,” Cuomo said at the City Hall event. “…The best days of New York City are ahead, and today, we take the first step.”

In unofficial returns with 99 percent of precincts reporting, de Blasio had had 40.3 percent of the vote — slightly more than the 40 percent threshold needed to win outright.

A check of the more than 645,000 ballots cast was finished Sunday and was to be announced Monday afternoon. Some 78,000 absentee and other paper ballots were to begin being counted Monday.

Thompson reiterated Monday that every vote needed to be counted, devoting the bulk of his speech at blasting the city’s election agency for the tens of thousands of votes which were not yet counted.

“The reality is right now the votes have not be counted and it’s by no means clear when they will be counted, for all we know, given the Board of Elections, they might not be finished counting the paper ballots until the runoff, or until after it’s over, or until a few days before,” Thompson said.

Speaking to reporters after the news conference, he said he would have likely stayed in the race had the city issued him matching funds for a runoff.

“Not being able to really raise and spend, how can you run a campaign when you can’t do any of that?” Thompson asked.

After lagging behind in the polls, de Blasio got voters’ attention by protesting a hospital closing, during which he got himself arrested, and airing ads in which his teenage son gave voice — and his stupendous afro gave memorable imagery — to his liberal platform and showed New Yorkers de Blasio’s interracial family.

That earned him a victory across every demographic and age group, an unlikely scenario for the man who languished in the single digits for much of the campaign.

But de Blasio’s longtime alliance with Cuomo may become undone by some of his policy prescriptions. While they have a longstanding relationship, “many wrinkles and many grey hairs ago,” in Cuomo’s words Monday, there have been frequent tensions between the two.

And de Blasio’s central campaign proposal to hike taxes on the rich to pay for free preschool comes at an awkward time for the governor, who faces reelection next year. He would be wary of approving any tax rate increase following three years of boasting that he kept taxes down in New York, which pays the highest income tax of any state.

“De Blasio is in the Barack Obama, left-of-center mold, while Cuomo has presented himself as a Bill Clinton-type more moderate Democrat,” the New York Post’s Fred Dicker quoted an “Albany insider.” “It’s definitely a clash of claimed philosophies.’’