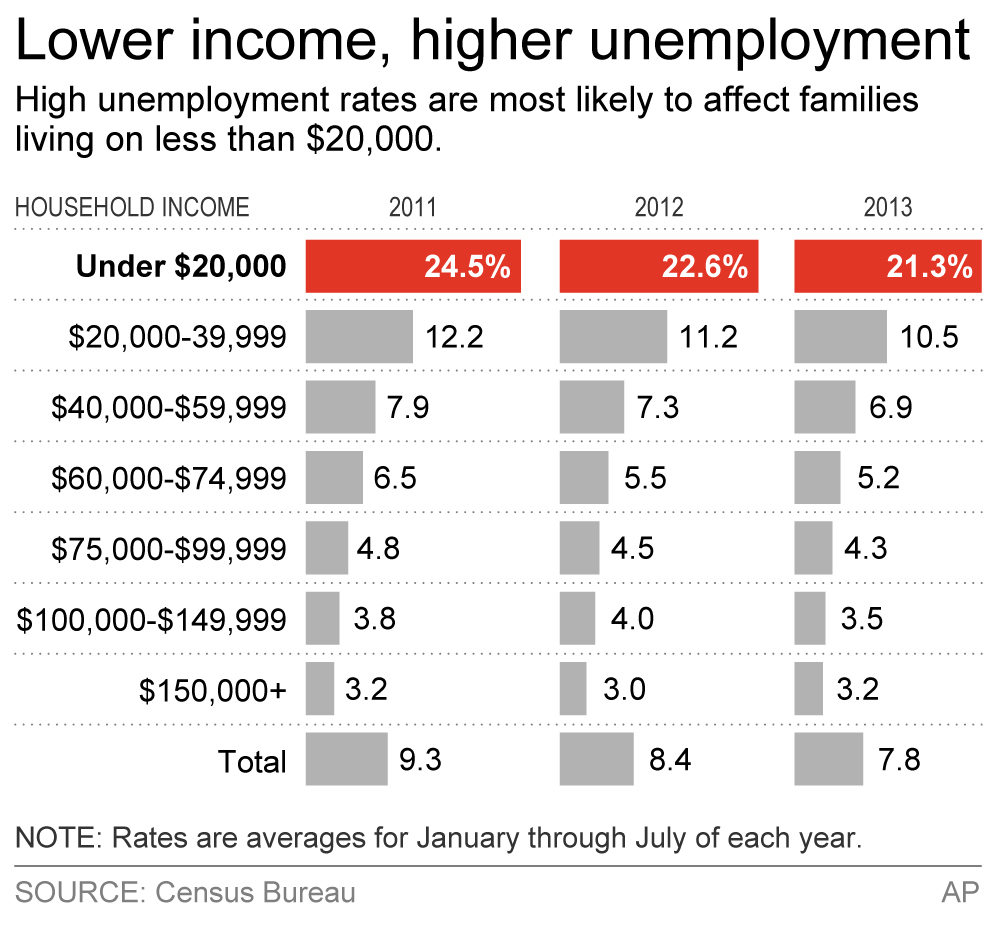 The gap in employment rates between America’s highest – and lowest-income families has stretched to its widest levels since officials began tracking the data a decade ago, according to an analysis of government data conducted for the Associated Press.

Rates of unemployment for the lowest-income families — those earning less than $20,000 — have topped 21 percent, nearly matching the rate for all workers during the 1930s Great Depression.

U.S. households with income of more than $150,000 a year have an unemployment rate of 3.2 percent, a level traditionally defined as full employment. At the same time, middle-income workers are increasingly being pushed into lower-wage jobs. Many of them, in turn, are displacing lower-skilled, low-income workers, who become unemployed or are forced to work fewer hours, the analysis shows.

The findings follow the government’s tepid jobs report this month, which showed a steep decline in the share of Americans working or looking for work. On Monday, President Barack Obama stressed the need to address widening inequality, after decades of a “winner-take-all economy, where a few do better and better and better, while everybody else just treads water or loses ground.”

“We have to make the investments necessary to attract good jobs, that pay good wages and offer high standards of living,” he said.

While the link between income and joblessness may seem apparent, the data are the first to establish how this factor has contributed to the erosion of the middle class, a traditional strength of the U.S. economy.

Based on employment-to-population ratios, which are seen as a reliable gauge of the labor market, the employment disparity between rich and poor households remains at the highest levels in more than a decade, the period for which comparable data are available.

“It’s pretty frustrating,” says Annette Guerra, 33, of San Antonio, who has been looking for a full-time job since she finished nursing school more than a year ago. During her search, she found that employers had become increasingly choosy about an applicant’s qualifications in the tight job market, often turning her away because she lacked previous nursing experience, or because she wasn’t certified in more areas.

Guerra says she now gets by doing “odds and ends” jobs, such as working as a pastry chef, bringing in $500 to $1,000 a month.  She says daily living can be challenging, as she cares for her mother, who has end-stage kidney disease.

“For those trying to get ahead, there should be some help from government or , to boost the economy and provide people with the necessary job training,” says Guerra, who hasn’t ruled out returning to college to get a business degree, once her financial situation is more stable. “I’m optimistic that things will start to look up, but it’s hard.”

Last year the average length of unemployment for U.S. workers reached 39.5 weeks, the highest level since World War II. The duration of unemployment has since edged lower, to 36.5 weeks, based on data from January to July, still relatively high historically.

Economists call this a “bumping down” or “crowding out” in the labor market, a domino effect that pushes out lower-income workers, pushes median income downward and contributes to income inequality. Because many mid-skill jobs are being lost to globalization and automation, recent U.S. growth in low-wage jobs has not come fast enough to absorb displaced workers at the bottom.

Low-wage workers are now older and better educated than ever, with especially large jumps in those with at least some college-level training.

“The people at the bottom are going to be continually squeezed, and I don’t see this ending anytime soon,” said Harvard economist Richard Freeman. “If the economy was growing enough, or if unions were stronger, it would be possible for the less educated to do better, and for the lower income to improve. But in our current world, where we are still adjusting to globalization, that is not very likely to happen.”

The figures are based on an analysis of the Census Bureau’s Current Population Survey by Sum and Northeastern University economist Ishwar Khatiwada. They are supplemented with material from  Massachusetts Institute of Technology’s David Autor, an economics professor known for his research on the disappearance of mid-skill positions, as well as John Schmitt, a senior economist at the Center for Economic and Policy Research, a Washington think tank. Mark Rank, a professor at Washington University in St. Louis, analyzed data on poverty.

The overall rise in both the unemployment rate and low-wage jobs, due to the recent recession, accounts for the record number of people who were stuck in poverty in 2011: 46.2 million, or 15 percent of the population. When the Census Bureau releases new 2012 poverty figures on Tuesday, most experts believe the numbers will show only slight improvement, if any, due to the slow pace of the recovery.

Overall, more than 16 percent of adults ages 16 and older are now “underutilized” in the labor market — that is, they are unemployed, “underemployed” in part-time jobs when full-time work is desired, or among the “hidden unemployed” who are not actively job hunting but express a desire for immediate work.

Loss of jobs in the recent recession has hit younger, less-educated workers especially hard. Fewer teenagers are taking on low-wage jobs, as older adults pushed out of disappearing mid-skill jobs, such as bank teller or administrative assistant, move down the ladder.

Recent analysis by the Associated Press-NORC Center for Public Affairs Research shows that whites and older workers are more pessimistic about their opportunities to advance, compared to other groups in the lower-wage workforce.

Eric Reichert, 45, of West Milford, N.J. Reichert, who holds a master’s degree in library science, is among the longer-term job seekers. He had hoped to find work as a legal librarian or in a similar research position, after he was laid off from a title insurance company in 2008. Reichert now works in a lower-wage administrative records position, also helping to care for his 8-year-old son, while his wife works full-time at a pharmaceutical company.

“I’m still looking, and I wish I could say that I will find a better job, but I can no longer say that with confidence,” he said. “At this point, I’m reconsidering what I’m going do, but it’s not like I’m 24 years old anymore.”