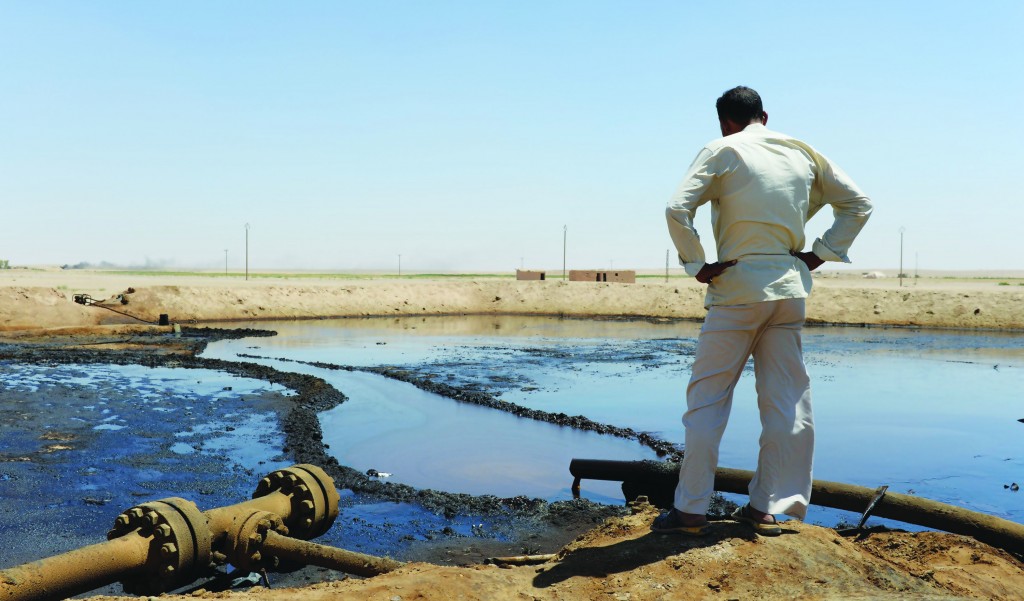 With colorful bandanas covering their faces to protect against the noxious smoke, displaced Syrians have been flocking to the country’s oil-producing east to scratch out a living by operating primitive refineries.

The pumps are running at the former state oil wells that dot the landscape, but since about a year ago, when the area came under the control of rebels who are battling to topple the government of President Bashar Assad, the pipeline has been shut down. Arab tribes in the region grabbed the land and now pocket the proceeds.

Usama Idris, 40, is one of the entrepreneurs who buy the crude, at 1,000 Syrian pounds — roughly $4.65 — a barrel. He then refines it into diesel fuel by a primitive and dangerous method — boiling it in vats over an open fire.

Many of the “refiners” are from the Deir el Zour area, but Idris is from Homs, some 180 miles southeast of here, and his story is typical of Syria’s internally displaced, of which there are some 4.5 million, according to U.N. estimates. He’s had to move five times in 18 months, forced each time from his temporary lodgings by government advances or food running out.

By training, he’s an Arabic-language teacher for elementary and middle schools but there’s almost nowhere now to teach, with the schools here housing thousands of displaced people, Idris and his family included.

So he risks his life and his lungs daily as an oil refiner. “I have no other income,” he told a McClatchy reporter.

Still, the $8 to $12 he earns each day isn’t enough to sustain his wife and four children.

Others earn still less, among them several of his neighbors from the Karm al-Zeitoun district of Homs, who help him operate the primitive smoke-belching refinery. “I make about $2 a day,” said Khalid, 18, who asked to be identified only by his first name for security reasons.

Idris isn’t the only one who’s had to make unthinkable compromises to keep going. At the natural gas processing plant nearby, which opened in 2000 and once was operated by ConocoPhillips, gas continues to flow through the Arab line — to the Syrian government.

“The gas plant still sends gas to the regime,” said Fadel Abdullah, 31, a former army officer who commands the rebels’ Al-Qadisiya brigade, which has charge of Deir el Zour. “If it didn’t, the regime would bomb the plant.”

In Jandar, south of Homs, the government burns the natural gas to generate electricity. The gas is sent for free, but the government pays the salaries of some 400 technical and white-collar staff who keep the plant going, plant employees say.

The only exception to this is bottled gas, which is generally used in Syria for cooking. That concession belongs to the Nusra Front, the al-Qaida-affiliated group that’s been at the forefront of many of the anti-Assad forces’ victories. Natural gas, drawn from the pipeline, is sold close to cost and then resold in other parts of Syria at a substantial markup.

Deir el Zour supplies about 10 percent of Syria’s natural gas needs, local experts said, making it a vital factor in the country’s energy supplies. When the pipeline shut down in mid-July — apparently because of a squabble between rebels from the more moderate Free Syrian Army and Nusra — the lights went off in Damascus.

“Forty-five percent of the Syrian people are getting their electricity from gas,” Abdullah said.

The gas plant has come under government attack, however. In April, shelling from government troops stationed across the Euphrates River destroyed a warehouse where American-origin spare parts were stored. Distressed plant officials phoned the national Oil Ministry and pleaded for the government to halt the attack. After about a half-hour, the shelling stopped.

Employees think the shelling was the work of a local commander, not some higher-level official. “The government doesn’t control its soldiers in areas of battle,” said one employee who asked that he not be named for security reasons.

Whatever the cause, a shutdown usually leads to further problems. Thieves, for example, take advantage of the electricity cutoff to steal electrical cables and strip them of their copper, which they can resell.

The oil pipeline no longer operates and has been “completely compromised,” said a gas plant employee who also did not want to be named.

Lawlessness prevails. At one of the wellheads, controlled by the al-Agaidat al-Bakayir tribe, a member didn’t miss a beat when he was asked who owns the well. “We own the wellhead — until the next government takes it over,” he said, identifying himself only as Uday, age 27.

He said his tribe wasn’t concerned about losing its claim to another tribe. “We stole it,” he said. “We grabbed it. We are all thieves.”