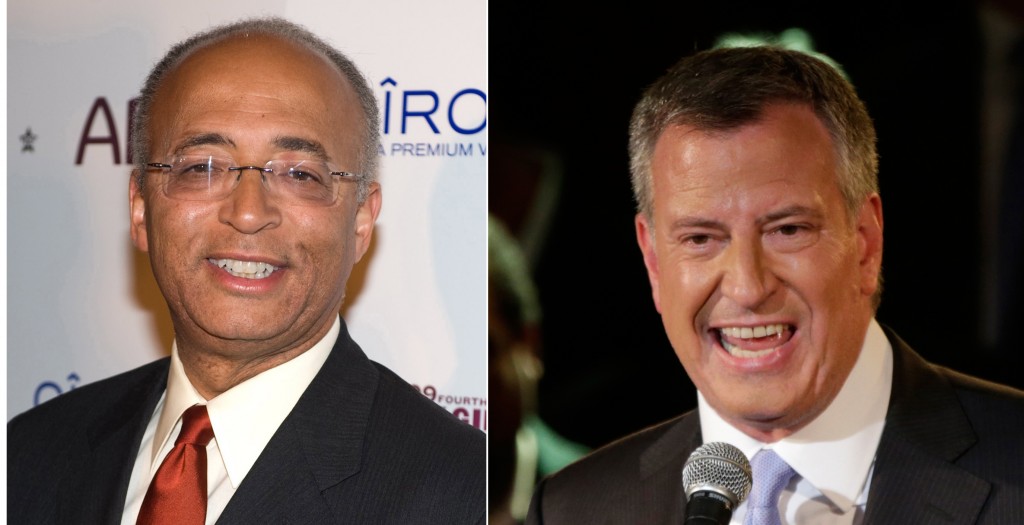 Just 700,000 New Yorkers headed to the polls last Tuesday, making it a race more of whose opponents’ backers didn’t vote than who got his own supporters to the ballot box.

A little more than 4,000 Boro Parkers turned up to vote, with about double that number in Flatbush. Bill de Blasio won both heavily Orthodox neighborhoods, with Bill Thompson coming in a close second. Williamsburg went for Thompson by an approximately 2 to 1 margin.

De Blasio, the city’s public advocate who had previously represented parts of Boro Park in the city council, got 47 percent in Boro Park — to Thompson’s 31 percent and Erick Salgado’s 8 percent — and 53 percent in Flatbush, compared to Thompson’s 25 percent.

In the Republican primary, only 752 voters cast their ballots in Boro Park, with 348 going for Lhota, 286 for John Catsimatidis and 118 to George McDonald.

The general election for New York City mayor began with the Democratic front-runner joining Al Sharpton for his weekly rally in Harlem Saturday while the Republican nominee emphasizing that he was a Republican liberal New Yorkers could vote for.

Bill de Blasio, the city’s public advocate who awaits the verdict of the embattled board of elections to find out if his victory last Tuesday topped the 40 percent mark required to avoid a runoff, told the crowd at Sharpton’s National Action Network that he is campaigning for affordable housing, educational opportunities for all and ending the police practice of stopping and frisking large numbers of young black and Hispanic men.

Meanwhile, Bill Thompson, who garnered 26 percent in the sparsely attended primary, said he will not concede until every vote is counted. Emerging from a meeting with top backers Friday, the former city comptroller vowed to remain in the race, ignoring a growing phalanx of calls by Democratic party leaders and former supporters for the party to unify ahead of the Nov. 5 election.

“As a democracy, our top priority must be that every vote be counted,” Thompson said.

With 98 percent of the precincts reporting, de Blasio had 40.3 percent. That tally, however, was unofficial, and did not include more than 70,000 emergency, affidavit and absentee paper ballots. The Board of Elections began its official count Friday, counting results from each of the more than 5,000 voting machines used. The process is expected to take two days.

The board then begins Monday to count the more than 16,000 valid absentee ballots that have been received. They will continue to be accepted until Tuesday as long as they are postmarked by Sept. 10.

Republican Joe Lhota, meanwhile, said he is “very different from the national Republicans,” emphasizing his liberal social views in an MSNBC interview.

“There are rooms within the Republican party that I would not be allowed in,” Lhota said. “In fact, I’ll probably be excluded because of my social views.”

Bill de Blasio is poised to become New York’s most progressive mayor in four decades, as he turned a perpetual polling slump into a campaign that swept all the five boroughs, all demographics and age groups.

But de Blasio’s strong showing, and possible outright victory, in Tuesday’s primary has reportedly alarmed many in the business community who fret his tax hike proposal could jeopardize the city’s fragile economic progress.

De Blasio has made his idea to raise tax rates on those earning more than $500,000 to pay for free pre-school the centerpiece of his campaign. The idea received rave reviews from celebrities and leftist publications across the country.

But while some business groups fear antagonizing the man who very likely will be the city’s next mayor, others are scrambling for strategies on how to deal with him. De Blasio’s description of New York as a “tale of two cities” may drive some longtime Democratic donors into Republican Joe Lhota’s camp. The groups representing some 25 percent of the city’s tax base say they are waiting to see if de Blasio repositions himself as a moderate ahead of the general election.

“After two decades of Giuliani and Bloomberg, the business community is concerned with how Bill de Blasio has sounded in comparison,” said Daniel Greenhaus, managing director of a financial-services firm. “All eyes turn to the general election to see how de Blasio positions himself.”

Lhota, a deputy mayor in Rudy Giuliani’s administration, has accused his opponent of advancing an agenda that has “historically brought our city to the brink of bankruptcy and rampant civic decay.”

Meanwhile, Gov. Andrew Cuomo, who would have to approve any tax rate hike, said he was “not thrilled” with de Blasio’s plan, according to a New York Post source.

“Campaign plans often come down to bumper stickers,” Cuomo said. “And I’ll be curious to find out exactly what the real plans are, and once we have a real discussion, then I’ll have an opinion.”

Another issue that concerns some in the business community is the hundreds of public sector union contracts that have expired since Mayor Michael Bloomberg said the city cannot afford the raises demanded. Lhota has said retroactive raises are off the table, while de Blasio hasn’t ruled them out.

Outside groups may play a big role in the upcoming election. Progressive groups — including rumors of a big expenditure by liberal financier George Soros — will be running ads for de Blasio, while a newly created group, New Yorkers for Proven Leadership, has received financial support on behalf of Lhota from David Koch, a billionaire with a long history of supporting conservative causes.

Michael Bloomberg said Friday he won’t endorse a candidate for mayor, keeping his power and his massive wallet from both the Republican who would gain needed creditability from an endorsement and the Democrat who surged to victory running as the anti-Bloomberg.

“I don’t want to do anything that complicates it for the next mayor and that’s one of the reasons I won’t make an endorsement in the race,” Bloomberg said during his weekly appearance. “I’ll leave campaigning to the campaigners. But whoever the voters elect, I want to make sure that person succeeds.”

Bloomberg may have wanted to avoid a repeat of the firestorm that erupted after his last comments about the race. In an interview with New York Magazine published last weekend, Bloomberg said de Blasio’s campaign, which is based on solving income inequality, was a form of “class warfare” and was “racist,” because the public advocate used his biracial family in commercials.

Despite polls showing that voters liked Bloomberg’s policies but wanted a more empathetic mayor, de Blasio offered himself as the only Democrat to make a clean break with Bloomberg policies. He joked on Friday that he had been “waiting by the phone” for Bloomberg’s endorsement.

Republican billionaire John Catsimatidis who lost in the primary to Joe Lhota, announced Friday he would not contest the election using the two third-party lines he secured earlier in the year.

“He looked at his options and made a rationale decision about what is best for himself and our city,” spokesman Rob Ryan said.

In the primary which saw a mere 12 percent of the city’s tiny Republican voter come to the polls, Catsimatidis came in second, losing 52 to 40 percent to Lhota. George McDonald got the rest of the votes. But prior to the primary, Catsimatidis had said he planned to run in the general election on the Liberal party line and another party he secured for himself, whether or not he won the GOP nomination. McDonald has not yet made a decision if he will run on a third party line.

During his victory speech Tuesday, Lhota called on his two opponents to help him in his general election bid. “John is a good man and a solid New Yorker. He and I agree on more than we disagree,” Lhota said. “George is a great guy and a visionary leader. He has become a true friend during this primary. I will seek the advice and counsel of these men as my campaign goes forward.”

Ignored by the Media, Race for Public Advocate Heads for Runoff

With no candidate winning 40 percent of the vote for city public advocate, City Councilwoman Letitia James and state Sen. Daniel Squadron, both Brooklyn Democrats, are headed to a runoff on Oct. 1.

James garnered 36 percent of the vote, with Squadron coming in at 33 percent for the office which is little understood by New Yorkers and has come under fire for its $2 million annual budget. Foes say that the office, which is supposed to be the people’s advocate in city government, mimics the job of city councilmen and was made redundant by the 311 call center.

Certain to inflame NYC residents is the $13 million cost for a runoff election, which is nearly double the expense of a full four-year term of keeping the office. That would be magnified if there is no mayoral runoff.

While the Democratic primary plays out in lever machine countings and lawyer arguments, the borough of Brooklyn was the big winner on Tuesday night: Both the Republican and probable Democratic nominee call it home, the first time in more than 100 years the borough has played such a prominent role.

In his primary night speech, Bill de Blasio invoked his “beloved Brooklyn,” and Joe Lhota spoke about walking “along the beautiful Brooklyn Bridge Park and you will see neighborhood after neighborhood transformed into great places to live, work and raise a family.”

Carlo Scissura, the president of the Brooklyn Chamber of Commerce, said, “The winds have shifted across the East River.”

The last time Brooklyn sent one of its own to City Hall was in 1973, when Abe Beame was elected mayor. Now, de Blasio, who lives in Park Slope, and Lhota, from Brooklyn Heights, is giving the borough back its good name.

Shomrim founder Chaim Deutsch won the Democratic primary to represent parts of Flatbush, beating out three other Russian candidates in the Russian-majority 48th council district to potentially become the second Orthodox Jew in the city council.

Deutsch, who serves as the Jewish liaison for retiring Councilman Mike Nelson, will face Republican David Storobin, a former state senator, in the general election in November. He beat out his closest challenger, Ari Kagan, winning 34 percent of the vote in the heavily Orthodox area, to Kagan’s 31 percent, a difference of close to 300 votes. Theresa Scavo won 18 percent and Igor Oberman won 15 percent.

“Sometimes the nice guy wins, and this is an example of where it actually can happen,” Nelson said at the victory party on Tuesday night. “He’s been doing my job, so to speak, for a long time. He’s the go-to guy when people have problems.”

Kagan, a journalist in the Russian language media, did well in the Russian areas, but Deutsch pulled together a coalition of Orthodox Jews, Southeast Asians and Muslims.

In other news, Mendy Mirocznik, a yeshivah alumnus vying for a Staten Island council seat, lost 60 to 40 percent to Steven Matteo.