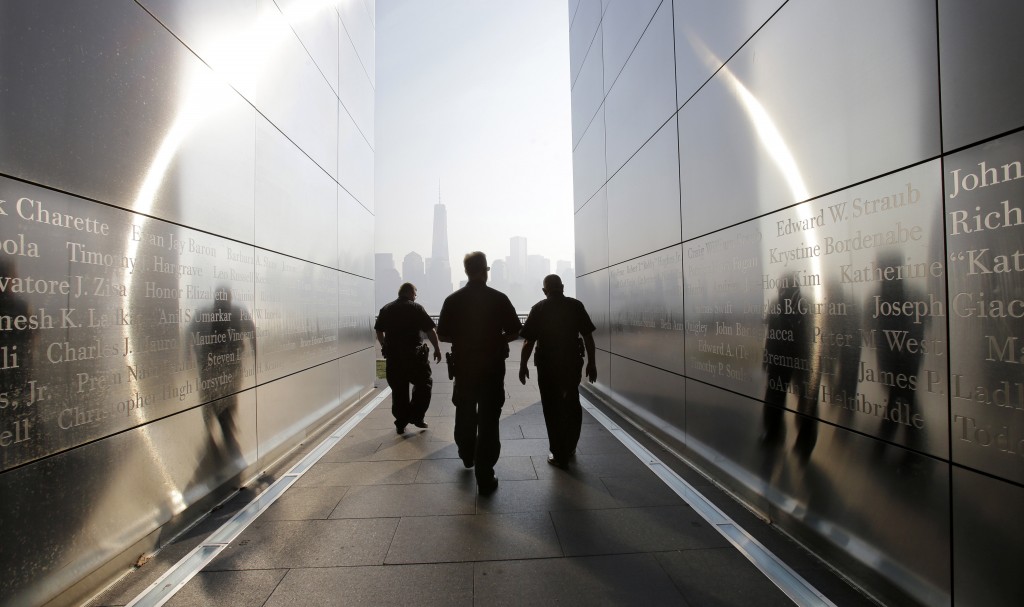 Bagpipes, bells and a reading of the names of the nearly 3,000 people killed when hijacked jetliners crashed into the World Trade Center, the Pentagon and a Pennsylvania field marked the 12th anniversary of the September 11 attacks in 2001.

More than a thousand people gathered Wednesday on a hot and hazy morning at the National September 11 Memorial plaza in Manhattan, for the annual reading of victims’ names from both the 1993 and 2001 attacks on the World Trade Center.

Bagpipes and a youth choir ushered in the start of the solemn proceedings, held around two reflecting pools that stand in the footprint of the fallen twin towers.

“To my nephew Michael Joseph Mullin, we miss you and think of you every single day,” said one of the 250 people chosen to read names. “You’re gone but not forgotten,” another woman said of her lost cousin.

In keeping with a tradition that began last year, no public officials will speak at the New York ceremony, though former New York Mayor Rudolph Giuliani, his successor Michael Bloomberg, Police Commissioner Raymond Kelly, and other city and state leaders were in attendance.

They observed a citywide moment of silence at 8:46 a.m. EDT, the time American Airlines Flight 11 crashed into the North Tower, with a second pause at 9:03 a.m. when United Airlines Flight 175 struck the South Tower.

Further moments of silence will be observed at 9:37 a.m., when American Airlines Flight 77 hit the Pentagon; at 9:59 a.m. when the South Tower fell; at 10:03 a.m. when United Flight 93 hit the ground near Shanksville, Pennsylvania; and at 10:28 a.m., when the North Tower collapsed.

Two skyscrapers are nearly completed on either side of the plaza, including One World Trade Center, the tallest building in the Western Hemisphere at 1,776 feet, a symbolic number chosen to allude to the year of the Declaration of Independence.

In Washington, President Barack Obama and Vice President Joe Biden marked the first moment of silence on the South Lawn of the White House, as a bell tolled.

At the Flight 93 National Memorial in Pennsylvania, the National Park Service planned a memorial service on Wednesday starting at 9:45 a.m., including a reading of the names of the Flight 93 passengers and crew, a ringing of bells, a wreath-laying and brief remarks.

A number of cities will hold ceremonies, including 21-gun salutes, moments of silence and memorial services Wednesday to remember those who lost their lives, including the police officers and firefighters killed as they attempted to save the victims of the attacks.