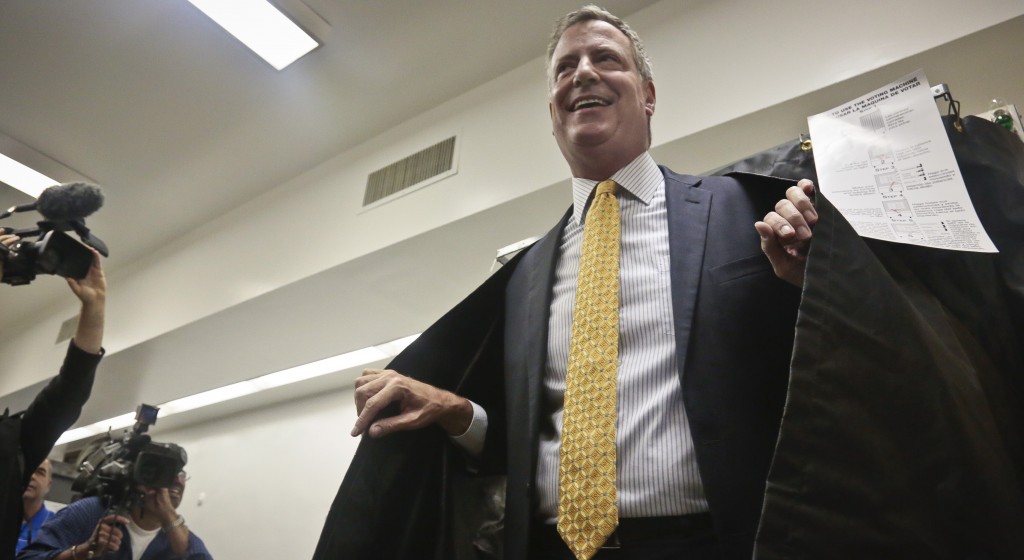 Public Advocate Bill de Blasio capped a surge from seemingly nowhere in New York City’s mayoral primary Tuesday with a commanding lead on his Democratic opponents Tuesday, hovering near the threshold needed to avoid a runoff.

Former Metropolitan Transit Authority Chairman Joe Lhota easily won in the GOP nomination, capping a chaotic primary to succeed 12 years of Mayor Michael Bloomberg. The night also marked the end to the bid by Christine Quinn, the City Council leader, trying to become the first female mayor, and to the political comebacks of Anthony Weiner and Eliot Spitzer.

With 94 percent of precincts reporting, de Blasio has about 40.02 percent of the total vote. He needs to stay above 40 percent in order to avoid triggering an automatic Oct. 1 runoff. If he cannot, he will face former city Comptroller Bill Thompson, who has 26.35 percent.

City Council Speaker Christine Quinn was third at 15.16 percent, followed by current city Comptroller John Liu at 7.22 percent and Weiner at 4.97 percent. Elections officials are expected to count an additional 30,000 or more votes in coming days as absentee ballots arrive by mail and paperwork comes in from voters who had problems at the polls.

De Blasio’s rise in the race to succeed Mayor Michael Bloomberg was as sudden as it was unexpected.

Not even two months ago, he was an afterthought in the campaign but surged in part thanks to an ad blitz that centered on his interracial family, his headline-grabbing arrest while protesting the possible closure of a Brooklyn hospital and the defection of ex-congressman Anthony Weiner’s former supporters.

Exit polling showed the appeal of de Blasio, the city’s elected public advocate, to be broad-based: He was ahead in all five boroughs; was ahead of Thompson, the only African-American candidate, with black voters and ahead of Quinn, the lone woman in the race, with female voters.

The voter interviews were conducted by Edison Media Research for The Associated Press and other news organizations.

The winner of that contest will face Lhota in the Nov. 5 general election. Lhota, ex-MTA chairman and former deputy mayor to Rudolph Giuliani, defeated billionaire grocery magnate John Catsimatidis for the GOP nomination.

In the closely watched race for city comptroller, Manhattan Borough President Stringer defeated Spitzer, who was seeking a return to politics after resigning New York’s governor’s office in 2008.

The winner of the mayor’s race in November will assume the helm of the nation’s largest city at a critical juncture, as it experiences shrinking crime rates yet widening income inequality, and as the nearly completed One World Trade Center building symbolizes a new era after the terrorist attacks of 2001.

Bloomberg, the businessman Republican-turned-independent, is completing his third term. While the city’s registered Democrats outnumber Republicans 6 to 1, the GOP’s recent success in mayoral elections has been largely attributed to the aftermath of the Sept. 11 attacks or other extraordinary circumstances.

Nearly three-quarters of Democratic primary voters say the next mayor ought to move away from Bloomberg’s policies, according to the exit polls.

And De Blasio, 52, has fashioned himself as the cleanest break from the Bloomberg years, proposing a tax on the wealthy to fund universal pre-kindergarten and changes to city police practices he says discriminate against minorities.

“I’m a lefty and I’ve had enough of the righties,” said Jessica Safran, a business consultant from the Boerum Hill section of Brooklyn who voted for de Blasio. “Even if de Blasio moves to the center if he gets elected, he’ll be closer to the positions I want than the others.”

De Blasio, who worked in Bill Clinton’s White House and Hillary Rodham Clinton’s Senate campaign before being elected to the city council and then public advocate, the city’s official watchdog position.

“I liked what he said about the economic inequality in the city,” said Norma Vavolizza, 65, who lives in the Bronx and works in marketing. “I think it’s a serious issue that needs to be addressed.

All the candidates were hosting election night rallies in venues across the city. Each gathering went silent for 15 minutes when President Barack Obama addressed the nation on the situation in Syria.

Quinn was the front-runner for much of the year, boasting the biggest campaign war chest and strong establishment backing. But she was dogged by her support to change term limits to let Bloomberg run again in 2009, a decision unpopular with liberals who make up the bulk of Democratic primary voters.

Turnout appeared light, but the city’s complaint line received several thousand voting-related calls. Many reported jams and breakdowns in the antiquated lever machines, which were hauled out of retirement to replace much-maligned electronic devices.

The mayoral campaign was waged in hundreds of candidate forums and across millions of dollars of ads and was largely fought on the legacy of the Bloomberg era. Substantial policy differences were scarce among the Democrats, who agreed that the school system needed an overhaul, that the city’s poor had been forgotten, and that stop-and-frisk police tactics used to stop suspicious people needed changing amid claims that police unfairly targeted blacks and Latinos.

Thompson nearly defeated the billionaire mayor four years ago. This year, he ran a quiet, centrist campaign with hopes of receiving enough support from minorities to reach the runoff.

On the Republican side, the candidates largely pledged to follow Bloomberg’s lead, focusing on maintaining the city’s record low crime rates. Lhota led the race from start to finish, fending off Catsimatidis’ self-financed, unorthodox bid. Catsimatidis spent more than $4 million of his own money but was unable to stage a serious challenge.