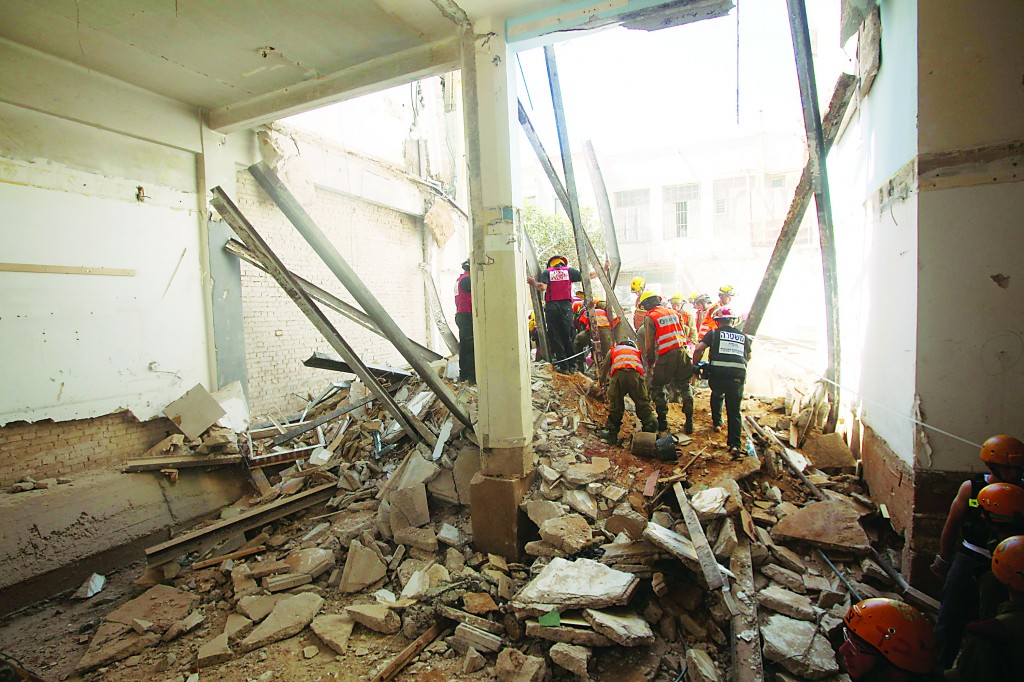 In a sudden, terrible crash that one eyewitness said sounded like a bomb going off, a three-story building in south Tel Aviv collapsed on Wednesday morning, killing one man and injuring five others.

Police, paramedics, fire fighters, along with IDF Home Front Command search and rescue troops who rushed to the scene discovered that the entire building had come crashing to the ground, leaving only the front exterior wall still standing.

The victim was identified as 55-year-old resident of Umm al-Fahm, Mahjina Asad, who worked as a contractor at the site, Ynet reported.

The emergency responders searched the rubble and pulled out five construction workers, who were evacuated to Ichilov and Wolfson hospitals.

The collapse occurred while renovation work was being done at the site. An initial investigation suggests that infrastructure work led to the collapse of the top floor over the workers. This in turn caused the collapse of the ceilings in the lower floors, while allowing an exterior wall to remain intact.

“It was like an atomic bomb, you can’t imagine the noise,” an eyewitness said.

“The roof and top floor collapsed as did the back side of the building which does not face the street. They’ve been doing some work on the foundations over the past few days; they were digging under the building. There was a loud noise, a cloud of dust and the structure collapsed over the workers.”

Nurit Greenberg had just arrived at her upholstery store in south Tel Aviv when the building across the street came crashing down, filled the street with a cloud of white dust.

Greenberg said she knew the contractor who was killed, describing him as a well-dressed, middle-aged man who would say good morning to her every day when he came to work.

Another witness from the neighborhood said he saw the contractor park his car outside the building, and waved to him. Moments later, the man was buried in the rubble.

Police are investigating, but in the meantime have ruled out a gas explosion as a cause of the collapse.