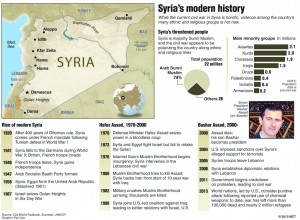 The U.S. and France on Tuesday pushed for a tough U.N. resolution to ensure Syrian President Bashar Assad’s regime turns over its chemical weapons stockpile, but Assad’s ally Russia demanded the West take the threat of force off the table if Damascus fails to meet its promises. The diplomatic split threatened a deal that could avert American strikes against Syria.

Assad’s government on Tuesday promised to cooperate fully with the Russian plan, which calls for Syria to put its chemical
weapons under international control, for eventual destruction.

Foreign Minister Walid al-Moallem told Lebanon’s Al-Mayadeen TV that Syria would place its chemical weapons locations in the hands of representatives of Russia, “other countries” and the United Nations. He promised that his country would also declare its long secret chemical arsenal, stop producing such weapons and sign conventions against them.

Wary that Damascus is only seeking to avoid U.S. military action, Washington and France said they seek strong U.N. language to enforce the Russian plan. France said it would put forward a draft resolution under Chapter 7 of the U.N. charter, making it enforceable with military action.

That met swift opposition from Russia.

Russian President Vladimir Putin said the plan can only work if “the American side and those who support the U.S.A, in this sense, reject the use of force.”

Russian Foreign Minister Sergey Lavrov told his French counterpart Laurent Fabius that it is unacceptable for the resolution to cite Chapter 7, his ministry said in a statement.

Secretary of State John Kerry, in turn, said the U.S. rejects a Russian suggestion that the U.N. endorsement come in the form of a non-binding statement from the Security Council president.

The U.S. has to have a full resolution — one that entails “consequences if games are played and somebody tries to undermine this,” he said.

A State Department official said later that Kerry would travel to Switzerland this week to discuss the deal with Lavrov. The official, who was not authorized to discuss the mission publicly and spoke on condition of anonymity, said the two diplomats would meet Thursday in Geneva.

The developments threatened what had been growing momentum toward a plan that would allow the Obama administration to back away from military action. Domestic support for a strike is uncertain in the United States, even as President Barack Obama seeks Congress’ backing for action — and there has been little international appetite to join forces against Assad.

The U.S. and its allies have insisted Assad must be punished for an alleged regime chemical weapons attack that killed hundreds outside Damascus. The Obama administration, France and others blame the regime, but Damascus says rebels — not its forces — were behind the attack. The U.S. has said more than 1,400 Syrians died; even conservative estimates from international organizations put the toll at several hundred.

Fabius said the resolution must have teeth to ensure the Russian plan is not “used as a diversion.”

French authorities “don’t want to fall into a trap” that could allow Assad’s regime to skirt accountability or buy time, he said. Syria’s credibility in accepting the plan would be determined “by accepting these precise conditions.”

He said the French draft resolution would demand Syria open its chemical weapons program to inspection, place it under international control, and ultimately dismantle it. A violation of that commitment, he said, would carry “very serious consequences.” The resolution would condemn the attack and bring those responsible to justice, he said.

Obama threw his support behind the resolution. British Prime Minister David Cameron said his country would join France and the U.S. in putting forward the proposal.

Russia, meanwhile, was working with Damascus on a detailed plan of action to be presented, Lavrov said. Russia will then be ready to finalize the plan with U.N. Secretary-General Ban Ki-moon and the Organization for the Prohibition of Chemical Weapons.

“We agreed to the Russian initiative as it should thwart the U.S. aggression against our country,” Syria’s al-Moallem said.

Obama, who was to deliver a national address on Syria later Tuesday, cautiously welcomed the proposal. But he said the U.S. is still prepared to go ahead with strikes if it falls through. He reached back into history — and the Cold War rivalry between the United States and the Soviet Union — to underline the need for enforcement.

“The key is, to paraphrase Ronald Reagan, that we don’t just trust, but we also verify,” Obama told CBS. “The importance is to make sure that the international community has confidence that these chemical weapons are under control, that they are not being used, that potentially they are removed from Syria and that they are destroyed.”

Obama said the idea actually had been broached in his 20-minute meeting with Putin last week on the sidelines of an economic summit in St. Petersburg, Russia. Obama said he directed Kerry to have more conversations with the Russians and “run this to ground.”

On Monday, Kerry said Assad could resolve the crisis by surrendering control of his chemical arsenal to the international community. Lavrov responded by promising to push Syria to place its chemical weapons under international control and then dismantle them quickly, to avert U.S. strikes. Syria’s acceptance came less than 24 hours later.

The Syrian National Coalition dismissed the Assad government’s turnaround as a maneuver to escape punishment for a crime against humanity. The coalition had been hoping for military strikes from abroad to tip the balance in the war of attrition between rebels and Assad’s forces.

This article appeared in print on page 1 of the September 11th, 2013 edition of Hamodia.