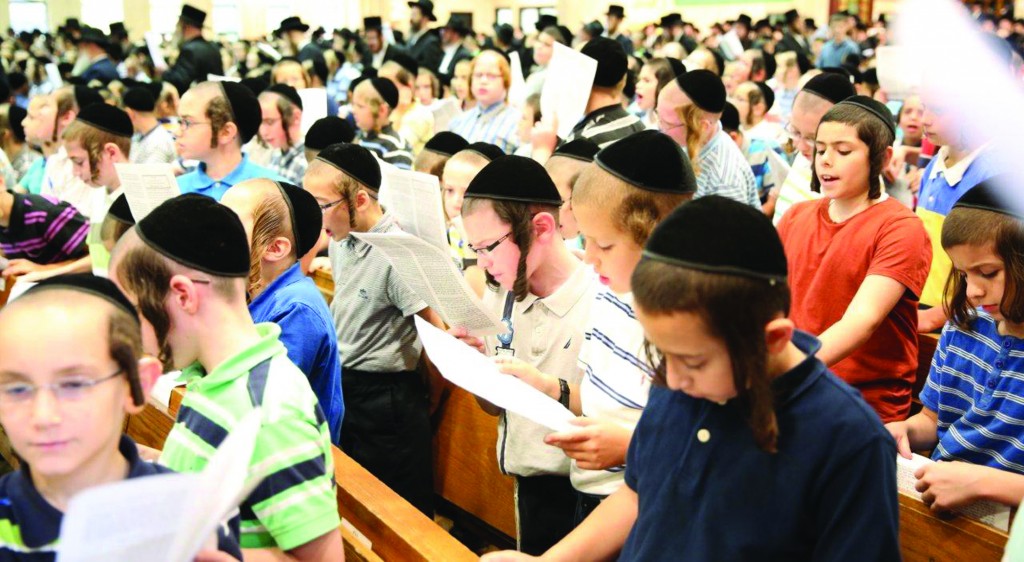 Chazal (Shabbos 119b) tell us that the world exists only in the zechus of the learning of tinokosshel beis rabban, and therefore we understand that the tefillos of children have the power to annul gezeiros ra’os and effect blessings and hashpa’os tovos for Klal Yisrael. With this in mind, the 20th annual Asifas Tehillim Ha’olami, a massive gathering for tefillah, Tehillim and hisorerus on behalf of the ill, the needy and all those suffering adversity in Klal Yisrael, took place on Tuesday, 6 Tishrei/Sept. 10, at the Bobover beismedrash on 15th Avenue and 48th Street in Boro Park, with the participation of numerous Admorim, Roshei Yeshivah and Rabbanim.

The asifah, held annually during Aseres Yemei Teshuvah, was organized by Misaskim, which has an distinguished record in providing support and assistance to individuals and families confronting crisis or tragedy, Rachmana litzlan, with compassion and professionalism. The immense project of organizing the annual Asifas Tehillim is only one example of the level of devotion on the part of the volunteers and staff of Misaskim.

Several thousand children from dozens of yeshivos filled the huge beis medrash. The yeshivah groups that were present represented various communities in the metropolitan area, which created an aura of achdus and surely contributed to the efficacy of the tefillos.

The vast assembly of tinokos shel beis rabban collectively pleading with the Ribbono shel Olam for heavenly compassion, their voices loudly reverberating in fervent tefillah, was an unforgettable scene. The tefillos and bakashos uttered by these pure,  untainted neshamos, we pray, had a tremendous impact in Shamayim and served to generate much-needed zechuyos for acheinu Bnei Yisrael.

The gathering was linked by audio hook-up to communities around the world so that about 30,000 of children davened and recited Tehillim at the same time in order to merit refuos and yeshuos for Klal Yisrael. In addition, for the first time the names of hundreds of cholim were scrolled on a large screen while the children were reciting the Tehillim.

The emcee for the event was Rabbi Avraham Meir Folman.

The annual event took on added significance this year in view of tragedies that have hit Jewish communities locally and worldwide, among them Hurricane Sandy, the economic crisis that has affected countless families, Yidden in prison in America and abroad, and many other physical and spiritual challenges.

The event was transmitted to approximately 130 locations nationwide and internationally. In the past, it has included the participation of yeshivah children in cities including Baltimore, Cleveland, Chicago, Dallas, Memphis, Milwaukee, Montreal and Toronto, as well as locations in California, Connecticut, Indiana, Florida, Georgia, Massachusetts, Michigan, Minnesota, Missouri, Pennsylvania and Rhode Island.

Internationally, it has included communities in London, Manchester, Gateshead, and locations in Holland, as well as Mexico City and sites in Argentina, Chile, Colombia, Costa Rica, Panama and Venezuela.

Countless Yidden paused from their activities to recite Tehillim wherever they were at the time of the asifah. Many followed the proceedings on the Kol Mevaser telephone line and online on the Misaskim site.

The gathering provided abundant hisorerus and inspiration to all who participated and will, we hope, b’ezras Hashem, bring many yeshuos to Klal Yisrael.