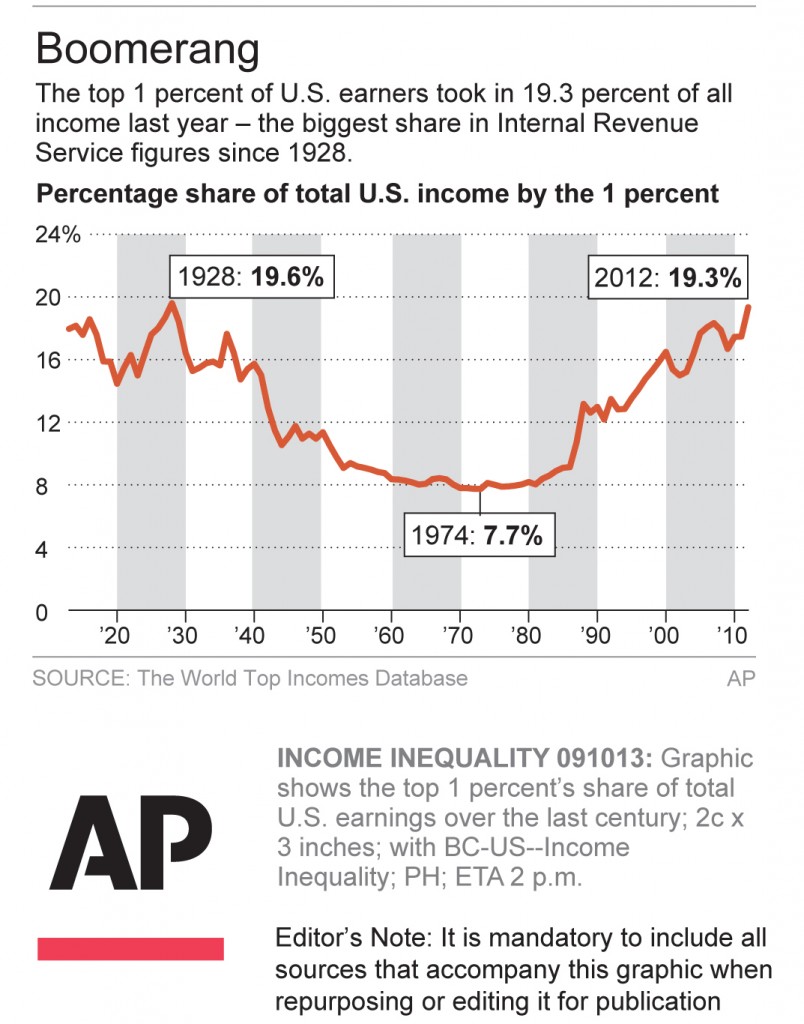 The gulf between the richest 1 percent and the rest of America is the widest it’s been since the Roaring ’20s.

The very wealthiest Americans earned more than 19 percent of the country’s household income last year – their biggest share since 1928, the year before the stock market crash. And the top 10 percent captured a record 48.2 percent of total earnings last year.

U.S. income inequality has been growing for almost three decades. And it grew again last year, according to an analysis of Internal Revenue Service figures dating to 1913 by economists at the University of California, Berkeley, the Paris School of Economics and Oxford University.

One of them, Berkeley’s Emmanuel Saez, said the incomes of the richest Americans surged last year in part because they cashed in stock holdings to avoid higher capital gains taxes that took effect in January.

In 2012, the incomes of the top 1 percent rose nearly 20 percent, compared with a 1 percent increase for the remaining 99 percent.

The richest Americans were hit hard by the financial crisis. Their incomes fell more than 36 percent in the Great Recession of 2007-09, as stock prices plummeted. Incomes for the bottom 99 percent fell just 11.6 percent, according to the analysis.

But since the recession officially ended in June 2009, the top 1 percent have enjoyed the benefits of rising corporate profits and stock prices: 95 percent of the income gains reported since 2009 have gone to the top 1 percent.

The income figures include wages, pension payments, dividends and capital gains from the sale of stocks and other assets. They do not include so-called transfer payments from government programs such as unemployment benefits and Social Security.

The gap between rich and poor narrowed after World War II, as unions negotiated better pay and benefits and as the government enacted a minimum wage and other policies to help the poor and middle class.

The top 1 percent’s share of income bottomed out at 7.7 percent in 1973 and has risen steadily since the early 1980s, according to the analysis.

Economists point to several reasons for widening income inequality. In some industries, U.S. workers now compete with low-wage labor in China and other developing countries. Clerical and call-center jobs have been outsourced to countries such as India and the Philippines.

Increasingly, technology is replacing workers in performing routine tasks. And union power has dwindled. The percentage of American workers represented by unions has dropped from 23.3 percent in 1983 to 12.5 percent last year, according to the Labor Department.

The changes have reduced costs for many employers. That is one reason corporate profits hit a record this year as a share of U.S. economic output, even though economic growth is sluggish and unemployment remains at a high 7.2 percent.

America’s top earners tend to be highly paid executives or entrepreneurs – the “working rich” – instead of elites who enjoy lives of leisure on inherited wealth, Saez wrote in a report that accompanied the new analysis.

Still, he added: “We need to decide as a society whether this increase in income inequality is efficient and acceptable.”