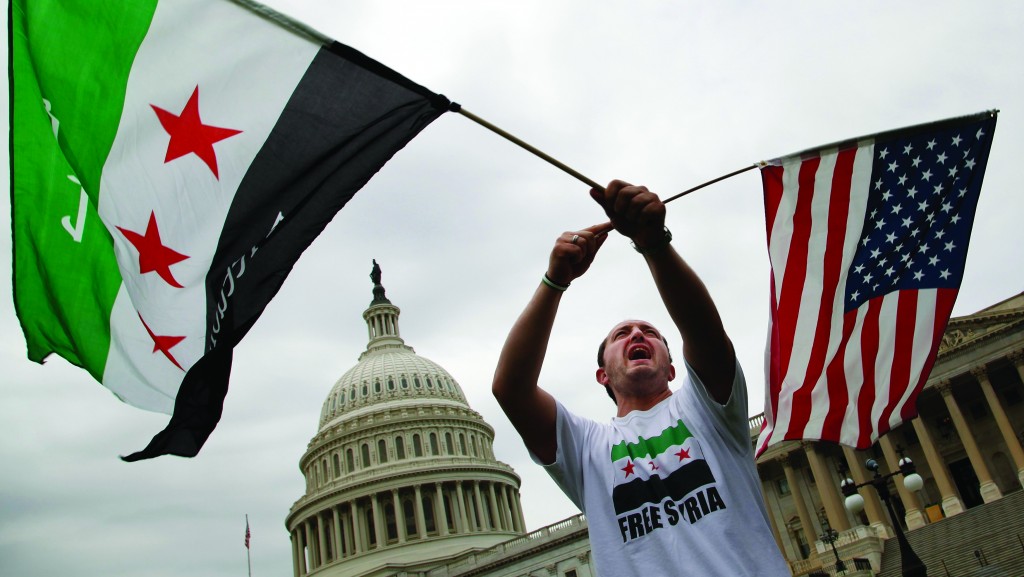 Confronted by the threat of U.S. air strikes, Syria swiftly welcomed the idea of turning over all of its chemical weapons for destruction on Monday, capping a remarkable chain of events that started with a suggestion from Secretary of State John Kerry, followed by a public proposal from Russia and immediate endorsement by the U.N. secretary-general.

The Obama administration tried to play down the significance of Kerry’s comments and scoffed at the Russian proposal’s prospects for success but ended up saying it would consider the idea. President Barack Obama pressed ahead with efforts to win congressional backing for U.S. military action, and officials insisted that Syrian President Bashar Assad’s government must be held accountable for using chemical weapons regardless of what happens to its stocks.

Building his case, Obama was appearing in six interviews Monday evening, and administration officials were briefing more members of Congress as they returned from summer recess. Obama will address the nation Tuesday night.

The White House cast Russia’s proposal as a direct result of the pressure being felt by Syria because of the threat of a U.S. strike and warned that it would not allow the idea to be used as a stalling tactic.

“Any positive reaction to the suggestion that they would forsake their chemical weapons by the Syrian government would never have been forthcoming if it weren’t for the fact that there is a credible threat of U.S. military action,” White House spokesman Jay Carney said.

“We would welcome any development — and would have for some time now — that would result in the international control of and the destruction of Syria’s chemical weapons stockpile,” he added.

Carney sidestepped questions on whether the U.S. and Russia had coordinated Monday’s proposal, saying only, “There are ongoing conversations on this matter at the highest level.” Still, he called the Russian proposal “a potential avenue.”

The proposal from Russian Foreign Minister Sergey Lavrov came just hours after Kerry told reporters in London that Assad could avoid a U.S. attack and resolve the crisis surrounding the use of chemical weapons by surrendering control of “every single bit” of his arsenal to the international community by the end of the week.

The State Department sought to tamp down the potential impact of Kerry’s comments by calling them a “rhetorical” response to a hypothetical question and not “a proposal.”

Kerry spoke by phone with Lavrov shortly after making his comments in London, and officials familiar with the call said Lavrov had told Kerry that he had seen the remarks and would be issuing a public statement. Kerry made clear that his comments were rhetorical and were not meant to be a proposal, according to the officials. They added that Kerry told Lavrov that the U.S. was not going to “play games,” but the U.S. would be willing to review a serious proposal. They stressed that he made clear that Lavrov could not present the idea as a joint U.S.-Russian proposal.

The officials commented only on condition of anonymity because they were not authorized to describe the information publicly.

Despite the qualifications, Lavrov seized on Kerry’s remarks as an opening to present his proposal.

Syrian Foreign Minister Walid al-Moallem immediately embraced it. And then in quick succession, U.N. chief Ban Ki-moon urged acceptance, British Prime Minister David Cameron said it was worth exploring, the French foreign ministry said it deserved close examination and former Secretary of State Hillary Rodham Clinton said any move by Syria to surrender its chemical weapons would be an “important step.” Clinton, in contrast with the White House and State Department, credited Kerry and Russia jointly for the proposal.

Obama faces a decidedly uphill fight to win congressional authorization for the use of force — and serious doubts by the American public — and Monday’s developments, even if they were unplanned, could provide him with a way out of a messy political and foreign policy bind.

Yet, the White House said it does not want Congress to delay votes on use-of-force resolutions while awaiting decisions on whether to proceed with transferring Syria’s chemical weapons stockpiles.

At the State Department, spokeswoman Marie Harf said the U.S. would consider the Russian proposal only with “serious skepticism” because it might be merely a stalling tactic. She said Syria had consistently refused to destroy its chemical weapons in the past.

In fact, she said the developments made it even more important for Congress to authorize the use of force against Syria as a means for pushing Assad to actually get rid of chemical weapons stocks.

The U.S. accuses Assad’s government of being behind an attack using sarin gas in a Damascus suburb on Aug. 21, killing 1,429 people. Some other estimates of the deaths are lower, but there is wide agreement that chemical weapons were used. Experts believe that the Syrian government’s arsenal of chemical weapons includes nerve agents like sarin, tabun and VX as well as mustard gas.

Russia’s proposal provided confirmation from Syria’s most important international ally that the Syrian government possesses chemical weapons, and al-Moallem’s welcome was a tacit acknowledgment. Syria’s foreign ministry last year retracted a threat to use chemical weapons, saying it was not acknowledging that it had them.