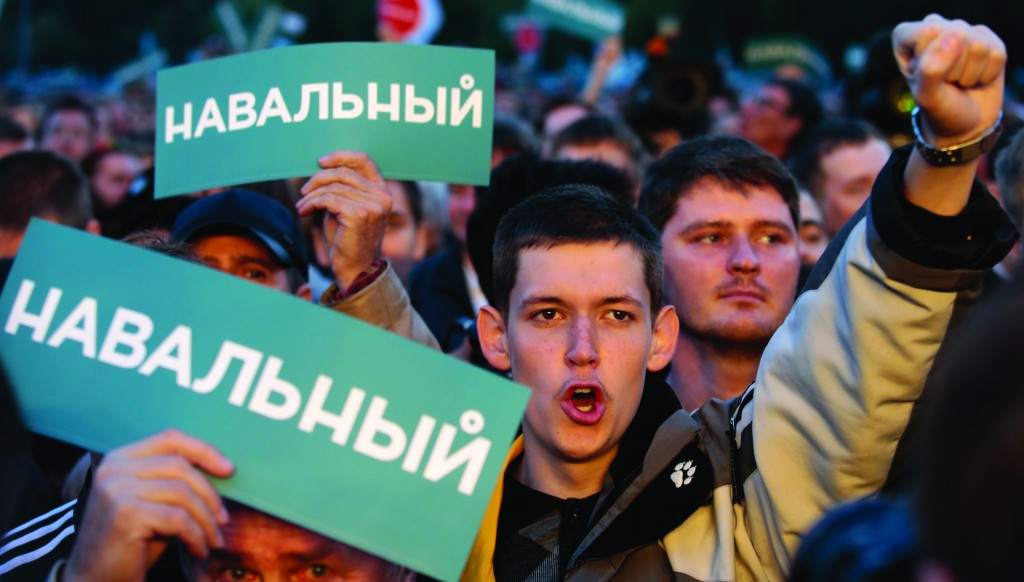 Thousands of cheering supporters answered a call by Russian opposition leader Alexei Navalny on Monday to rally in protest against a Moscow election he said was rigged to hand victory to an ally of President Vladimir Putin.

To chants of “Navalny, Navalny,” and buoyed by his own unexpectedly strong showing in Sunday’s mayoral election, the anti-corruption campaigner demanded a runoff be held between him and Kremlin-backed rival Sergei Sobyanin.

The turnout of at least 10,000 people, many of them wearing badges declaring “My mayor Navalny,” was a direct challenge to the Kremlin, which he hailed as the birth of a new opposition movement after more than 13 years of Putin’s rule.

“For so long now we all wanted to take part in a victory rally. We are tired of losing for 13 years now … I am sure we’ll get a second round,” he told the crowd gathered on a square across the river from the Kremlin.

To applause and cheers, he shouted: “A serious political opposition is born in Russia.”

Protesters — many of them men in their 20s and 30s — chanted “Second round, second round” and “Sobyanin is a coward.”

Sobyanin defended the vote late on Sunday as “the cleanest, most competitive, most open election in the history of Moscow.”

But rather than call for mass street protests like those he led after a 2011 national parliamentary election, Navalny on Monday urged his supporters to keep up the kind of grassroots political activism that resulted in him defying all expectations to win 27 percent of the vote.

The Navalny who took the stage Monday night was a more restrained and mature-sounding version of the fiery protest leader who inspired the mass protests against Putin that stretched through the winter of 2012, some of them held on the same square.

He said the time may come when he will call on his supporters to protest in defiance of police, “to turn over cars and light flares, whatever else,” but for now he asked them to keep up their political work through elections.

Representatives from Putin’s United Russia party, which dominates politics nationwide, still won most of the roughly 7,000 regional and local contests held across Russia on Sunday.

Meanwhile, Navalny also has a five-year jail term for theft hanging over him unless his appeal against the conviction succeeds. He says the sentence was Putin’s revenge for challenging him and that it was intended to remove him as a political threat.