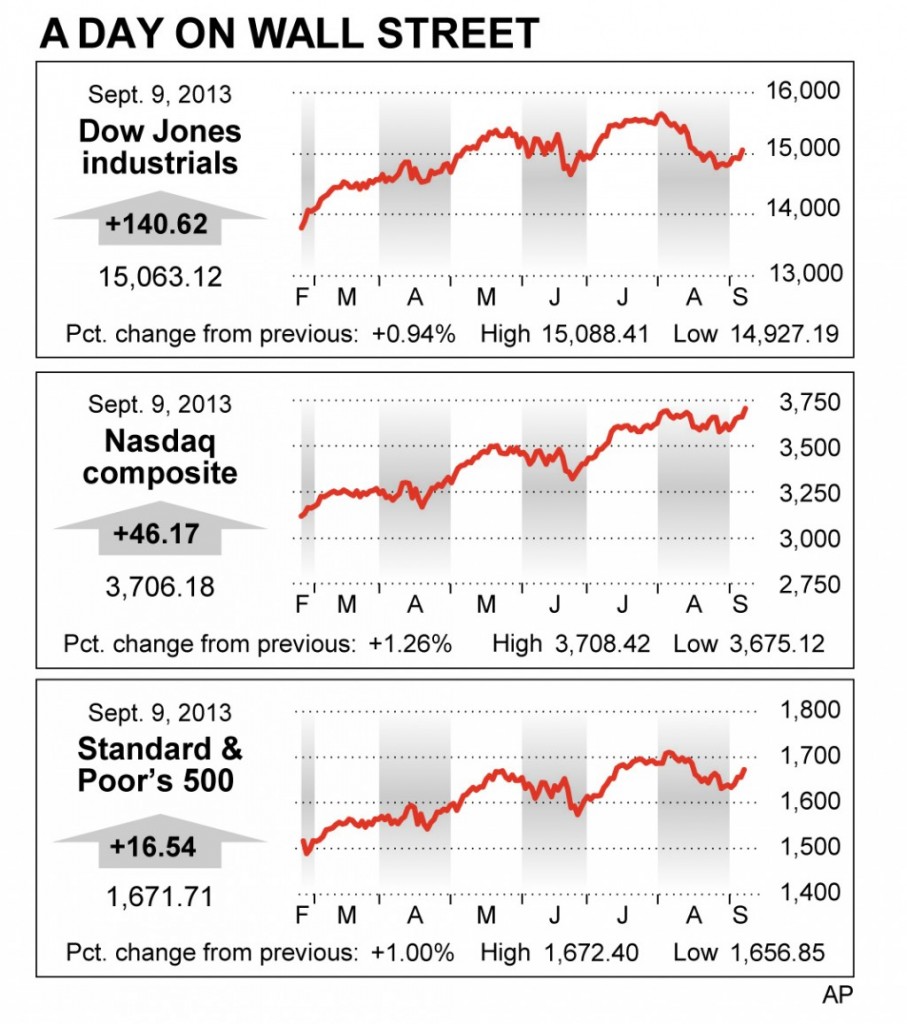 The stock market got a boost on Monday from mergers, homes and phones.

Homebuilding stocks were some of the biggest gainers in the Standard & Poor’s 500 index after Hovnavian Enterprises said home prices are rising and its backlog jumped almost 27 percent from a year earlier.

Homebuilding stocks have had a volatile year. Investors have been bullish because the housing market is recovering, but worried that rising interest rates make mortgages more expensive for home buyers.

All 10 industry groups in the S&P 500 rose. The index rose for the fifth day in a row, the longest since eight days of gains in July.

Two things about the Koch-Molex deal grabbed investors’ attention: Its components show up in a wide variety of products, including housing and autos, so Koch’s interest suggests that it sees broad economic improvement. Also, Koch is paying a large premium for Molex.

“I think it’s really exciting for just about everybody to see that big of a deal go through,” said Kim Forrest, senior analyst with portfolio management firm Fort Pitt Capital Group in Pittsburgh.

Delta Air Lines jumped $1.87, or 9.4 percent, to $21.76 after news that it would be added to the S&P 500 index. That benefits Delta because mutual funds and other investors that track the S&P 500 will now have to buy Delta’s stock. JPMorgan analyst Jamie Baker estimated that inclusion in the index will add demand for almost 89 million Delta shares.

Stocks in Asia rose lifted by Tokyo’s win for the 2020 Summer Olympics, Chinese export growth and an election victory by Australia’s conservative coalition.

The coalition supports repealing a 30 percent tax on coal and iron ore miners’ profits, which could help mining and other raw material companies. Caterpillar, which makes mining gear used in China and Australia, rose $2.20, or 2.6 percent, to $85.59, and mining company Cliffs Natural Resources was up $1.33, or 6.1 percent, to $23.18.

The positive news out of the Asia-Pacific region helped outweigh worries about rising interest rates and Syria, said Doug Cote, chief market strategist at ING U.S. Investment Management. “The risk of taking action seems too great for them to act,” he said. “I’m watching it daily, but I’m certainly not worried about it.”

In U.S. government bond trading, the yield on the 10-year Treasury note fell to 2.92 percent from 2.94 percent late Friday. It traded as high as 3 percent last Thursday, a key psychological level because the 10-year yield is the most widely used benchmark for borrowing in the U.S.