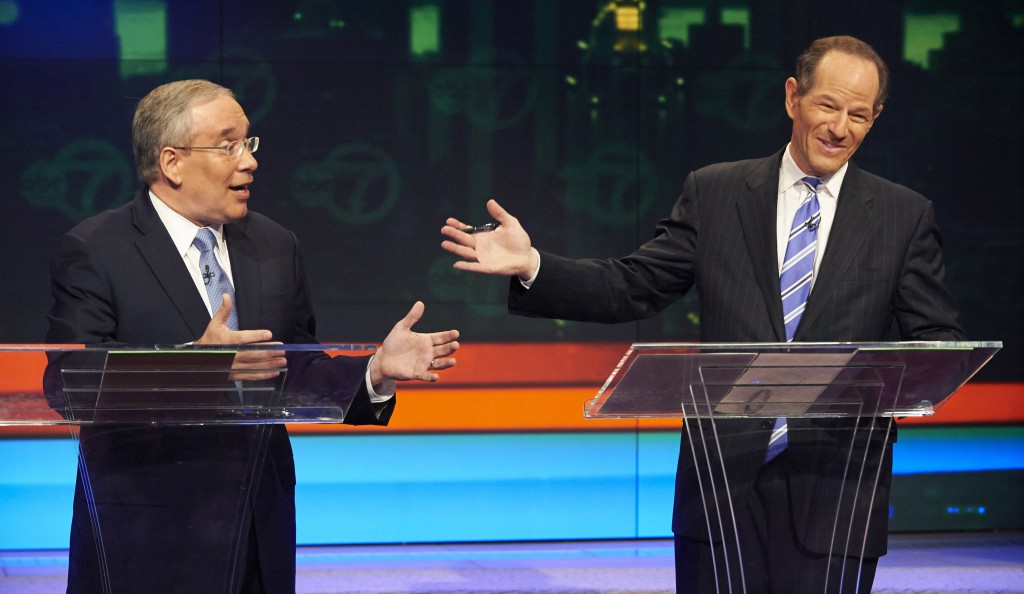 Scandal-dented ex-Gov. Eliot Spitzer and rival Scott Stringer charged through a last day of campaigning Monday before the Democratic primary for city comptroller, one of the most sharply contested city races this year.

With new polls showing a tight contest, both were spending the day making radio appearances, attending rallies and shaking voters’ hands on streets and at community centers.

Stringer, currently Manhattan’s borough president, is striving to capture a nomination he once expected to snag easily.

“The job of comptroller has to be watching the backs of people. … I’ve been out in the streets. I’ve been working on these issues” while Spitzer has been out of office, Stringer said in an interview Monday.

The campaign for the city’s top financial post was poised to be placid before Spitzer’s last-minute decision to run in July. Since then, the primary race has become keenly competitive — polls Sunday and Monday showed the candidates about even or Stringer slightly ahead — and suffused with bile.

A sample exchange, when Spitzer recently hit a talking point about Stringer’s sparse attendance at meetings of one of the city’s pension boards:

“I mean, you can’t get over like this, man,” exclaimed Stringer, who says he’s played an active role in the board’s decisions and has invoked that as a qualification for comptroller. His fellow trustees also usually send representatives instead of attending themselves.

The winner will face a Republican and other opponents Nov. 5.