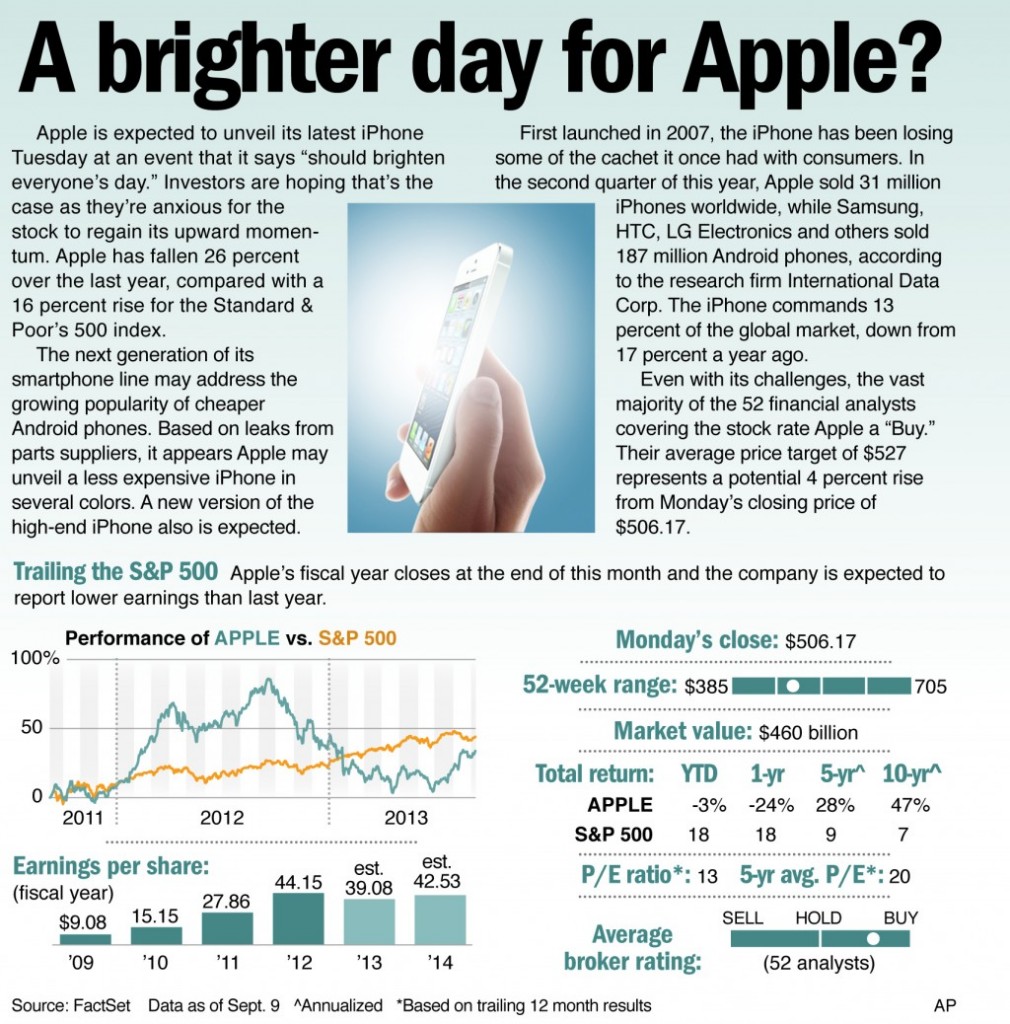 Apple is expected to unveil its latest take on the iPhone Tuesday, during an annual ritual that will probably cast a spotlight on the gadget maker’s drive to regain market share and its sluggish pace of innovation.

In keeping with its tight-lipped ways, Apple Inc. hasn’t disclosed what’s on the agenda for the coming-out party scheduled to begin at 10 a.m. PDT at its Cupertino, Calif., headquarters.

But this is the time of year that Apple typically shows off the latest generation of its iPhone, a device that has reshaped the way people use computers since its debut in 2007. Apple took the wraps off the iPhone 5, the current model, last September. The company has never waited longer than a year to update the iPhone, which has generated $88 billion in revenue during the past year.

Apple’s timetable for rolling out products has vexed many investors who have watched the company’s growth slow and profit margins decrease. Meanwhile, a bevy of smartphone makers, most of whom rely on Google Inc.’s free Android software, release wave after wave of devices that cost less than the iPhone. Those concerns are reflected in Apple’s stock price, which has declined nearly 30 percent since peaking at $705.07 at about the same time the iPhone 5 went on sale last year. The Standard & Poor’s 500 index has risen about 14 percent during the same stretch.

Even though Apple’s market value of roughly $460 billion is more than any other company in the world, the deterioration in its stock price is escalating the pressure on CEO Tim Cook to prove he’s the right leader to carry on the legacy of co-founder Steve Jobs. Since Cook became CEO two years ago, Apple has only pushed out new versions of products developed under Jobs, raising questions about whether the company’s technological vision has become blurred under the new regime.

In public appearances, Cook has repeatedly said Apple is working on some exciting breakthroughs, without revealing details. The company is believed to be working on a so-called “smartwatch,” which would work like a wrist-bound smartphone. Samsung Electronics, one of Apple’s biggest rivals, introduced its own $300 smartwatch, called Gear, last week, as did Sony and Qualcomm Inc. It’s unclear whether a smartwatch will be on Apple’s Tuesday agenda.

The company isn’t expected to reveal the latest model of its tablet computer, the iPad, until later in the fall. Apple introduced a smaller, less expensive version of the iPad last year, in response to the success of more compact and cheaper tablets running on the Android system.

This year’s refresh of the iPhone line may address the growing popularity of cheaper Android phones. Based on leaks from suppliers, it appears Apple is poised to release a less elaborate and less expensive version of the iPhone, in an attempt to appeal to consumers too frugal or too poor to pay for the high-end model that sells for more than $600 without a wireless contract.

If reports published in technology blogs and newspapers pan out, the stripped-down iPhone will be called the “5C” and be housed in plastic casing that will be offered in a variety of colors, instead of an aluminum casing.

Apple declined to comment, but an invitation for Tuesday’s event fed the multi-hued speculation swirling around the less expensive iPhone. The invitation was filled with colored bubbles, and predicted, “This should brighten everyone’s day.”

If it introduces a cheaper iPhone, Apple might end production of the iPhone 4 and iPhone 4S, which were released in 2010 and 2011, respectively. Those models have been sold at a discount to the iPhone 5, a factor that has lowered the average price Apple has fetched for its phones.

A new version of the high-end iPhone also is expected to be revealed Tuesday. The top-of-the-line model, expected to be dubbed the “5S,” will be the first to be sold with Apple’s revamped mobile software, iOS 7, already installed. The new system, which will automatically update apps installed on the device, can be downloaded on the iPhone 4 and later models, as well as on the tablets beginning with the iPad 2.

The redesigned software announced in June relies on simple graphical elements in neon and pastel colors. Gone is the effort to make the icons look like three-dimensional, embossed objects — a tactic, known as “skeuomorphism,” that was favored by Jobs. This will be the second iPhone model that Apple has released since Jobs’s death in October 2011.

Besides running on iOS 7, the upgraded iPhone may include technology that enables its owner to unlock the device with a fingerprint instead of a four-digit code. There is also speculation that the high-end iPhone will be sold in a golden color, to supplement the product line’s more prosaic choice of black or white.

“One of the big questions is whether Apple is going to push the envelope on the iPhone, or do they feel they have pretty much gone as far as they can go on the smartphone side of things?” said Gartner Inc. analyst Carolina Milanesi.

If there is a gold iPhone, it would be the latest sign of Apple’s intensifying focus on China — a market where hundreds of millions of internet-connected devices are expected to eventually be sold, as the standard of living improves in the world’s most populous country. The color gold is considered to be a sign of good fortune in China.

A less expensive iPhone would also help Apple boost sales in China and other less-developed countries, where people don’t have as much disposable income as in the U.S. and Europe.

In an unusual move, Apple has invited media to another event, in Beijing, which will be held a few hours after the gathering at its headquarters is scheduled to adjourn. The Beijing event has fed speculation that Apple has lined up a deal to sell its new iPhones through China Mobile, the country’s largest wireless carrier. It is an alliance that Cook has been openly courting. The Wall Street Journal last week cited anonymous people who said Apple is preparing to ship iPhones to China Mobile.

Although Apple still touts the iPhone as the best of its breed, the device has been losing some of its panache among consumers.

In the three months ending in June, Apple sold 31 million iPhones worldwide, compared to 187 million Android phones made by the likes of Samsung, HTC and LG Electronics, according to the research firm International Data Corp. That left the iPhone with 13 percent of the global market, down from 17 percent at the same time last year. Android phones held a 79 percent share, up from 69 percent last year, according to IDC.