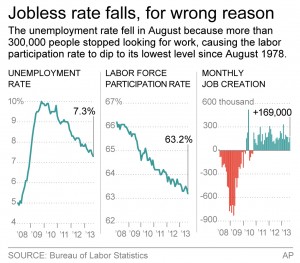 A softer-than-expected August jobs report from the government Friday suggests that weak hiring may be the norm for the remainder of the year, amid a still-impaired jobs market.

Mainstream economists had expected more hiring, given positive readings of other economic data, such as surging car sales and brisk business in the broad services sector. Instead, a ho-hum jobs report showed non-farm payrolls rose by just 169,000 new posts last month – below the 12-month average of 184,000 – and the lowest workforce participation rate since 1978.

With a lower percentage of eligible workers looking for jobs, the unemployment rate inched down a fraction, to 7.3 percent for August.

Statisticians also revised downward by 58,000 the earlier July jobs estimates, meaning there was actually an improvement of just 104,000 posts in July. Together, two soft months of hiring means there isn’t a lot of tailwind as Congress and the Obama administration face a Sept. 30 deadline to avoid a government shutdown over the budget, and a mid-October showdown over the debt ceiling that could trigger an embarrassing debt default.

“It will be more of the same in the jobs market for much of the remainder of the year,” said Mark Zandi, chief economist for forecaster Moody’s Analytics. “It is hard to see the job market kicking into a higher gear until the fiscal austerity begins to wind down. But I continue to expect better things from the job market next year as the austerity fades and the housing recovery gains traction.”

Stocks shrugged off the jobs report, initially opening up as traders took the soft hiring numbers as a sign that the Federal Reserve might delay or soften its expected September tapering, or pullback, from unconventional support it’s been giving the economy.

“It might be hard for the (Fed) to reach a taper decision based on these numbers. I have to think the probability of a delay in tapering just went up,” said Scott Anderson, chief economist for Bank of the West in San Francisco.

The Fed has been purchasing, at a pace of $85 billion a month, government and mortgage bonds in a bid to drive down lending rates and force risk-taking by investors. They must seek better returns than they’ve been getting on bonds, thus juicing the stock market and commodities such as crude oil and a range of farm products. Fed chairman Ben Bernanke, who is concluding his term, wants to begin weaning the economy off this support before his successor takes over.

Already, rates on the 30-year fixed mortgage have risen sharply in recent months in response to the expected tapering, although they remain low by historical standards. They stood at 4.67 percent Friday, up from 4.47 percent a week earlier.

The participation rate is derived from the number of people employed or seeking employment as a percentage of the civilian working-age population. At 63.2 percent, it is the lowest rate in 35 years. It’s even worse for men, who collectively hit a record-low ratio of 69.8 percent.

“Not only is that a record low for men, it’s a record low by a fair amount,” three-tenths of a percentage point, said Keith Hall, the commissioner of the Bureau of Labor Statistics from 2008 to 2012.

Teens and younger workers are most likely to have exited the workforce, said Hall, now a researcher at George Mason University’s Mercatus Center in Virginia.

The unemployment rate ticked down just a tenth of a percentage point in August, the lowest since December 2008, but it remains elevated. The White House saw larger significance in the number.

“The lingering elevation in the unemployment rate primarily reflects a large number of long-term unemployed (those unemployed for more than 27 weeks), while the share of the labor force that has been unemployed for less than 27 weeks has mostly returned to its average during the 2001-07 expansion period,” said Jason Furman, the new head of the White House Council of Economic Advisers.

Within the jobs report, the signs were mixed.

Private-sector hiring was lower than the overall number, with private firms adding 152,000 jobs and the government adding 17,000.

In an encouraging sign, wages rose slightly last month and the workweek expanded a bit.

“Hourly earnings and weekly hours were solid in August, which should support solid income growth and spending on the month,” said Anderson, noting wages have risen 2.5 percent over the past 12 months.

And among the major economic sectors, only finance showed a drop in employment, while most others expanded at a continued modest pace. Retailers hired the most in August, adding 44,000 jobs.

“While the jobs numbers weren’t as strong as anticipated, they indicate a more positive trend,” Jack Kleinhenz, chief economist for the National Retail Federation, said in a statement. “We are expecting further signs of strengthening in the second half of the year. Retailers are making headway but challenges remain.”

The construction sector was unchanged in August, potentially pointing to a slowdown in what had been a recovery in homebuilding and sales of existing homes. And manufacturers added 14,000 jobs in August, growth at a real sluggish level for a sector that’s so labor-intensive.

“The underlying story here is that manufacturing employment continues to growing at a disappointing pace. The sector lost workers for five straight months from March to July, with 39,000 fewer employees during that time,” Chad Moutray, chief economist for the National Association of Manufacturers, wrote in his blog Shopfloor.org. “Over the course of the past 12 months, the sector has added just 20,000 additional workers, or less than 1 percent of the 2.2 million nonfarm payroll workers hired during that time.”