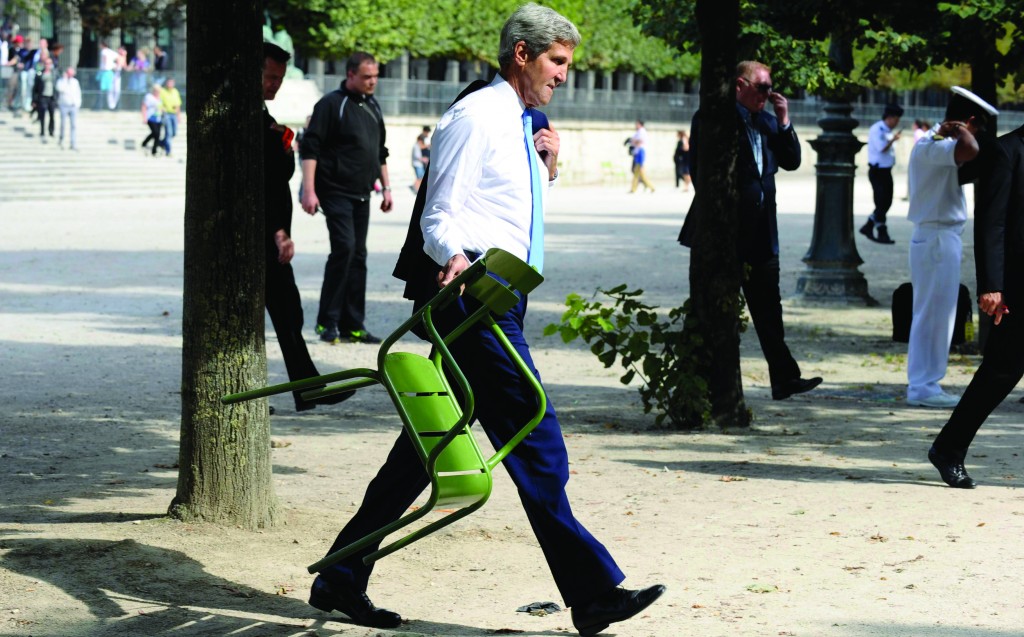 The White House asserted Sunday that a “common-sense test” dictates the Syrian government is responsible for a chemical weapons attack that President Barack Obama says demands a U.S. military response.

But Obama’s top aide says the administration lacks “irrefutable, beyond-a-reasonable-doubt evidence” that skeptical Americans, including lawmakers who will start voting on military action this week, are seeking.

“This is not a court of law. And intelligence does not work that way,” White House chief of staff Denis McDonough said during his public relations blitz Sunday to build support for limited strikes against Syrian President Bashar Assad.

“The common-sense test says he is responsible for this. He should be held to account,” McDonough said of the Syrian leader who for two years has resisted calls from inside and outside his country to step down.

Asked in another interview about doubt, McDonough was direct: “No question in my mind.”

The U.S., citing intelligence reports, says the lethal nerve agent sarin was used in an Aug. 21 attack outside Damascus, and that 1,429 people died, including 426 children.

The actual tally of those killed by chemical weapons is scant compared to the sum of all killed in the upheaval: more than 100,000, according to the U.N.

In an interview Sunday, Assad told U.S. journalist Charlie Rose there is not conclusive evidence about who is to blame for the chemical weapons attacks and again suggested the rebels were responsible.

Asked about Assad’s claims there is no evidence he used the weapons, Secretary of State John Kerry told reporters in London: “The evidence speaks for itself.”

At the same time, Obama has planned his own public relations effort. He has scheduled six network interviews on Monday and then a primetime speech to the nation from the White House on Tuesday, the eve of the first votes in Congress.

Obama faces a tough audience on Capitol Hill. A survey by The Associated Press shows that House members who are staking out positions are either opposed to or leaning against Obama’s plan for a military strike by more than a 6-1 margin.

Added Rep. Loretta Sanchez (D-Calif.): “For the president to say that this is just a very quick thing and we’re out of there, that’s how long wars start.”

Almost half of the 433-member House and a third of the 100-member Senate remain undecided, the AP survey found. 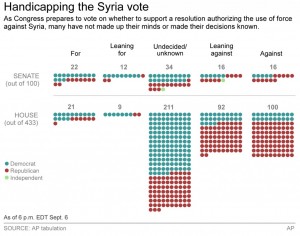 “Just because Assad is a murderous tyrant doesn’t mean his opponents are any better,” said Sen. Ted Cruz (R-Texas).

But some of Assad’s opponents are pleading for aid.

“The world is watching, and Syrians are wondering: When is the international community going to act and intervene to protect them?” said Khalid Saleh, head of the press office at the anti-Assad Syrian Coalition .

On Saturday, a U.S. official released a DVD compilation of videos showing attack victims that the official said were shown to senators during Thursday’s classified briefing. The graphic images have become a rallying point for the administration. Sen. Dianne Feinstein (D-Calif.), chairwoman of the Intelligence Committee, also posted videos on the committee’s website.

But McDonough conceded the United States doesn’t have concrete evidence Assad was behind the chemical attacks.

Recent opinion surveys show intense American skepticism about military intervention in Syria, even among those who believe Syria’s government used chemical weapons on its people.

Congress, perhaps, is even more dubious.

Complicating the effort in the Senate is the possibility that 60 votes may be required to authorize a strike.

Republican Sen. Rand Paul of Kentucky said he would consider a filibuster, but noted the delay tactic was unlikely to permanently nix a vote.

Congress resumes work Monday after its summer break, but a heated debate about Syria is already underway.

Obama planned to address the nation on Tuesday, ahead of Wednesday’s first showdown vote in the Senate over a resolution that would authorize the “limited and specified use” of U.S. armed forces against Syria for no more than 90 days and barring American ground troops from combat. A final vote is expected at week’s end.

A House vote appears likely during the week of Sept. 16.