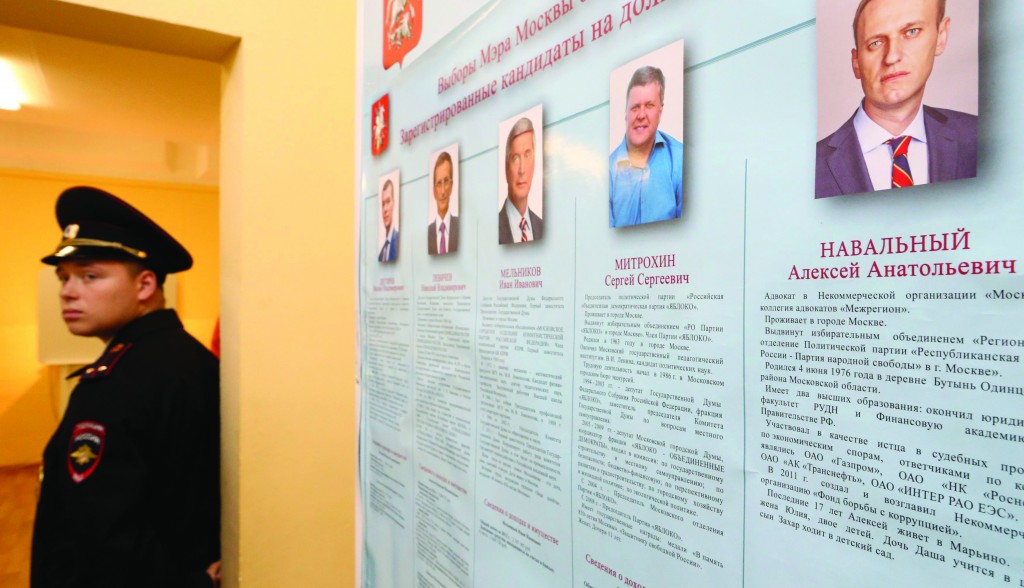 Two exit polls in Moscow’s mayoral election predicted a strong showing Sunday for opposition leader Alexei Navalny, putting him behind the Kremlin-backed incumbent but with the race much closer than expected.

But as election results began to trickle out more than two hours after polls closed, showing incumbent Sergei Sobyanin with a clear majority, Navalny said the slowness in reporting the results and the lack of an official turnout figure raised suspicions that the vote was being manipulated.

“We don’t recognize the results that are currently being announced,” Navalny told reporters at his campaign headquarters. “I call on the Kremlin and the mayor’s office to restrain themselves from falsifications.”

The election has energized Russia’s small opposition in ways that could pose a risk to the Kremlin in the years ahead.

It also could determine Navalny’s fate. He faces time in prison after being convicted of embezzlement in a case seen as part of a Kremlin effort to sideline him, but a strong showing could lead to a shortening of his five-year sentence if the Kremlin felt this would help defuse discontent.

The exit polls by pollsters FOM and VTsIOM, which are both usually seen as favoring Kremlin candidates, put incumbent Sergei Sobyanin in the lead with about 53 percent.

Getting above 50 percent would allow Sobyanin to avoid a runoff, but if he is seen as squeaking through unfairly because of vote-rigging, it could set off protests. Reports of widespread fraud in a national parliamentary election in 2011 triggered the unprecedented demonstrations against President Vladimir Putin’s rule.

Arriving at his local polling station early on Sunday with his wife and children, Navalny said he hoped there would be no vote-rigging at the polls so that voters could choose “the political space they need for a new Moscow.”

Navalny had built an online following through his online anti-corruption forum, but it was the protests of 2011 and 2012 that cemented his status as de facto leader of the opposition. He led street marches that attracted tens of thousands of people from across the political spectrum.

His mayoral candidacy inspired a grassroots campaign like nothing the city had ever seen before. About 20,000 volunteers hit the campaign trail for Navalny, passing out leaflets in the metro or hanging banners on balconies. Navalny held impromptu campaign rallies outside subway stations several times a day.