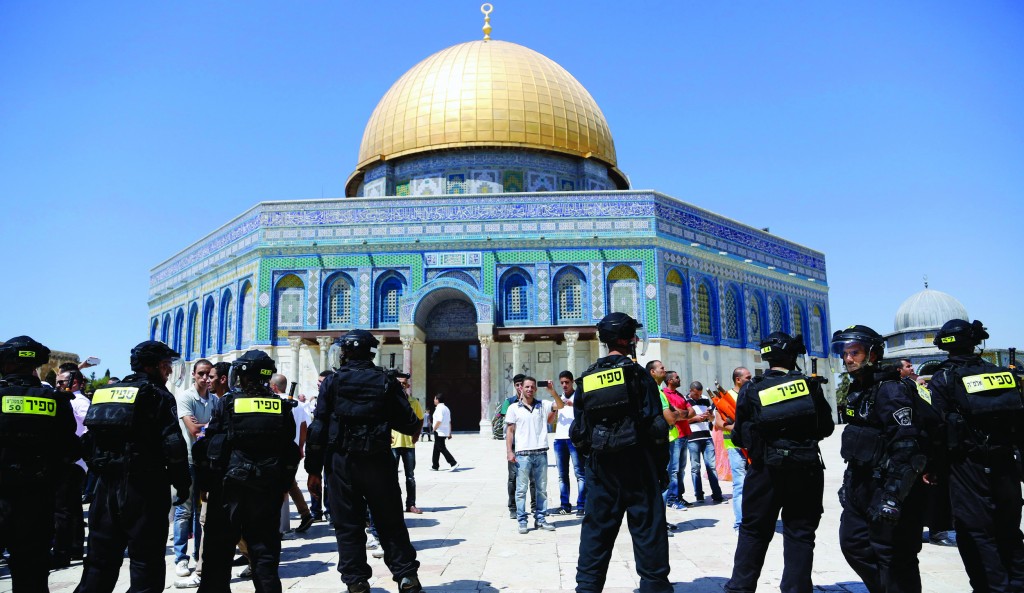 Har Habayis was the scene of Palestinian rioting on the second day of Rosh Hashanah, with hundreds of masked youths throwing rocks at visitors and police. Two policemen were slightly injured and 15 suspects were arrested.

Following Friday prayers at the mosque, dozens of police entered the Moslem compound on Har Habayis, using stun grenades to quell the disturbance.

Police spokesman Micky Rosenfeld blamed the violence on Islamic Movement leader Sheikh Raed Salah, who delivered an inflammatory sermon last week accusing Israel of causing the turmoil in Egypt and the Arab world, and claimed that police were plotting to set fire to Har Habayis on Rosh Hashanah.

“Everything he said in that speech was to incite rioting … and that’s exactly what happened,” said Rosenfeld.

Salah was arrested on Tuesday while en route to the al-Aksa Mosque for the protest organized by the Islamic Movement, called for Wednesday morning.

Rosenfeld said Salah was detained for approximately 24 hours after initially refusing the terms of a court order to stay at least 20 miles outside the capital for six months and pay a bond of 50,000 shekels. However, after finally accepting the court’s terms, he was released outside the capital on Wednesday.

Police intercepted over a dozen buses carrying Muslim extremists to the holy site Wednesday morning ahead of the planned incident, and also arrested seven stone-throwing Arab youths the same day.

Rosenfeld said that after Salah was released, he again incited his followers to riot on Har Habayis on Friday.

Rosenfeld said 15 minutes after the hundreds of officers who were called in during Yom Tov secured the area, the rioting resumed.

“It was right in the middle of Rosh Hashanah, which is something that normally doesn’t happen,” he said. “Hundreds of officers who were observing the Yom Tov were forced to go to Har Habayis to stop the rioting.”