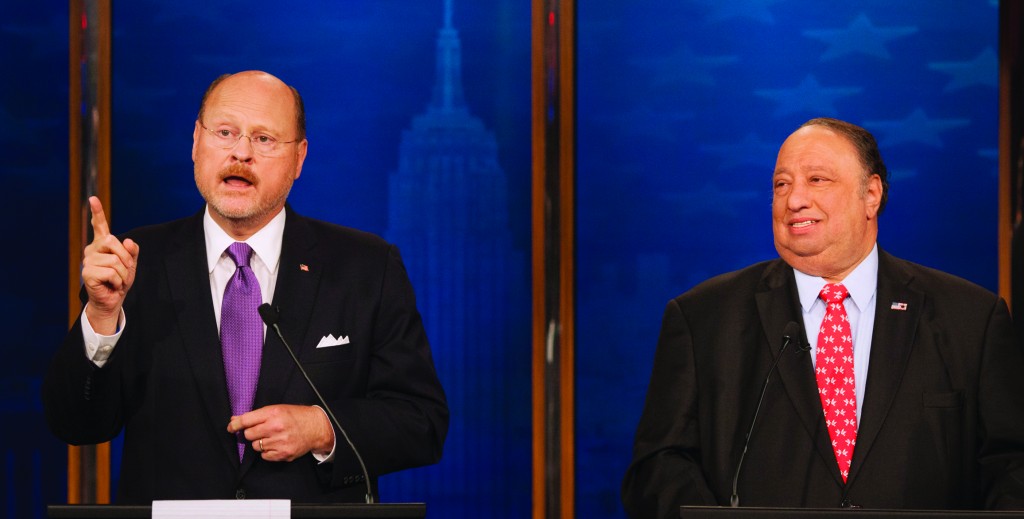 The top two Republican candidates for New York City mayor debated Sunday for the last time before the party primary on topics including the New York Police Department’s policies and the city’s handling of the emergency response on 9/11.

In the often testy debate, former public transit chairman Joe Lhota accused grocery store magnate John Catsimatidis of being a billionaire businessman with no government experience. Catsimatidis countered that Lhota was a bureaucrat out of touch with New Yorkers.

“I’ve served in government in different ways that I choose not to talk about,” said Catsamatidis.

Catsimatidis described Lhota as “more of a technical person,” contrasting that quality with what he called his own visionary capability.

“I’ve been a CEO for 44 years, and I am used to hiring people to perform technical tasks. I’ve hired hundreds of people with the qualifications of Joe,” he said. “But you need a visionary; you need somebody that creates.”

Lhota has had a consistent lead in polls over Catsimatidis, who blanketed the airwaves with ads in recent weeks. Low Republican turnout is expected in Tuesday’s primary in a city where registered Democrats outnumber Republicans by 6 to 1.

The two men traded barbs and expressed exasperation during heated exchanges, with Lhota often shaking his head as Catsimatidis spoke.

And asked whether they had questions for each other, Lhota stared straight ahead and declined to ask his opponent anything.

However, the candidates agreed on many issues.

Both expressed support for NYPD Commissioner Ray Kelly, as well as the department’s controversial street-stop policy and the NYPD’s surveillance of Muslims. Both called for hiring more police officers.

Days before the anniversary of the Sept. 11 attacks, Catsimatidis criticized Lhota for his role at the time as deputy mayor in Rudy Giuliani’s mayoral administration.

Catsimatidis questioned the city’s handling of flawed communications among first responders on 9/11, saying that after the first World Trade Center bombing in 1993, the city “had the ability to fix those phones.”

Lhota said he took “responsibility for what happened.”

But he said he and others succeeded in getting the city back to normal after 9/11, from traffic and parking to garbage and paychecks.

When Catsimatidis suggested Lhota was part of a decision to build the city’s emergency management center “on a high floor” in 7 World Trade Center, Lhota pointed out that it was on the third floor, which he didn’t consider “high.”

Among Democrats, Bill de Blasio has surged in the polls. The general election is Nov. 5.