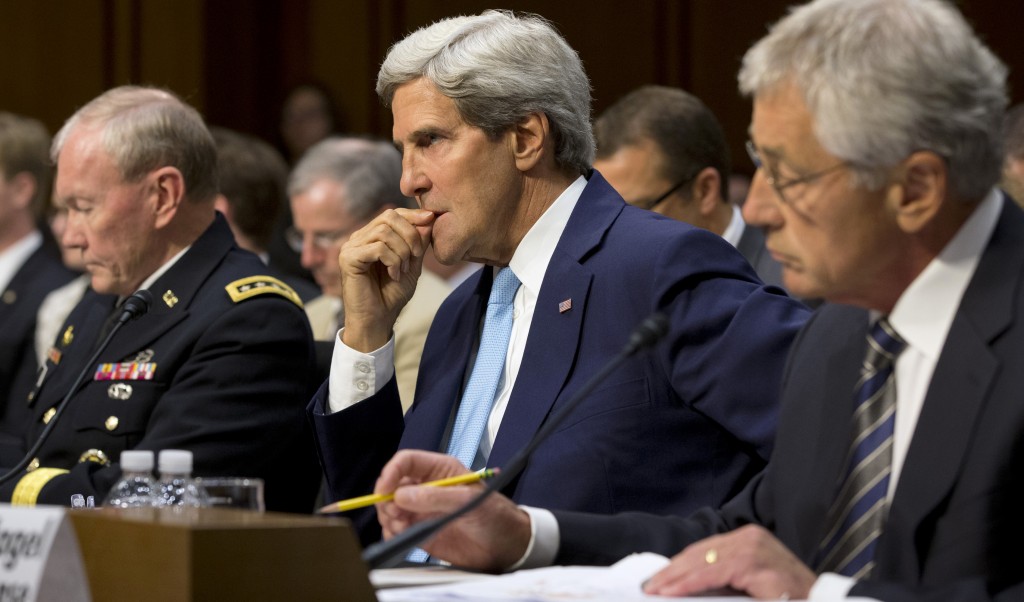 President Barack Obama won critical support from House Speaker John Boehner for a punitive strike against Syria on Tuesday, and senior Cabinet officials labored to convince Congress that Bashar Assad’s government must be punished for a suspected chemical weapons attack the administration blames for more than 1,000 dead.

The leader of House Republicans, Boehner emerged from a meeting at the White House and said the United States has “enemies around the world that need to understand that we’re not going to tolerate this type of behavior. We also have allies around the world and allies in the region who also need to know that America will be thereand stand up when it’s necessary.”

Boehner spoke as lawmakers in both parties readied changes in the president’s requested legislation, rewriting it to restrict the type and duration of any military action that would be authorized, possibly including a ban on U.S. combat forces on the ground.

Secretary of State John Kerry, lead-off witness at a Senate Foreign Relations Committee hearing, said, “President Obama is not asking America to go to war.” And yet, he added, “this is not the time for armchair isolationism. This is not the time to be spectators to slaughter.”

Obama said he was open to revisions in the relatively broad request the White House made over the weekend. He expressed confidence Congress would respond to his call for support in a military action against Assad, whose government the president said used chemical weapons indiscriminately and “killed thousands of people, including over 400 children.”

The president met top lawmakers at the White House before embarking on an overseas trip to Sweden and Russia, leaving the principal lobbying at home for the next few days to Vice President Joe Biden and other members of his administration.

Defense Secretary Chuck Hagel and Gen. Martin Dempsey, chairman of the Joint Chiefs of Staff, were on the witness list for the Senate hearing, the first of several Congress is expected to hold in the run-up to a vote as early as next week on Obama’s request for congressional backing for a strike against Syria.

The Obama team sat shoulder-to-shoulder at the Capitol as, a few hundred miles away, United Nations Secretary-General Ban Ki-moon urged caution. He said any punitive action against Syria could unleash more turmoil and bloodshed, and he cautioned that such strikes would be legal only in self-defense under the U.N. Charter or if approved by the organization’s Security Council. Russia and China have repeatedly used their veto power in the council to block action against Assad.

Among major allies, only France has publicly offered to join the United States in a strike, although President Francois Hollande says he will await Congress’ decision. The British House of Commons rejected a military strike last week.

Yet the president’s decision to seek congressional approval presents lawmakers with a challenge, as well.

Even some of Obama’s sternest critics in Congress expressed strong concerns about the repercussions of a failure to act.

House Majority Leader, Eric Cantor (R-Va.) said after Tuesday’s White House meeting that a failure to respond to the use of chemical weapons “only increases the likelihood of future WMD (weapons of mass destruction) use by the regime, transfer to Hizbullah, or acquisition by al-Qaida.”

Apart from the meeting with Obama, the White House provided closed-door briefings for members of Congress.

Others were firmly opposed. Sen. Jim Inhofe of Oklahoma, said on Fox News, “It may sound real easy when people like Secretary Kerry say that ‘it is going to be quick and we’re going to go in, we’re going to send a few cruise missiles, wash our hands and go home.’ It doesn’t work that way. This could be a war in the Middle East, it’s serious.”

Sen. Rand Paul (R-Ky.), who has close ties to tea party groups, said he probably would vote against authorizing Obama to use force. But he said it also wouldn’t be helpful to amend the resolution in a way that constrains the president too much to execute military action, if authorized.

Democrats, too, were divided, although it appeared the administration’s biggest concern was winning support among deeply conservative Republicans who have battled with the president on issue after issue since winning control of the House three years ago.

Obama’s trip this week includes stops in Stockholm and then St. Petersburg, Russia, where he will be attending the Group of 20 economic summit.