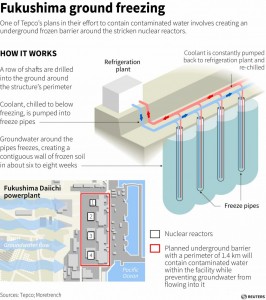 The Japanese government announced Tuesday that it will spend $470 million on a subterranean ice wall and other steps in a desperate bid to stop leaks of radioactive water from the crippled Fukushima nuclear plant after repeated failures by the plant’s operator.

The Fukushima Dai-ichi plant has been leaking hundreds of tons of contaminated underground water into the sea since shortly after a massive 2011 earthquake and tsunami damaged the complex. Several leaks from tanks storing radioactive water in recent weeks have heightened the sense of crisis that the plant’s owner, Tokyo Electric Power Co., isn’t able to contain the problem.

“Instead of leaving this up to TEPCO, the government will step forward and take charge,” Prime Minister Shinzo Abe said. “The world is watching if we can properly handle the contaminated water but also the entire decommissioning of the plant.”

The ice wall would freeze the ground to a depth of up to 30 meters (100 feet) through a system of pipes carrying a coolant as cold as minus 40 degrees Celsius (same as minus 40 Fahrenheit). That would block contaminated water from escaping from the facility’s immediate surroundings, as well as keep underground water from entering the reactor and turbine buildings, where much of the radioactive water has collected.

The project, which TEPCO and the government proposed in May, is being tested for feasibility by Japanese construction giant Kajima Corp. and is set for completion by March 2015.

This article appeared in print on page 2 of the September 4th, 2013 edition of Hamodia.